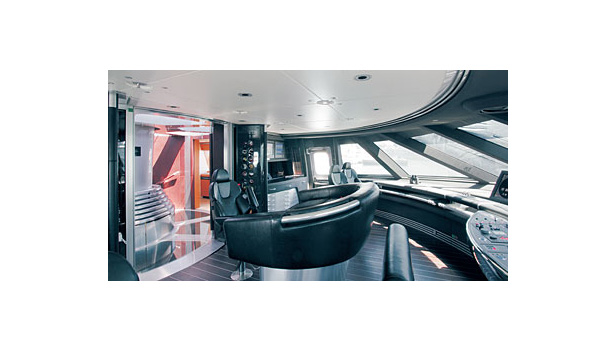 With her nearly 200-foot-tall masts, the 289-foot Perini Navi Maltese Falcon calls to mind a skyscraper sprung loose on the sea. Most sailors who step aboard experience an unsettling moment when they realize that not one line lies on the sprawling teak decks. By the time visitors make their way to the bridge and see the single, desk-size, push-button panel that controls all 25,800 square feet of material on the 15 sails—allowing the Maltese Falcon to be operated by a single person if necessary—most will conclude that this vessel represents the future of sailing yacht construction.

Her owner, 75-year-old venture capitalist Tom Perkins, studied electrical engineering and computer science at the Massachusetts Institute of Technology before earning an MBA at Harvard University, and he has driven the development of several large Silicon Valley companies. He put his technical experience to use during the Maltese Falcon’s construction, overseeing every plan sent by naval architect Gerard Dijkstra and every detail of the build. In one of the boat’s most ingenious pieces of engineering, a flexible feeder at the foot and head of each sail works in concert with a collar that moves up or down on an Archimedes screw to maintain the vertical tension required to furl the vast sails.

The interior includes a main salon that opens to the aft deck, a reading room, a study, a large dining room, and six cabins, the most extraordinary of which is the full-beam master suite with his-and-her bathrooms and a gym. The interior decor, by veteran British yacht designer Ken Freivokh, showcases Perkins’ collection of abstract paintings and objets d’art. Perini yachts typically feature warm wood tones and neutral, elegant fabrics, but the Maltese Falcon’s interior design scheme liberally incorporates reflective glass and bold ebony accents. In one of his more notable touches, Freivokh replaced the traditional circular stairwell with what could be called a leather-walled, glass-stepped sculpture that leads from the guest cabins to the deck. In the dining room, a 16.4-foot-long glass-and-leather table sits atop a single carbon-and-aluminum leg, while in the salon, a striking laser-cut image of a falcon appears to fly over a marble-and-aluminum mantelpiece.

Perkins, who reportedly invested $100 million in the vessel, takes the Maltese Falcon’s electronic helm frequently. During the yacht’s first six months at sea, her 17-person crew sailed her about 13,800 miles. In all instances, including in winds as high as 78 mph, the Maltese Falconreportedly functioned admirably. She averages 16 to 23 mph under sail and topped 27 mph during a recent transatlantic crossing. Perkins gives the yacht up from time to time for charter guests, who pay a reported weekly base rate of about $470,000.