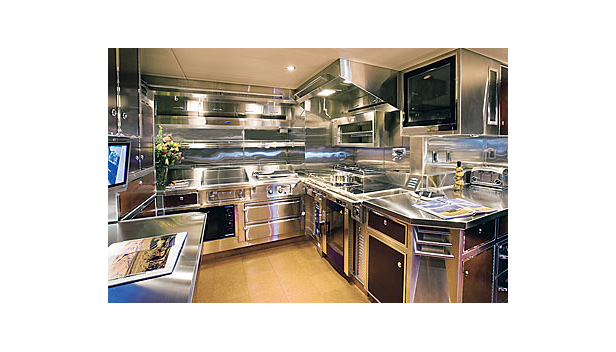 Westport shipyard’s Vangois the first of its 164-foot series and the first composite production yacht of its size ever built. With its lightweight construction, the $34.5 million vessel achieves more than 29 mph at half load despite a generous beam and a draft suitable for the shallow waters of such destinations as Florida, the Bahamas, and southern New England.

As Westport delivers additional 164s, it will not change the structural bulkheads, and it plans to maintain the size of the crew quarters, engine room, and wheelhouse. But customers can swap the elevator for storage space, choose a master suite instead of a skylounge, and have a guest cabin instead of a gym. Designer Donald Starkey’s spacious, well-conceived interior scheme should please most boaters, but some modifications will be possible. Vango displays various combinations of mahogany and pommele sapele in the furnishings and bulkhead panels, and high-gloss lacquer lightens the appearance of some furniture pieces. Rich, upholstered panels add texture, color, and softness and help attenuate noise.

On the lower deck, Vango has three guest cabins, each of which connects to the crew area. This configuration enables a crew member to make up the cabins without having to carry loads of linens up or down the main staircase. The bridge deck holds a bar, VIP suite, and lounge, and the main deck contains two salons and an expansive master suite with two baths. The exterior spaces include a lounge on the main aft deck, two lounges on the bridge deck, and an enormous sundeck.

The formidable naval architect William Garden, who has created hundreds of boats in a career that has spanned more than 60 years, designed the high-performance, semidisplacement hull. Garden, Starkey, and Westport president Daryl Wakefield have worked together before, on the custom 160-footer Evviva, which was built for Orin Edson, the majority owner of Westport, in 1993.