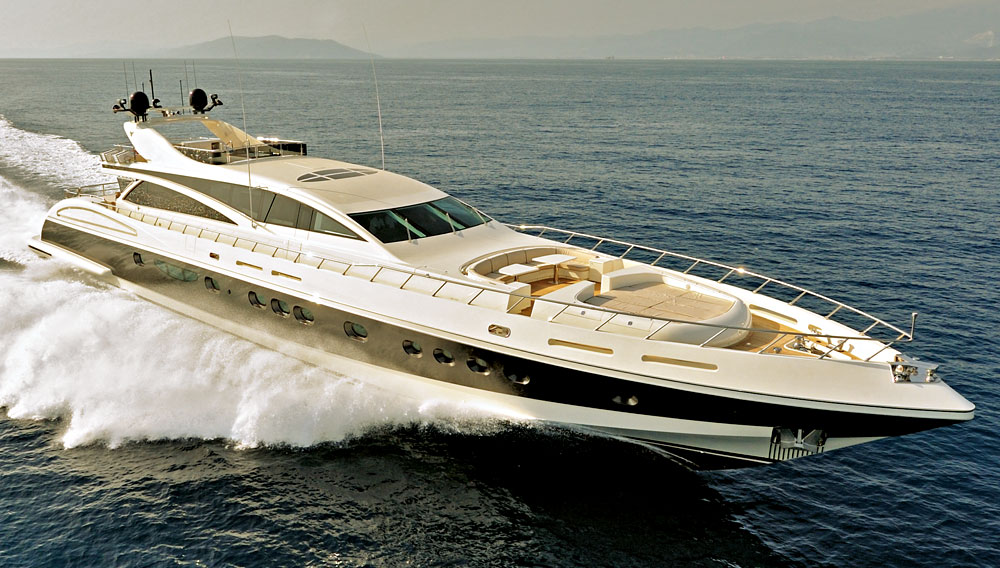 Despite its size, the 141-foot Leopard 43m remains sporty, thanks to a trio of 2,400 hp MTU diesel engines and a planing hull. Propelled across the top of the water by all that power, the yacht can achieve a remarkable top speed of 35 knots. An alternative booster engine adds even a few more knots of velocity.

The 43m is the fourth member of the Leopard line; the Pisa, Italy–based builder also offers 102-, 112-, and 152-foot models and plans to complete a 184-foot model next year. Like all Leopard models, the 43m features svelte architectural lines, useful exterior space, and an uncluttered interior.

Italian firm Studio Bacigalupo penned the naval architecture and exterior layout, incorporating two decks plus a large flybridge into the design. The foredeck offers a sizable, 112-square-foot lounging pad and a large U-shaped seating and casual dining area. Additional sun pads are located on the aft deck, which also holds a five-seat dining area shaded by the flybridge. The 409-?square-foot bridge deck offers a six-person hot tub and plenty of space for lounging and sunbathing.

In 2008, Italyachts, then a subcontractor of Leopard, began construction of the first 43m, at the Leopard shipyard. Prior to the yacht’s launch in April 2010, Leopard split with its parent company, the Rodriguez Group, which retained the Italyachts brand. As a result, both Leopard and Italyachts now offer 43m models based on this initial launch.

The interior of the first 43m features dark wenge and ebony woods paired with white leather wall panels and furnishings. The main-deck salon and dining areas have a wide-open layout and receive an abundance of natural light through windows that run the length of the space.

On the lower deck, the 43m accommodates as many as nine passengers in four staterooms, and it has quarters for seven crew members.