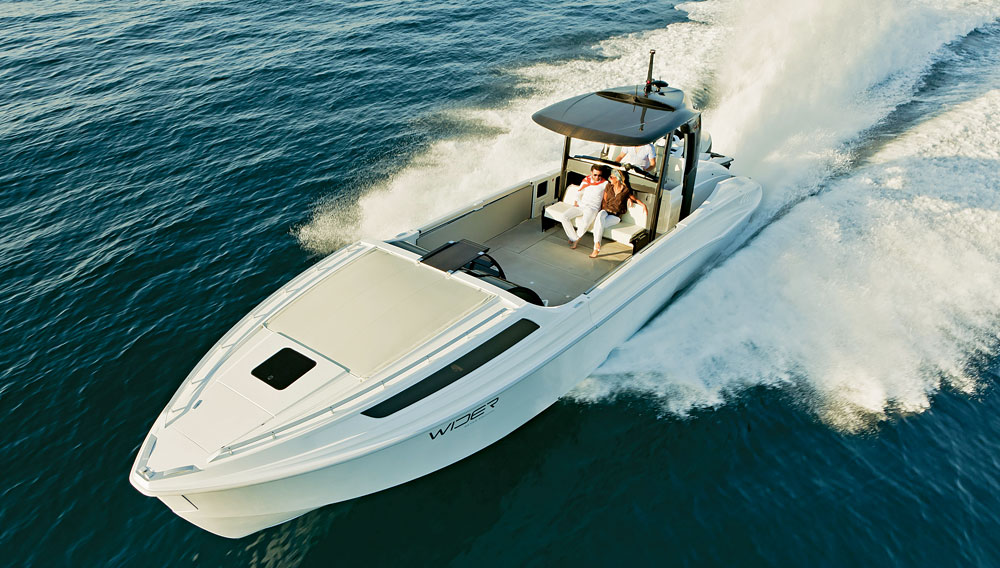 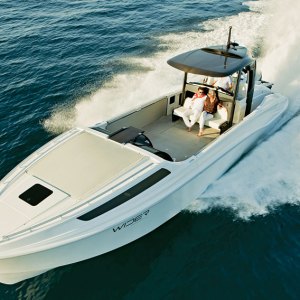 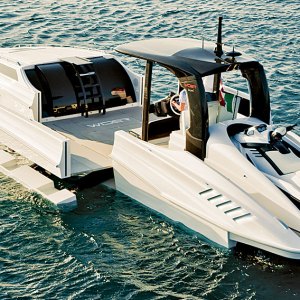 Tilli Antonelli, who founded the Pershing yacht company in 1981, made a splash last April with the debut of the inaugural model from his new brand, Wider. With the Wider 42, the industry veteran and his dream team of engineers and designers have successfully redefined the weekend-cruiser category.

Equipped with a pair of optional 480 hp Cummins engines (two 370 hp Yanmar motors come standard), the Wider 42 easily exceeds 50 knots. The 42-foot cruiser’s speed owes in part to its double-stepped racing hull, which enables the boat to reach a plane without excessive bow rise, thus minimizing drag. Wider constructs 70 percent of the boat from carbon fiber in order to achieve a relatively light displacement of 21,000 pounds. As a result, the vessel offers efficiency—it burns less than 30 gallons of fuel per hour at a 40-knot cruise speed—and has a range of more than 350 nautical miles.

The Wider 42 is also in a class of its own in terms of comfort. A sleek belowdecks cabin features a large C-shaped seating area that converts to a double sleeping berth. Additional amenities include a galley with a sink, a refrigerator, a freezer, and an icemaker, as well as a full head with a stand-up shower and carbon-fiber toilet.

However, the boat’s highlight—and the impetus for the company’s name—unfolds from the above-deck seating area. While the boat is at anchor, “wings” open up and out with the push of a button—nearly doubling the boat’s 11.6-foot width—while floats drop into the water to create a stable platform with minimal roll. For the expanded space, Antonelli designed modular inflatable pods that serve as sofas and can be easily deflated and stowed when not in use. The area is also equipped with a six-speaker audio system and a carbon-fiber table that lifts up from the floor.

The Wider 42 is offered with an optional customized version of SeaDoo’s top-of-the-line GTX Limited personal watercraft, which slides into the water from its dedicated storage space at the stern. The boat, with a starting price of roughly $1.12 million, is the first of three models that Wider plans to build over the next several years. The company is taking pre-orders for its next model—a 150-foot yacht dubbed the Wider 150—which will feature a hybrid propulsion system and wings that fold down from the stern to create a large swim platform.