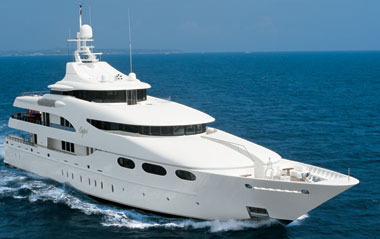 Capri, christened after the Italian island and the Capri Palace Hotel & Spa, where the owners finalized the boat’s details, is an elegant, sweeping, five-deck motor yacht that captures the essence of its owners’ contradictory vision: a contemporary vessel with traditional overtones. Modern amenities include a recording studio, an observation lounge, a gym, a transom garage, and a 1,700-bottle wine cellar, as well as a Chris-Craft runabout and Ribtec inflatable.

Capri emerged from the drawing board of Glade Johnson, a Pacific Northwest designer who has gained a reputation for being equally adept at creating classic-looking sailboats and futuristic motor yachts. It was built by Germany’s Lürssen yard and launched last summer. Johnson worked closely with the owners in designing the finer details of Capri and enjoyed playing with the classical and contemporary contrasts to create the unique look. However, his design created some technical challenges for Lürssen. “After the launch, I gave Glade a ruler as a present,” jokes Michael Bremen, Lürssen’s director of sales. “His superstructure was all curves and no straight lines.”

With naval architects and engineers making up nearly a third of its 1,000-person workforce, Lürssen proved itself capable of delivering such intricate detail. “We try to put our engineering background to work on smaller yachts in terms of noise and vibration abatement,” says Peter Lürssen, the company’s chairman. He adds that engineering prowess was a primary reason why the owners chose Lürssen over other shipyards.

Although Capri is one of the world’s larger megayachts, Lürssen can dub it a “smaller yacht” because of the yard’s experience building behemoths such as the 377-foot Pelorus and the 413-foot Octopus. In fact, technology from the larger boats, including space-age soundproofing, a telescoping foredeck mast, computerized controls on light fixtures, at-anchor stabilizers, state-of-the-art helm electronics, and exhaust soot collectors, were all incorporated into Capri. The yacht carries 39,600 gallons of fuel, and when cruising at low speeds, it has a range of 10,000 miles—enough to cross the Atlantic.

The technical features, however, do not overwhelm Johnson’s design. The saloon and adjoining dining area are formal and exhibit a European sensibility, with rich lacquered anigre panels, maple burl with ebony inlays, and silk panels for the walls. The owner’s suite is stately, with an office featuring husband-and-wife desks, a large stateroom, and an adjoining child’s cabin. The suite also features a unique, pale-green onyx master bath framed by two layers of lighted glass adorned with a landscape of Capri. “The owners love staying at the Capri Palace Hotel,” says Johnson. “It has white stucco walls, dark furniture, and a gorgeous view. We tried to capture that feeling in the sky lounge, with its white walls and furniture. Custom light fixtures deliver a soft, candlelike atmosphere.”

Capri has an aft exterior deck with a Jacuzzi just behind the gym, four guest suites, each with its own bath, and crew quarters that are separate from the guests’ spaces.

Johnson says he wanted Capri to impart a sense of light and space. He achieved that goal most notably in the observation lounge on the fifth deck, which opens to a patio. “We designed the seating so it was actually six inches higher than the deck, so the window level could be kept very low and you can see the water,” explains Johnson. In other words, it is the ultimate room with a view.

The proof of Andrea’s success lies in its usage. During its first four months of cruising, the 126-foot Delta Marine expedition yacht logged nearly 7,000 miles. As their initial design brief stated, Andrea’s European owners planned to spend many of their days aboard the American vessel.

The yacht, which has a range of approximately 7,000 miles and a 16 mph top speed, can accommodate 10 passengers and is manned by a six-person crew. The blue-and-white exterior exhibits an expedition yacht’s signature industrial look, but the plush interior conveys a different atmosphere altogether. The full-beam master suite is located forward on the main deck, while four guest staterooms are situated belowdecks.

Andrea’s owners spent almost a year meeting with Delta designers, engineers, and executives to perfect their 126-foot vessel. Their preparation and planning have clearly paid off.

In 1997, Oceanfast delivered Perfect Prescription, a 150-foot megayacht, to its American owner. He liked the yacht so much that he commissioned the Australian shipyard to build the 177-foot second-generation edition of Perfect Prescription. This time, however, advances in communication technology allowed for a completely different design and construction process.

Different time zones presented a challenge; the owner lives in the United States, Oceanfast is based in Western Australia, and designer Tim Heywood has an office in London. Sketches were e-mailed from Heywood to the owner for approval and forwarded to Oceanfast, which would then send back detailed blueprints. Once production of Perfect Prescription began, the owner monitored its progress through the use of webcams that Oceanfast had installed in the yard.

The 30-month project resulted in a five-deck wonder that includes a media room with a 60-inch plasma screen, a forward master suite with a silk carpet and his-and-her bathrooms, and marble-lined showers in each of the four guest staterooms.

Dream, which is a few inches shy of 170 feet, is a steel-and-aluminum stunner with an interior by Donald Starkey, naval architecture by De Voogt, and the level of sophistication expected of Feadship.

Dream is not the first Feadship to be fitted with an advanced stern thruster, but it is the first yacht to have the thruster linked to a Dynamic Positioning System. The system enables the yacht, without assistance from the anchor or its engines, to move sideways, stay on heading, or remain at a specific angle while minimizing roll. At sea, the thruster is invisible to Dream’s 12 guests, but they can nevertheless experience the benefits of the system. During aft-deck dinners, when guests hear nothing from the Caterpillars but still see changing scenery as the yacht slowly moves sideways, they can credit Feadship’s latest innovation.