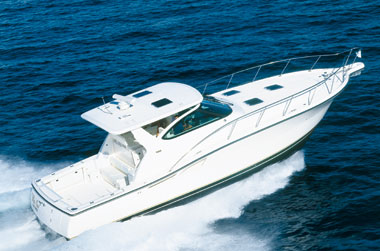 Sexy details give the flagship more appeal than its predecessor.

When Tiara Yachts introduced its new Open series flagship last year, emotions were somewhat mixed. The debut of the 4200 Open was exciting, but it meant the retirement of the 4100 Open—a design that attracted approximately 150 owners during its seven years of production. “It was a tough decision for us, but at the same time, it was quite easy,” says marketing manager Rob Everse. “We got to take a lot of the things customers had given us in feedback and use them in the 42.”

The 4200 Open, a boat designed to accommodate both cruisers and anglers, incorporates three standout features that were included on other recent Tiara designs: a composite wraparound windshield, a custom-designed hard top, and a sloping sheerline. The windshield is an improvement on the aluminum frames Tiara once used. Tempered glass is housed in a curved frame, making sight lines from the helm virtually distortion-free. “When you’re standing at the helm or sitting, you’ve got a clear panoramic view of everything around you,” Everse says.

About 20 percent of Tiara’s customers are hard-core fishermen who want tuna towers, so the popular hard top is an option—a $24,700 addition to the boat’s $542,580 base price. The sloping sheerline is the most noticeable change, giving the new flagship a sleeker look and eliminating the need for a step in the transition between the cockpit and foredeck. “Just a couple weeks ago, I was talking with a couple from Naples, Fla., and that was a big factor in their decision,” Everse says. “The wife would go up there to handle lines, and she felt very insecure on other models.”

John Garland, Tiara’s vice president of design, says the styling is meant to update the appearance of the 4100 while maintaining the features and quality that made it such a success. “We try to be reasonably progressive in our styling so that it doesn’t look old-fashioned, but we don’t ever lose sight of the fact that our customers want enough classic styling that it won’t become outdated,” he says. “The form definitely follows the function. We won’t compromise function for styling or for anything else.”

The 4200’s top speed is approximately 40 mph. “It’s big enough to feel like you’re on a yacht, but small enough to feel like a performance boat,” Garland says. Base engines are twin 535 hp Cummins QSM11s, but 660 hp Cummins engines (raising the boat’s price to $576,280) and 700 hp Caterpillar C-12s ($592,010) are also available. Recently, Tiara added a third interior layout option with a second enclosed stateroom.

Everse believes the 4200 Open will appeal both to customers interested in purchasing a larger boat and to those who want a smaller craft. “We get some on their way up, and some on their way down,” he says. “We’ve got a lot of megayacht owners who say, ‘This is the boat I get to drive. This is where I have fun.’ ”

When Lazzara Yachts launched the Lazzara 80 three years ago, prospective owners marveled at how such a comfortable and spacious motor yacht could reach speeds exceeding 30 mph. The next-generation yacht, the open-flybridge Lazzara 80E, ups the ante by boasting a top speed of nearly 38 mph.

The Tampa, Fla., boatbuilder fitted the 80E with twin 1,550 hp Caterpillar engines, which make the boat one of the swiftest vessels in its class. Comfort, however, does not suffer at the cost of performance. Owners work with Chris DeLashmutt, Lazzara’s designer, to customize their interiors, which can be fitted with hot tubs, pop-up plasma televisions, and marble bathrooms, among other amenities.

Those owners could now include more Europeans, as Lazzara partnered with Dutch builder Heesen Yachts last year to distribute the 80E overseas.

Hail to the Chief

The aroma of baked cheese and the sight of an often-used pasta maker prove that the galley of the Benetti Tradition—and presumably the entire yacht—sees heavy use. The 99-footer, delivered last October, is the first in Benetti’s series of 30-meter boats. The Italian manufacturer plans to build three each year.

This particular Tradition, which accommodates eight guests and five crew, cruised mostly in the Bahamas during its first year. As with all Benettis, the centerpiece of the yacht is the full-beam master suite. Light pours into the bedroom from front and side windows, and there is a plasma television that can be tucked away when not in use. The bathroom features a Jacuzzi, a glass shower, and his-and-her sinks. The vessel’s other highlight is its sun-soaked flybridge, where a bar and cappuccino machine offer cold and hot beverages. Considering that the owner of this boat is Benetti CEO Paolo Vitelli, we assume that if the first Tradition is lacking in any way, the ensuing models will address those shortcomings.

Production yacht may not be an appropriate term for the Wally WallyPower 118. Wally has completed only one of the machines, which flaunts one of the most unusual designs on the water, and as of earlier this year, the $24 million WallyPower 118 was still available for purchase. However, the company expects to build additional WallyPowers. “I really hope to sell and produce more series of this boat,” says Wally President Luca Bassani, who cites nations’ navies and coast guards as potential clients.

The yacht peaks at 70 mph, thanks to its deep-V bow and three 5,600 hp gas turbines. Air is funneled through inlets built on the sides of the WallyPower, giving the turbines greater power via higher revolutions and also cooling the boat’s engine room. Wally conducted tests on a scale version of the 118-footer at Ferrari’s wind tunnel in Maranello, proving that the boat is tuned for high performance.