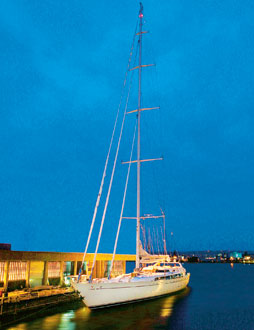 A graceful yacht smashes all records.

Passion and curiosity can often be a potent combination and, in the case of the recently launched Mirabella V, the catalyst for a journey into uncharted waters. The 247-foot yacht, brainchild of former Avis Chairman and CEO Joe Vittoria, overcame a number of technical hurdles on its way to becoming the world’s largest single-masted sloop.

Twice as heavy and 60 percent longer than the next-largest single-masted sailboat, Mirabella V weighs approximately 1.7 million pounds and has a sail area of 36,500 square feet, four miles of rigging, and a 290-foot carbon fiber mast. The 330,600-pound keel can retract from 33 feet to 13, allowing Mirabella V to cross the Atlantic or visit shallow-water ports in the Caribbean. However, the truly special characteristic of the sloop is its speed: Mirabella V can sail at more than 20 mph. “Performance is very important to me,” says Vittoria. “I saw this as the next step in breaking the size barrier without compromising speed.”

Vittoria is no stranger to the challenges involved in building oversize sloops. In the 1990s, he commissioned 133-foot Mirabella and 137-foot Mirabella III, sister ships that he now makes available for charter. “I’m passionate about sailing and get frustrated with the number of powerboats out there,” says Vittoria, a lifelong sailor. “I wanted to see if we could design a fast sailboat that is beautiful and comfortable, and move with nature rather than with an engine.”

In other words, he wanted hyperspeed for a hyperyacht. He worked for several years with the late sailing master Bob Derecktor to conceive his opus—initially planned for 190 feet in length—before turning to designer Ron Holland in 2000. Holland had worked on Felicità West, the 210-foot aluminum yacht built by Perini Navi, and his experience with that vessel helped him solve some of the technical issues encountered while designing Mirabella V. “This has been the most difficult yacht I’ve done,” says Holland, estimating that his firm invested 15,000 hours in the project. “We often had to go back to the drawing board and calculate from first principles. The engineering side was a major challenge because the pressure on the sails and keel was so much higher than any sailboat had ever experienced before.”

Vosper Thornycroft, a British corporation and builder of military vessels, signed on to bring Mirabella V from Holland’s drawing board into the real world. (The company has since been renamed the VT Group.) “When you build a warship, you’re doing similar engineering,” says Paul Johnson, the owner’s project manager. “In the early stages, we had well over 30 designers and engineers working on it. They produced over 2,000 drawings.”

Johnson says the unsung hero of the project was High Modulus, the marine engineering firm that designed the carbon fiber mast. At its widest point, the mast is less than 6 feet across, but it is designed to bear at least twice the pressure of any other sailboat’s mast. More than 11,000 pounds of cable are tucked into the hollow center of the mast, including sensors that monitor the sails’ performance.

As an alternative to a larger custom motor yacht, Mirabella V can be chartered for approximately $250,000 per week. Luciana Vittoria, Joe’s wife, decorated the six guest staterooms using fine Italian silks and antiques. Mirabella V also has an opulent saloon, a dining room that seats 20, and a gym with a sauna. On a separate deck, the owners’ private area covers 1,184 square feet and includes a bedroom, library, and sitting room. The exterior features an alfresco dining area aft and a 1,500-square-foot sky deck. “You can stand on deck and feel the excitement of sailing at speeds you couldn’t ever dream of on a boat this large,” says Vittoria. “I get goose bumps when I think about it.”

When nautical heavyweights combine their efforts on one project, something special is often produced. Whisper, a 116-foot aluminum sloop with naval architecture by the Fontaine (formerly Ted Hood) Design Group, interior styling by London designer Andrew Winch, and construction by Dutch boatbuilder Holland Jachtbouw, is the sparkling result of this first-time collaboration.

Whisper, the owners’ first boat, was built for a heavy charter schedule when it is not in use for family cruising. While charter guests will most likely sail in ideal conditions, Fontaine sculpted Whisper’s keel to perform in all weather. Inside the sloop, Winch designed a 27-foot-wide full-beam master suite with a private entry and an office. And he included three guest staterooms that are located amidships. Guests can enjoy formal dining in the main saloon, which also features an entertainment system. A five-member crew runs the sloop, which is available for approximately $50,000 per week during its charter season.

In 2001, during construction of its most recent sailboat, Maine boatbuilder Hodgdon Yachts had to relocate to another shipyard; Scheherazade, the 154-foot vessel under construction, was simply too big for its facility. The boat was more than twice the size of the company’s previous yacht, and at the time, it was the largest craft under construction in the United States.

Scheherazade’s size may be overwhelming, but the interior includes minute details that are equally impressive. Hodgdon hired local craftsmen to produce more than 500 handmade works such as wood-carved shells that are displayed throughout the vessel. Such pieces showcase the classic approach to the interior design, but the vessel includes modern technology as well; the owner can manage climate, entertainment, and hydraulic systems from one computer.

The owner of Felicità West, the Perini Navi sloop launched last April, had previously sailed aboard two of the Italian manufacturer’s vessels. However, their lengths—142 and 165 feet—left him seeking a more substantial boat. So when he commissioned Felicità West, he requested that Perini Navi build the largest sailboat in the company’s history: a staggering 210 feet.

Naval architect Ron Holland contributed to the ketch’s design, marking the first time Perini Navi had ventured outside the company to complete one of its sailboats. Based on the owner’s wishes, Holland, along with designer Nuvolari-Lenard, created a superstructure that sailed much lower on the water than traditional Perini Navi vessels. Inside, the Perini Navi team constructed a clean, roomy interior that rivals those of similarly sized motor yachts. Features aboard Felicità West include a library, a sundeck, and a spacious master suite located at the boat’s stern. Despite its interior accoutrements, Felicità West still manages a top speed of more than 18 mph under sail.