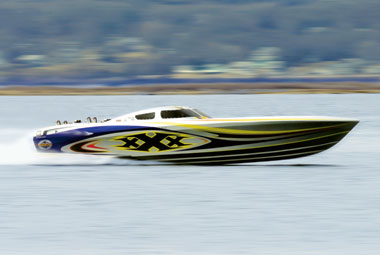 The V-bottom rocket surpasses all expectations.

Although the 47 GTX had yet to be completed, Paul Fiore, Outerlimits’ vice president of sales, issued a bold declaration for the boat last year. “It will run faster than the 42,” Fiore said at the time. “It will run in the 150 mph range.”

Outerlimits, which was founded in 1993, has evolved into an elite manufacturer of highly customized, highly powered boats. The boats run faster than virtually all competing V-bottoms and have proven to be competitive against the top catamarans as well, while offering more forgiving rides than the two-hulled craft.

Outerlimits constructed the GTX using epoxy resin so that it would ride smoother at higher speeds. The company also developed a process to blend the right ratio of epoxy resin to glass for use in the boat’s laminate. “With vinyl, you have 20 minutes to work and cure it,” explains Paul. “With epoxy, you get eight hours of working time. You can build a lot of the boat in one shot and get everything exactly perfect. You do all the construction, put it into a large oven, and cure it for a few days. Once it’s out of the mold and into the sun, it doesn’t change shape. Raceboats with vinyl have terrible finish because they change shape.”

The boat, which is equipped with a quarter canopy, has a low profile to improve its center of gravity and high-speed handling. While the GTX is capable of winning its share of poker runs, it is comfortable enough for more casual cruising. The cockpit features five bucket seats that secure its occupants—with footrests and grab handles as additional safeguards—during wide-open runs. The cabin can be equipped with air-conditioning as well as a flat-screen TV and a DVD player. The real entertainment system, however, is the sound of the howling Sterlings and the sight of other speedboats fading fast behind the GTX.

Fountain Powerboats has a sterling reputation as a production manufacturer. But the North Carolina company, which constructs fishing boats and cruisers as well as speedboats, has ventured into the realm of custom building with its Fountain Lightning 35. The 35-foot boat, which displays stunning graphics that rival the paint jobs of smaller builders’ vessels, reflects Fountain’s shift toward custom manufacturing and more intricate detailing on its high-powered machines.

The Lightning comes standard with 525 Mercury engines so the boat can run in the 90-mph range, although a modified pair of Mercuries can propel the twin-step Lightning to more than 100 mph. Two rigid bolster seats, a flat rear bench, and a spacious forward V-berth provide enough room for five or six passengers to experience the agile handling, powerful acceleration, and flat-out speed of the Lightning.

While the Cigarette 42X can easily break the magical 100 mph barrier during races and poker runs, the boat was built for purposes other than just raw speed. The 42X can be fitted with either two or three smooth-shifting staggered engines and can sprint as fast as 110 mph, but at half its peak speed, the boat acts like a docile cruiser. The three-person bench seat is firm but comfortable, while the hull, which was slightly altered from the 42 Tiger, improves the Cigarette’s handling at higher speeds.

Neill Hernandez, Cigarette’s executive vice president, explains that one of the most significant additions to the 42-footer is its single fuel line. The system reduces the boat’s listing, and it lessens the mechanical complexities, thus simplifying the maintenance. After all, at $822,675 for the top model, the 42X should spend as little time in dry dock as possible.

Although the Nor-Tech 3600 Supercat is the smallest model in the company’s lineup, the 36-foot catamaran was the boatbuilder’s best-selling machine last year. The vessel is equipped with twin Mercury Marine 525 engines on its $350,000 base model. However, owners seeking ultimate power usually fit the 3600 with twin 1,000 hp Nor-Tech engines that enable the Supercat to reach an astounding 145 mph. The increased power comes at a premium, as the base price of the vessel can double, depending on its engine package. But rare is the boat that delivers triple-digit quickness, a smooth ride thanks to its two-hull design, and a brash and unique exterior graphics package.