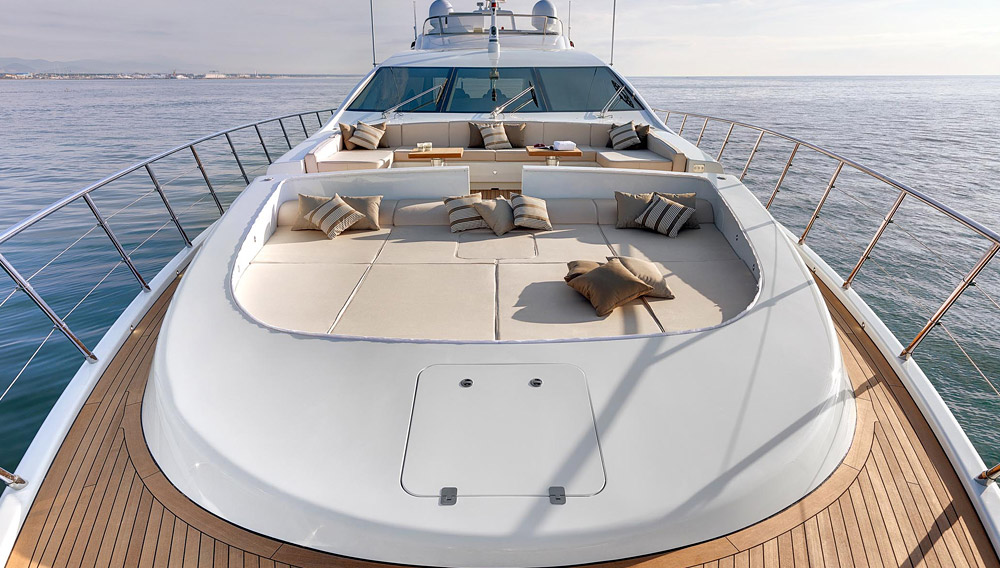 The atmosphere at mid-February’s Miami International Boat Show, which displayed more than 3,000 boats, was the most positive it has been in years. Despite Valentine’s Day storms that canceled thousands of flights and left many would-be showgoers stuck in the Midwest and Northeast, visitors from the rest of the United States, Latin America, and Europe flew in to investigate dozens of new models and walk the docks. For the first time since before the onset of the global recession, boatbuilders and yacht brokers seemed genuinely happy with foot traffic and sales. With the United States now seen as the mecca for yacht sales, European builders attended the show in full force. Italy’s Ferretti Group, which launched the Ferretti 750, had the largest display in the show’s history, with 22 yachts in the water. Other Italian and British shipyards held worldwide premieres of models that would historically have been launched at the major boat shows in Cannes, Monaco, or Düsseldorf. A number of U.S. builders also debuted prominent vessels, as did shipyards from around the globe, further solidifying the Miami International Boat Show’s position among the world’s top yachting events. (www.miamiboatshow.com)

Wider Yachts—the young Italian shipyard that, in 2011, wowed the yachting world with the launch of its futuristic Wider 42, a speedboat with side wings that fold out—announced a new 165-foot superyacht at the Miami show. Tilli Antonelli, Wider’s founder, said the new yacht is designed to hold a personal submarine in a side compartment, while the aft tender garage’s design will allow the new Wider 32 tender to drive right into the hull for storage. The Wider 32 can be configured in many paint schemes, including camouflage, to reflect the owner’s taste. “It lets the owners express their creativity,” said Antonelli at the South Beach cocktail party announcing the new boats. (www.wider-yachts.com)

Overmarine, maker of the Mangusta series, held the worldwide premiere of its new Mangusta 110 semicustom model. The Italian yard is known for its go-fast open yachts. The 110-foot yacht, which can reach a top speed of 33 knots, maintains Mangusta’s traditional racy profile while featuring a bright and minimalist interior that is defined by walnut joinery and white decor. Other highlights include a sunroof and a spacious sundeck. (www.overmarine.com)

The Princess S72 was another worldwide premiere, the first of the U.K. builder’s sport-bridge series. Combining a long, sporty profile with a small flybridge, the S72 retains plenty of room for its airy, open salon, with design cues that blend wood, leather, and metals. The boat’s sporty profile and 37-knot top end are fresh departures for Princess, which tends to be conservative in the design department. (www.princessyachtsamerica.com)

With its 56STY, which debuted in Miami, Absolute Yachts has designed a beautiful sport yacht with a retractable hard top that opens the salon to the elements. Below deck, three large staterooms sleeps up to six people, with an aft crew cabin that can also serve as additional cabin for guests. Of the three Volvo IPS engine configurations available on the 56-footer, the largest uses twin IPS 800s, which deliver a top speed of 37 knots, while the joystick-controlled pod system allows easy maneuvering at docks. Absolute is a brand to keep an eye on: The Italian yard has launched 13 new models in the last three years. (www.absoluteyachts.com)

The U.S.-built Sea Ray L650 Fly has narrowed the design gap with its European competitors. The 65-foot, four-stateroom flybridge boat is the first of Sea Ray’s L series. The open salon features large windows, well-crafted walnut cabinetry, and rift-cut hickory floors, among other elegant design elements. The bow area offers a curved lounge and sun pads and the flybridge is equipped with a sunroof that can be opened manually. (www.searay.com/l-class)

Chris-Craft, the perennial U.S. brand, debuted its Launch 36, which can serve as a large day boat or a megayacht tender. The sleek, teak-covered 36-footer has Chris-Craft’s traditional soft lines, with an open cockpit that breaks into two social areas fore and aft. The two-stateroom cabin can sleep up to five, and the large head has a separate shower stall. The newest Chris was a classic centerpiece at the indoor show in the Miami Beach Convention Center. (www.chriscraft.com)

Back Cove Yachts, a builder of Downeast-style weekenders, launched its largest model in Miami. The Back Cove 41 has the simple, straight profile and high prow you expect from a Maine builder of classic boats, along with impeccable fit and finish. The cockpit is clutter-free and uncomplicated, with two lounges a full galley, and the helm station. Two staterooms can be found belowdecks. (www.backcoveyachts.com)

The Italian builder Azimut Yachts, which launched its 84 Flybridge in Italy in 2012, introduced an “Americanized” version at Miami. Unlike most U.S.-bound boats, which typically include merely a converted 120-volt electrical system, for this model Azimut worked closely with its U.S. dealer, MarineMax, to design an entirely new version, which is barely recognizable compared to the European version. Differing elements include new stairwells and hull windows, a new lower-deck layout that features a master stateroom with its own entrance, and upgraded stonework and marble, plus dozens of other fine touches. (www.azimutyachts.com)

The new Maiora 23 provides the template for the future fleet of this brand from Italy’s Fipa Group. The 77-foot yacht features a gently curved superstructure, an unusual mini hard top on the aft part of the flybridge, and a teak-clad salon. The four-stateroom interior includes a full-beam master suite amidships. The all-weather 23 is a durable vessel that will perform in rough coastal waters from New England to Florida. (www.maiora.it)