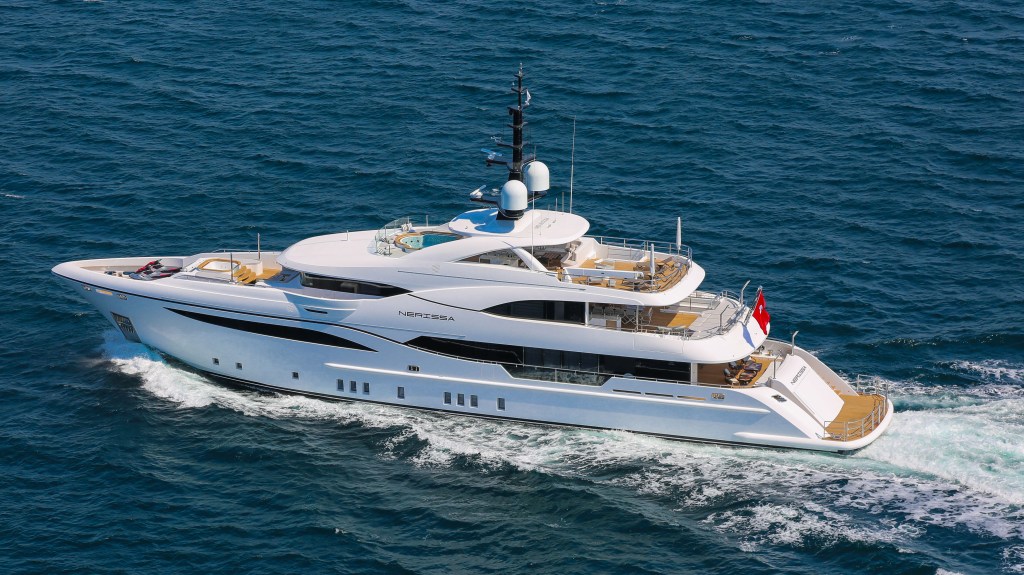 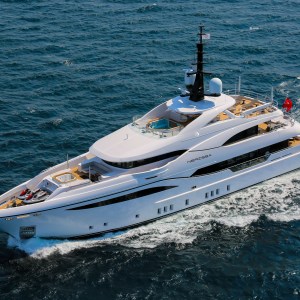 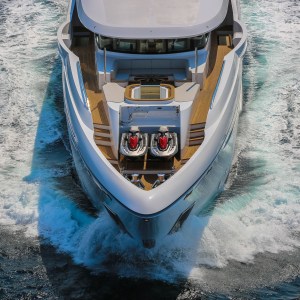 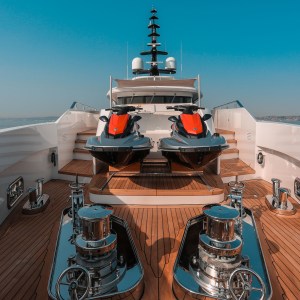 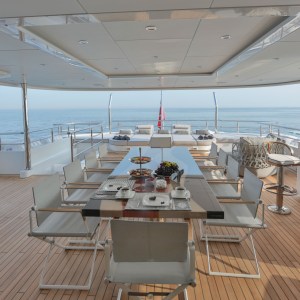 From the dock at Monaco’s Port Hercules, there was nothing earth-shattering about Bilgin Yachts’ Nerissa. The new 156-footer was a good-looking yacht, with a handsome profile defined by curves on the superstructure and flybridge that bore a nice contrast to the straighter edges of the hull and forefoot. The contemporary exterior by Unique Yacht Design was clean, with no rough edges. Lead designer Emrecan Özgün did a commendable job with details like the shapes of the side windows, two Jacuzzis (one on the foredeck and another on the skydeck), and a large beach club at the stern with a day head and shower. Unique Yacht Design also did Nerissa’s naval architecture. The yacht has a top speed of 16 knots with twin 1,475 hp MTU engines, and transatlantic range of 4,000 miles at a friendly cruise speed of 10 knots. From the outside, it was clearly a well-designed yacht.

Once inside, however, Nerissa became a completely different animal. London-based H2 Yacht Design was tasked with creating an interior that the superyacht world had never seen before. H2 designer Toby Sturge used copper as the baseline material in many forms, often turning the metal into fine art across the interior. “The use of the copper and stainless steel become a great combination, and included a light and dark veneer that gave a contrast throughout the interior,” says Sturge.

The shipyard used burnished copper and steel patterns that resembled metallic planks or metal-painted wooden pieces across many of the walls and doors. The effect was subtle, artistic, and electric, without ever being overbearing. The dark and light copper patterns created a vibrancy that matched well with the traditional wood walls and marble. They provided a nice counterbalance to the copper planks.

The heart of Nerissa, however, was a spiral staircase that proceeded from the lower deck to the skydeck. A skylight designed into the transparent bottom of the skydeck Jacuzzi bathed the open staircase with natural light, while small white lights dangled like crystals down the center of the staircase. For a yacht this size, the staircase is truly impressive.

The master suite forward also seemed like it should be on a larger yacht. It had a skylight as well as a fold-down balcony that expanded the space. Beyond the large bedroom, there was also a walk-in closet, a large en-suite bathroom, and a small office nook. The senses of light and space were true differentiators between Nerissa and other master staterooms in the same size category.

Bilgin Yachts built Nerissa as a spec boat, but the yard didn’t hold back when it came to the interior design, while also showing what it could do in-house with a mastery of metals and other complex materials. The result is one very special yacht that will eventually find an owner who appreciates its interior artistry.