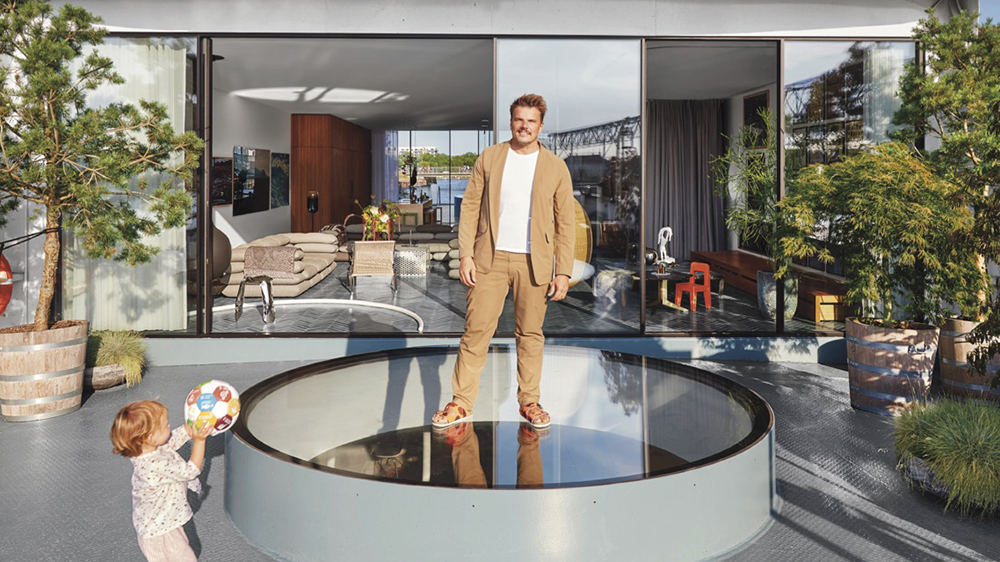 Architecture’s Mr. Big has quite literally made a splash with his latest design. Bjarke Ingels, the famed Danish starchitect who continues to shake-up the world through his eponymous firm BIG, has turned a decommissioned ferryboat into a luxurious family home.

The 46-year-old snapped up the 126-footer, Bukken-Bruse or “billy goat gruff,” back in late 2016. It was moored then, as it is now, near Refshaleøen in Copenhagen’s historic harbor and Ingels promptly fell hook, line and sinker for the vessel’s postcard views.

So began a colossal renovation process to turn a tired 450-ton ship into the flashy new SS Ingels, a vessel which would eventually house Ingels, his wife, architect Rut Otero, and their nearly two-year-old son, Darwin. The Dane wanted to retain as many nautical quirks as possible—that includes porthole windows and steering wheels—while introducing streamlined curves and a sense of symmetry.

“It is a boat, so it wants to be symmetrical,” Ingels told Architectural Digest. “Part of the project was restoring that symmetry along both axes.”

As expected, the generous interior is replete with furnishings designed by Ingels and other notable names, along with souvenirs garnered from the couple’s many global adventures. The layout is split across two levels. The upper level sees a sizeable living area with second-to-none vistas, a suspended fireplace and statement sofas by Kibisi (a brand Ingels co-founded). On the other side, there’s an open kitchen outfitted by Italian architect Luca Cipelletti and lit by Ingels’s own pendant lights. SS Ingels is crowned by an idyllic rooftop terrace with 360-degree views one can drink in with a Carlsberg, or two.

The lower level, meanwhile, sports a futuristic playroom punctuated by technicolor beanbags and bright carpets. Here, the two architects can spend quality time with their thigh-high cabinmate. Elsewhere, Ingels designed two cabins for the seafarers and an epic bathroom that was inspired by a recent jaunt to Japan’s ryokans. The sanctuary features a soothing hinoki cypress soaking tub, along with a sink and shower.

Ingels has long been a proponent of floating structures. In 2016, he unveiled Urban Rigger, a cluster of above-water shipping containers created to alleviate Copenhagen’s student-housing shortage. Then, in 2019, BIG debuted the Oceanix City concept that would see 10,000 people living on modular hexagonal islands.

“It is the most resilient architecture,” he adds. “As sea levels rise, so will houseboats.”