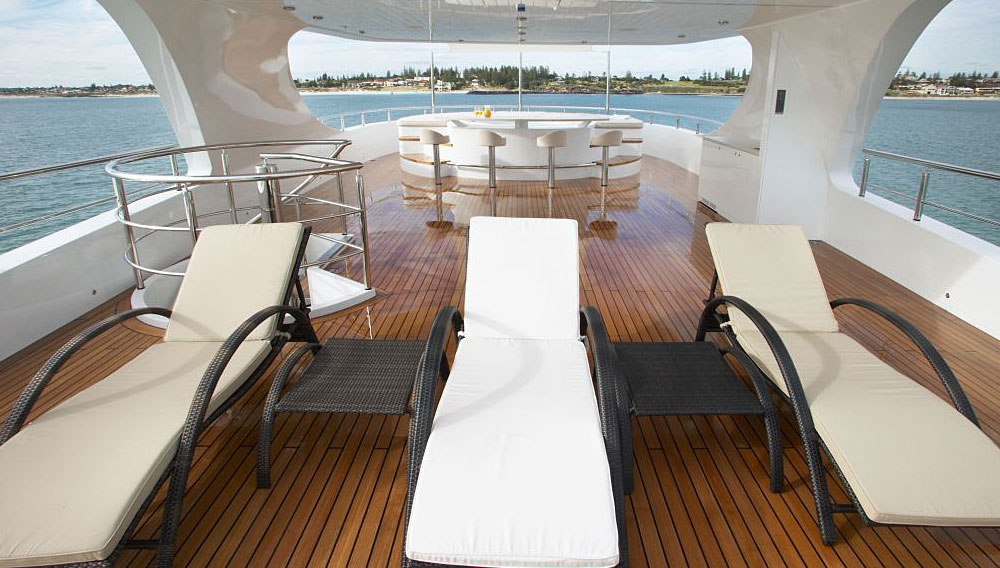 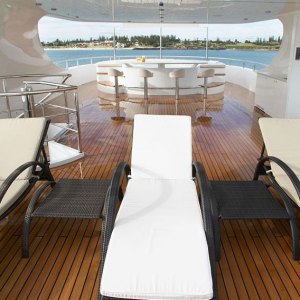 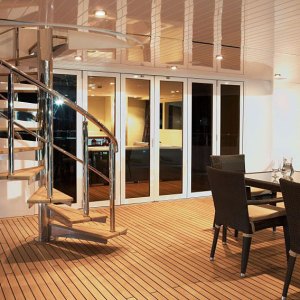 Oceanfast has been building motoryachts for 25 years, and its new 48-meter series yacht is a fresh departure for the Australian shipyard. Launched in June, the 131-foot yacht was designed for reduced operating costs while also making the best use of space, both on the outer decks and interior.

Its beam of 30 feet, typically found on motoryachts 20 or 30 feet longer, allowed Oceanfast’s designers to create a cavernous interior, particularly in the salon, which features a full-beam layout with banks of windows that provide the ultimate waterfront view. The master suite is also a full-beam stateroom, with a minimalist, contemporary design. Designers used a very light touch, employing off-white materials, patterned fabrics, and modern carpets, with judicious use of dark wood paneling, to coordinate the interior.

The exterior, three decks and a bow area covered by teak, is designed for those who want to take full advantage of the outdoors. The sun deck has a Jacuzzi and wet bar, along with immense sun pads, while the deck below was designed for entertaining, including alfresco dining or cocktail parties. The deck connects to a lounge with bi-fold doors that open out, creating even more space. There is yet another deck below that level that connects to the salon.

But the Oceanfast is more than just another floating condo. It has a range of 4,000 nautical miles at 12 knots and reaches a top end of 16 knots. Parent company Austal Limited is one of the largest builders of aluminum vessels in the world, including many warships, so Oceanfast has a well-deserved reputation for oceangoing vessels. It has two of the most impeccable credentials for any blue-water yacht: an MCA LY2 classification and Lloyds Yacht Registration. (011.61.08.9494.9999, www.oceanfast.com.au)