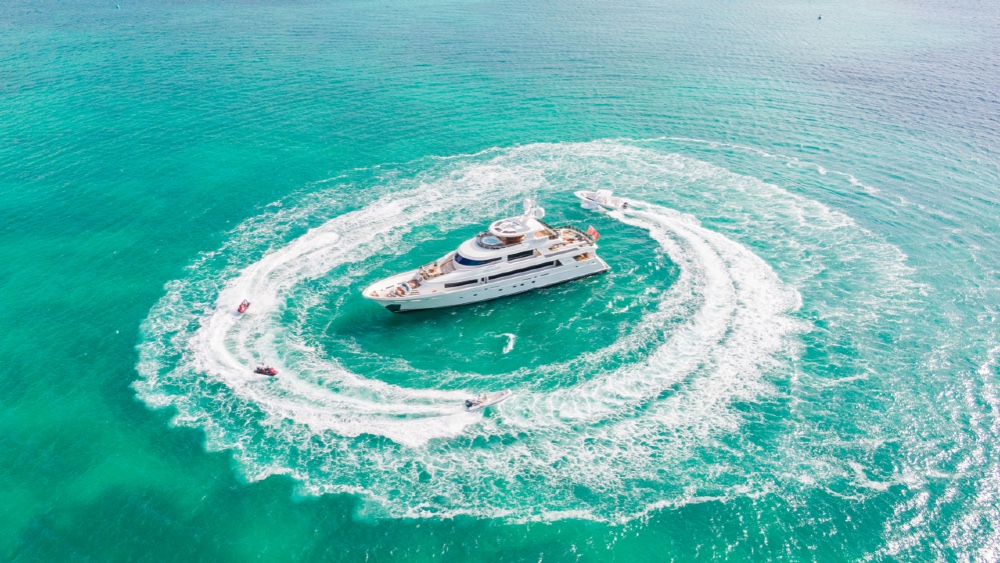 With schools closing over the next few weeks, many parents face the challenge of another three months of being homebound with their kids. Summer camps have been canceled, flying commercially is still iffy, and that annual trip to the beach or mountains might be postponed until next summer.

A growing number of families are finding that boats make the best Covid-19 release valves, since they simultaneously offer an escape to sea, a protective bubble and, in most cases, unscripted enjoyment. You don’t have to own a boat to enjoy the water. In fact, more people are deciding not to buy their own boats.

Alternatives to traditional ownership have become more common over the last few years, with diverse business models catering to different demographics. The boat club has been the least expensive way to access a boat or yacht, with many benefits that come with ownership. Club options range from offering small center consoles for a few hours to landing on a deserted beach from a gentleman’s runabout, to fractional ownership of a superyacht for week-long escapes from civilization.

Boat clubs offer healthy isolation at a fraction of the cost of ownership. Plus, you don’t have to clean the boat when you’re done.  Freedom Boat Club

“We’ve sold an unbelievable number of memberships in the last two months,” says John Giglio, president of Freedom Boat Club, the largest boat-club group in the country. “We believe it’s going to be a record-setting summer for many reasons—but mostly because people are looking for something to do.” Giglio said housebound boaters were signing up during the height of Covid-19, when most Freedom locations were closed.

Freedom has 232 clubs across the country, with more than 40,000 members. Giglio says the number is growing by 10 percent each year. Boat sizes range from 16-foot bowlders for a couple to 28-foot cruisers for 12 passengers.

After several months of Covid-19 restrictions, Giglio says most of the clubs will open June 1. “In some of the markets, we’re limiting members to one boat trip per day, either the morning or afternoon session,” he says. “In July, we’ll be heading back to normal hours.”

While boats offer one of the best ways to self-isolate, nobody is pretending that Covid-19 risks are not present. The boat clubs are minimizing any possible exposure with new cleaning protocols and enforced social distancing. Part of the reason for limiting boat time is Freedom’s new hygiene policy, says Giglio, which means using products on the CDC’s approved list as well as hiring more staff to clean the boats.

“Workers have to wear masks and we recommend our members wear masks, too, at least on the docks,” says Giglio. “One of the drawbacks of this situation is that we tend to dote on our members and grab their stuff and load it on the boats for them. Now, we have to take a more hands-off approach.”

Barton & Gray Mariners Club, with its fleet of 45 Hinckley yachts from Maine to Key Largo, Florida, has also seen an uptick in membership over the last few months.

Barton & Gray’s upscale take on the boat club includes a fleet of Hinckleys, a captain and the ability to access isolated beaches.  Barton & Gray

“We’re fortunate that we’re a private club, so if you want to use one of our boats, it tends to be a secluded experience,” Wil Lockman, vice president of operations, told Robb Report. “Our concept of boating is also about high-end experiences.”

Rather than offshore running, the Hinckleys, which all have professional captains, are designed more for a day of leisurely cruising or a picnic on a deserted beach. Barton & Gray puts provisions and snacks on all the yachts, and full catering is also a possibility. Many members use the Hinckleys in their local waters—heading to Block Island from Greenwich, Conn., gunkholing in the Chesapeake or snorkeling in the turquoise waters around Key Largo.

The Hinckleys are often used like chauffeured limousines. “The majority of members arrange for the captain and boat to meet them at a waterside restaurant or yacht club, rather than them going to our facilities,” says Lockman. “Our members expect that top level of service.”

Ocean oasis: Superyachts offer the advantage of being able to travel for days without having to stop in port.  AvYachts

Barton & Gray has different membership levels, starting with its Ensign card, which has an initiation fee of $15,000 and annual dues of $29,500 through the Admiral ($15,000 initiation and $59,500 annual fee), which provides more access and benefits.

The Hinckley fleet ranges in size from the 36-foot Picnic Boats to Talaria 48 cruisers. On Nantucket, two vintage Boston Whaler Eastport 17s—Scallop and Oyster—are there for the owners to drive. Captains and maintenance staff are screened for health, says Lockman, while the boats themselves are now receiving more extensive cleaning under CDC guidelines.

Catering and overnight stays are possibilities with some of the higher-end boat clubs.  Barton & Gray

Barring full ownership, the highest level of access is fractional ownership. In the aviation world, that means buying a quarter share in a business jet. Ft. Lauderdale-based AvYachts has two Westports, a 112-footer and 131-footer, that are now being owned in a similar fashion.

This kind of program is different than the annual memberships, partly because of the scale of the investment (the share purchase for the Westport 112 is about $2.49 million and quarterly fees to cover operating costs are $70,750) and partly because of different usage types. Instead of weekly or even daily access to a vessel like Freedom or Barton & Gray, the AvYacht model allows each owner six weeks on the yachts. The company also oversees full management of the yacht, from hiring crew to doing ongoing maintenance. It will also charter the yacht for the owners to help offset operating costs.

While the fractional model includes quarterly payments for operational expenses, AvYachts says the end cost is 75 percent less than full ownership over a five-year period, at which point the yacht is sold and the proceeds are divided among the owners. “The model gives the experience of yachting by removing many barriers to entry,” says Kathy Kennedy, chief operating officer. “For the same price as a smaller yacht, you can travel with your family and friends to destinations that are pristine, and haven’t been overrun by crowds.”

Enquiries have increased over the last few months. “We’re seeing some people looking at this for the first time,” says Kennedy. “It’s possible they’re changing their priorities in life, saying maybe it’s time to do yachting.”

AvYachts offers daily or weekly charters on its yachts for potential owners to experience the lifestyle, with the charter fees applied to the purchase price if they become partial owners. “We’re a firmer believer in baby steps for people who are new to yachting,” says Kennedy.

The company has also become a firm believer in sanitization. “We now have a two-page sheet that crew need to follow when the boats are cleaned,” says Kennedy. “We also closely monitor the health of our crew.” AvYachts has hired an outside contractor specializing in cleaning yachts. “It’s expensive and an extra layer, but we want our owners to feel comfortable when they’re using their yachts,” she says.