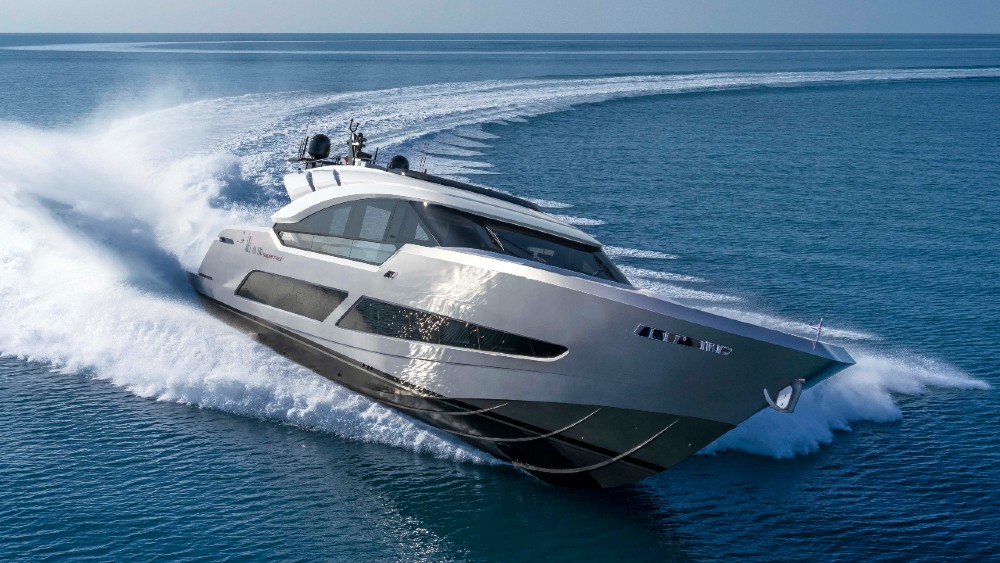 Breathe the word “Superfast” in the company of any red-blooded car aficionado, and it’s guaranteed to conjure-up images of Ferrari’s classic 500 Superfast from the ‘60s and, more recently, the thundering V-12-engined 812 Superfast.

So, if you’re Italy’s AB Yachts and you’re looking to name your fastest, most thrilling yacht ever—the 68-mph, 7,800-horsepower, AB 100—you could do worse than christen it “Superfast.”

The Viareggio-based yard—part of the NEXT Yacht Group—created this first AB 100 Superfast for a European client who, according to AB Yachts’ head of sales Giacomo Benelli, had an all-consuming passion for going fast. Very fast. So instead of the typical three 1,990-hp MAN diesels that come with the regular AB 100, he opted for a trio of 2,600-hp MTUs. The result; a pedal-to-the-metal top speed of 59 knots, or 68 mph, and a still-speedy 58-mph cruising speed.

The 100 has a cool swim platform with a section that lifts to launch and retrieve the tender.  Courtesy AB Yachts

And as with the “standard” AB 100, the Superfast delivers all that thrust through triple water jets from Sweden’s Marine Jet Power.  A single joystick controls the jets, which are configured with steerable outer units and a fixed, central thruster.

One impressive claim from AB is that at a cruising speed of around 50 knots, the Superfast’s fuel burn is slightly less than it is at 25 knots. According to Benelli, it’s all down to the design of the 100’s slippery, semi-displacement hull, and the efficiency of the MJP waterjets and MTUs.

“We’ve been building fast yachts since 1992, and for those 30 years, the only type of propulsion we’ve used is the water jet,” says Benelli. “The Superfast also draws just over four feet, which is perfect for the shallow waters of the Bahamas.”

The interior has a contemporary open design, with large windows.  Courtesy AB Yachts

They also offer real benefits in handling. Like some oversized jet-ski, the Superfast can turn on a dime and—amazingly—stop virtually in its own length, almost from top speed, by reversing the thrust.

The hull itself is constructed from vacuum-bagged GRP with carbon fiber reinforcement in key areas, and adhesives developed for the aerospace industry.

While the Superfast is based closely on the design of the original AB 100, its development coincided with a major redesign of the series. The key changes included the addition of oversize, almost full-length hull windows and sole-to-ceiling salon windows.

AB’s in-house engineers and designers also came-up with a clever design for the swim platform and beach club.

Mounted on a four-link, pantograph-style hydraulic mechanism, the oversize center section of the swim platform can cantilever upwards, revealing a tender and toy garage. With the platform in its raised position, it also makes one awesome diving board.

The new hull layout also focuses on providing plenty of sunning and lounging areas. From the oversized rear cockpit, with its almost full-width sofa and sun pad, to the huge forward deck with its vast cushions and U-shaped sofa and table, it’s a sun lover’s dream.

The space-age helm is much in keeping with the boat’s speed.  Courtesy AB Yachts

There are also tanning beds up on the top deck flybridge. But lowish stanchion rails might make it precarious for kids, and the lack of shade would be a problem in the mid-day sun.

One major focus with this new Superfast is its emphasis on open indoor/outdoor living. Huge glass doors between the salon and back deck, fold away completely to connect the two areas. And, at the request of the owner, the usual partition between the salon and the helm was removed to open up the entire living and dining space.

“Everything is on one level, so there’s an easy flow throughout the boat,” says Benelli.

An unusual lounge on the swim platform.  Courtesy AB Yachts

Below decks, the owner went for a four-cabin layout with beds for 10, including a 22-foot-wide, full-beam master stateroom amidships. He also specified a below-deck galley.

Apart from gaining bragging rights, will any owner take the new Superfast to its super-fast 68-mph top speed?

“Probably not all the time. But hitting almost 60 knots feels like you’re in a Formula 1 car. A Ferrari, obviously,” adds Benelli. “It is a lot of fun.”

But it also gets you places fast. “Portofino to St. Tropez takes less than a couple of hours. Miami to Cat Cay, Bahamas takes 45 minutes,” says Benelli. “There’s a reason we call it Superfast.”