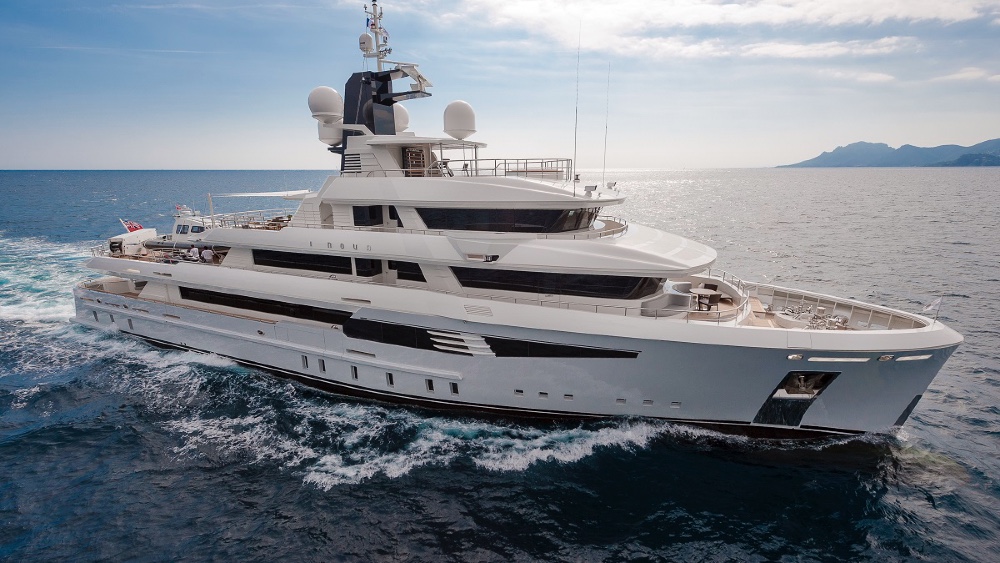 To paraphrase the late Ella Fitzgerald, “It isn’t where you’ve been; it’s where you’re going that counts.” And when it comes to I-Nova, the 165-foot explorer yacht built for “uncompromising adventure,” that place is anywhere in the world. Now, it needs to find that place—or many places.

Built in 2013, the first of the Cosmo Explorer series was an owner’s labor of love who planned to see the remote corners of the world. Unfortunately, that never happened. Now up for sale, the yacht is searching for an owner who will make most use of her expedition hull.

I-Nova‘s build team had a stellar international cast: A “Made in Italy” interior and exterior by Italian designer Cristiano Gatto. A Dutch collaboration between Vripack and Van Oossanen for the go-anywhere hull. The owner, planning to do an expedition series called the Cosmo Explorer, had the yacht built at Greek shipyard Megatechnica. Experts in the construction of commercial vessels, Megatechnica cut no corners during the five-year build process.

“The owner wanted to show what you could do outside of the Northern European shipyards,” Alex Banning, director at SuperYachtsMonaco, told Robb Report. “It was a project of his own doing, using best-in-class suppliers and builders.”

I-Nova showed her expedition-yacht pedigree on a trip to Greenland.  SuperYachtsMonaco

The result is an ice-class vessel equipped with some serious go-anywhere capabilities. Her vertical bow is hydrodynamically optimized to make her an efficient and long-range cruiser. The hull is reinforced with extra-thick steel plates specifically for polar expeditions. The propeller, sea chest, rudder, steering gear and seawater cooling systems meet ABS DO ice class requirements. And at 165 feet in length, though arguably compact for an explorer, her huge interior volume and shallow draft give her great versatility.

“When the first ideas and concepts emerged in 2009, I-Nova was right on the leading edge of the expedition sector of the market,” says Banning. “The owner wanted to keep it compact and practical, built like a hammer with as much of a silk glove as you can add, with all of those explorer capabilities.”

Included in that concept is what Banning refers to as the “opinion-dividing” rear deck built specifically to store a Fabio Buzzi 34 tender. The semi-enclosed rigid-hulled inflatable is a lasting testament to Buzzi, the owner’s friend, boat builder and racer who died last year in a speedboat crash. The Buzzi tender isn’t included in the sale, but it exemplifies the type of serious vessel that can be accommodated aboard I-Nova, along with a 5-ton crane with a 30-foot outreach, a second tender and a full range of water toys. Only serious explorers would have space for that many tenders and toys.

The “Made in Italy” interior by Cristiano Gatto is modern, light and airy, a nice contrast to the buttoned-down exterior.  SuperYachtsMonaco

“Some people think the Buzzi takes up too much space, but the owner thinks, ‘I’ve built a deck to carry my boat wherever’,” says Banning. “He likes driving it into all the tiny bays and swimming, diving and snorkeling from it. That’s what you can do with a boat deck like that.”

The owner’s original intention was to build an expedition series under the Cosmo Explorer brand. The concept would offer unrestricted cruising on vessels ranging from 148 to 210 feet.

The concept was certainly ahead of its time, though the series never came to be—I-Nova was the first and last of the series. And even she never lived up to her potential as the ultimate explorer. Just after delivery, the family’s situation changed and the owner no longer needed an explorer of I-Nova‘s capabilities. Far-flung destinations came off the bucket list and the family’s preferred cruising grounds of Croatia and Greece became the norm. I-Nova is now waiting for her second lease on life.

The custom design does a wonderful job of combining a luxury superyacht interior and social spaces on the exterior, with the open rear deck and go-anywhere hull.

A beach club and dedicated dive room are located on the lower deck. A large terrace for evening drinks is found on the bridge deck. The observation deck offers panoramic views, as well as a covered exterior gym and spa pool. But the wow factor is reserved for the award-winning interior, which includes an extensive use of 50,000-year-old Kauri wood and a split-level master suite that can be used as an observation lounge, homeschooling room or even a cinema.

“Gatto took the lead on the project alongside the owner, which is why the interior and exterior gel so well, and the interior has a quirky yet hugely flexible layout,” says Banning.

The yacht is for sale through SuperYachtsMonaco for $23.5 million. Check out its smart design below.