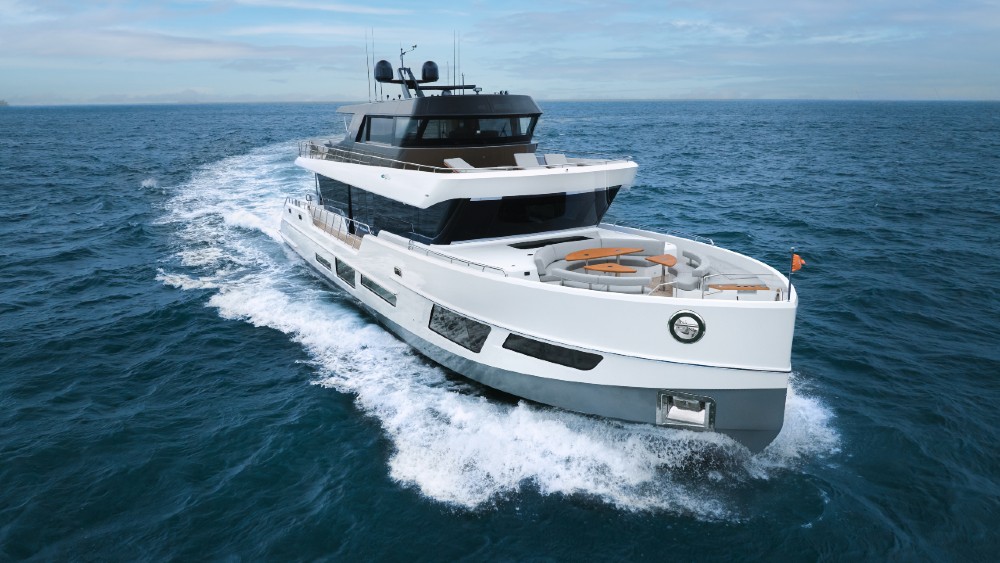 Not bad for a designer who has never designed a luxury yacht before. Meet Jozeph Forakis, who penned the polarizing, tugboat-inspired looks for CL Yachts’ brand-new CLX96 explorer, arguably Boat of the Show at this week’s Fort Lauderdale International Boat Show.

Before joining CL in early 2017, the Milan-based, native New Yorker specialized in industrial design, working with the likes of Swatch, creating its landmark Irony line of metal watches. A stint as European design chief for Motorola saw him come up with the now-iconic, swivel-screen V70 flip phone.

“CL was looking for a clean-sheet approach for designing a new flagship. Part of that involved taking the risky decision of going outside the industry to find it,” Forakis tells Robb Report during a guided tour of his new yacht at FLIBS.

Love it or hate it, it definitely has presence. With that commercial-grade plumb bow, workboat-like reverse-angle deckhouse, matching pilothouse-cum-skylounge perched on the top, and stealthy gray-and-white paint, it looks all set to head to the Southern Ocean.

“Cheoy Lee Shipyards is one of the top tugboat builders in the world. And the more I researched that raked, reverse-angle window design, the more impressed I became about its functionality,” says Forakis.

The design is all the better for expelling spray in heavy weather, for increasing protection from the sun—which, in turn, reduces the load on air conditioners—and increasing interior volume. It also gives the yacht a no-nonsense, bad-ass look.

The design also incorporates vast amounts of outdoor space in the layout.

Take the circular bow seating area the designer ever-so-pretentiously calls the Piazza del Sol.  There’s seating for up to 10 “in the round,” with descending backrests to expand the size of the sunpads on each side.

Up on the pilothouse/skylounge level, he’s taken that age-old fishing boat feature of the narrow Portuguese Bridge walkway, and expanded it significantly to provide space for a quartet of lounge chairs. Forakis calls it the Terrazzo Portoghese.

Sashay aft, along wide teak side decks to the beach club at the stern, and the area looks big enough to land a Robinson R22 chopper. Need more lounging space? Press a button to deploy the 1,700-pound-capacity Z-lift transformer and you get a stairway to the ocean—and a perfect launch platform for a tender or fleet of water toys.

But all thoughts of gritty workboat design evaporate when you enter the main salon. The view from the back doors to the forward windows is uninterrupted by bulkheads.

“We wanted this feeling of the interior being completely open, with everything on one level. Which is the reason for putting the helm station in the pilothouse above, and creating an open-plan galley,” says Forakis.

Part of this open look is down to the series of super-stiff, super-thin carbon fiber “ring frames” in the main salon that provide I-Beam-like structural stiffness.

These also allow huge, thin-framed, floor-to-ceiling windows and a three-panel folding glass door on the starboard side. They also provide a solution to Forakis’ pet hate of exposed air-conditioning vents: The frames incorporate out-of-sight outlets.

Moving the helm upstairs also creates one of the designer’s favorite features; his so-called Champagne Lounge. This elevated semi-circular seating area, right beneath that reverse-angle window, features cushy sofas and a table with an integrated wine cooler.

“It ensures there’s always one bottle of Champagne chilled and ready to pour,” he says.

Below decks are four cabins for eight guests, including a full-beam forward master suite and large VIP suite. Forakis’ focus on bringing the outside in, includes giving the master a set of expansive hull windows, an oversized glass skylight above the bed, and a 65-inch TV that can display a live feed from a camera mounted on the bow.

Powering the $10.8 million CLX96 is a pair of beefy Caterpillar C32s ACERT diesels packing 1,900hp apiece. As a testament to the slippery running surfaces created by naval architect Earl Alfaro, the fiberglass yacht can hit a surprisingly swift top speed of 29mph and cruise serenely at 25.