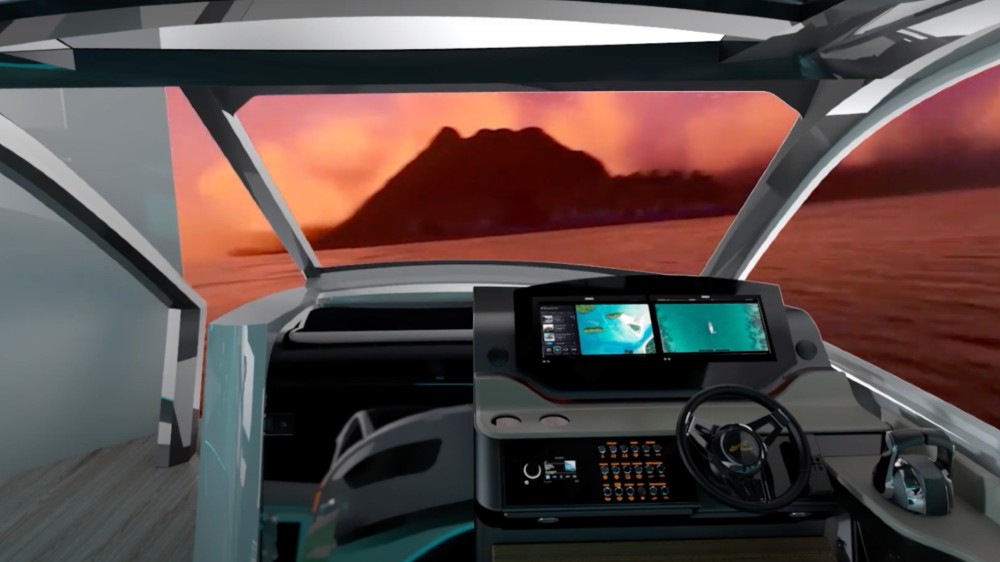 Want a taste of boating’s future—autonomous docking, electric race boats and advanced connectivity? Brunswick Corp. was set to have a comprehensive display during this week’s Consumer Electronics Show with all those components, but decided to go virtual due to Covid concerns. Still, it provided a taste of the new technologies that boaters can expect.

The Chicago-area firm, which is the world’s largest pleasure boat and engine manufacturer, is now doing its best to be recognized as the leading tech player in the marine industry by moving forward on multiple fronts to keep boating apace with the automotive and aviation fields.

Brunswick has been flexing its tech muscles for several years. Among this year’s CES honorees for smart gadgets, phones and other emerging technologies, the Mercury 600 Verado V12, the world’s largest outboard launched by Brunswick’s engine division last year, won a 2022 CES Innovation Award last month for its advanced features. In 2020, Brunswick won a CES award for its First Mate safety and security system.

The E1 electric race boat has an outboard developed by Mercury Marine that could serve as a prototype for future marine engines.  Courtesy E1 Racing

The 177-year-old manufacturing firm’s culture is unrecognizable from just five years ago. “We’re increasingly a technology-orientated company,” says Foulkes. “The goal is to put marine technology on the same stage as other vertical industries. We want Brunswick to be positioned on the leading edge.”

The company has a few major competitors, including Groupe Beneteau in the boatbuilding sector and Yamaha Marine for outboards, but nobody is as aggressive when it comes to connecting new technologies to multiple platforms. It recently acquired marine electronics giant Navico for $1.05 billion, and earlier bought a lithium-battery supplier as well as Power Products Group, which advanced its connectivity and electrification strategies.

Electric boats have been around the industry for over a decade, but in the last year they have been expanding beyond small craft to putter around the marina and now include fast runabouts with foils, wake-surfing boats and even a battery-powered tender designed for coastal cruising. Brunswick’s Mercury division developed an electric outboard, rated at 65 kW, for the new E1 electric boat racing series. The sleek boat, called RaceBird (shown above), will run at about 58 mph.

“It’s a decent speed with a good range, and gives us a way to gain experience in a relatively controlled environment,” says Foulkes. Many of Mercury’s past racing engines have gone on to become mainstream inboards and outboards. Foulkes said that Mercury will launch five electric engines by 2023, with the first coming out this year. Its boatbuilding brands will launch four electric boats in the next two years.

The marine world won’t be jumping head-first into electric boats. The battery power necessary to push a boat through water—much thicker than air—will limit engine sizes to lower-horsepower ranges. Production volumes also tend to be much greater in the lower-horsepower range. Expect high-horsepower engines to keep running on gas. But the RaceBird should prove its worth for R&D, as well as global visibility for Mercury outside the marine world.

The other futuristic area Brunswick is exploring is autonomous boating. One of its boat brands, Boston Whaler, debuted its Docksense system, along with electronics manufacturer Raymarine, last November. It provides 360-degree views of the water, with alerts for hazards, backup cameras, increasing situational awareness for the boat’s operator. The company has also been working with Carnegie Robotics Laboratories on a driver-assisted system that delivers “level-two autonomy” with multiple types of feedback and intervention. “It’s more advanced than the level-zero autonomy currently on the water,” says Foulkes.

Driver-less cruising and autonomous-docking are not going to be features on boats anytime soon, says Foulkes, partly because of AI challenges in recognizing objects in the marine environment (it’s hard for machines to differentiate the line between sky and water in some scenarios), but also making the systems robust and cheap enough for the limited quantities of boat production.

“It’s progressing well but there are edge cases—high wind and waves—that we are working through,” says Foulkes, adding that the company doesn’t want its system to be the only substitute for a boater’s ability to dock manually, in case it goes offline. “Barring these challenges, there are many other ways we can assist boaters with docking.”

Brunswick displayed an automatic docking system in 2020, but it may take five more years before it works as a commercial application.  Courtesy Brunswick Corp.

Perhaps the coolest feature that nobody will see this year was a virtual-reality boat with a real helm that did an immersive cruise.

“We use a program internally called the Unreal Engine for virtual reality to help our engineers manage their ways through virtual environments,” says Foulkes. “Used mostly by gaming engineers, it allowed us to create this fully immersive presentation. It’s really spectacular.”