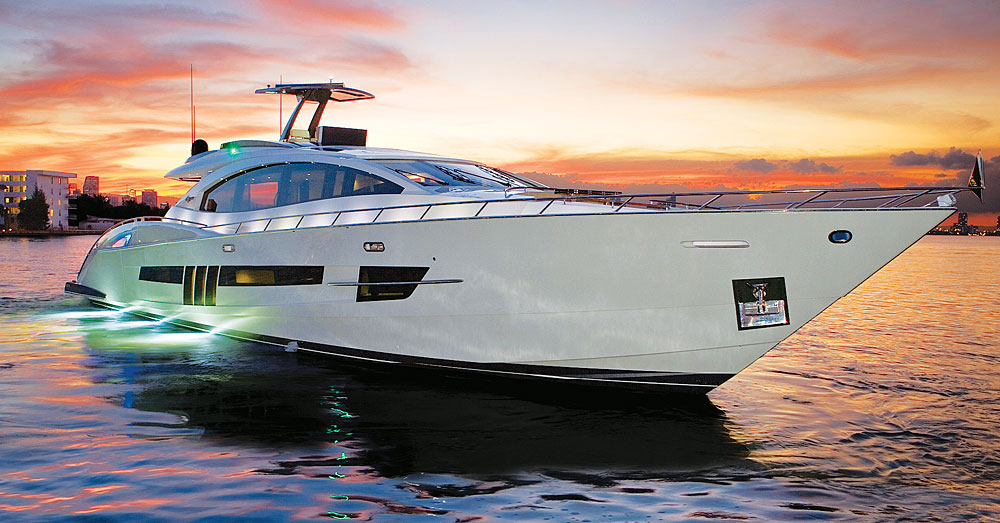 It would be easy to mistake a Lazzara express yacht for a European import. Beyond the Italian name, these boats have the same sleek hull lines, curvilinear superstructures, and aggressive bows as the latest offerings from European manufacturers like Riva, Azimut, and Sunseeker. “When customers hear our boats are designed in Florida, they don’t believe it,” says vice president of sales Rich Lazzara.

But Lazzara Yachts, which now employs the third generation of the Lazzara clan, is arguably one of the most successful American boatbuilding dynasties ever. It began in 1955, when Vince Lazzara, an avid sailor, built his first boat. Several years later, he launched Columbia Yachts. In the early 1970s, just before his sons Brad and Dick joined the company, Vince moved operations to Tampa, Fla., where he built a 130,000-square-foot shipyard on 12 acres and launched the Gulfstar brand. In 1991, shortly after Brad and Dick sold their interest in Gulfstar, they started Lazzara Yachts. “At that point, we decided to focus on contemporary motor yachts,” says Rich Lazzara, Dick’s son. “We saw the opportunity to reinvent ourselves through breakthrough designs.”

Certainly the new LSX 92, which Lazzara Yachts launched at the Fort Lauderdale International Boat Show last fall, offers impressive styling. Like its European competitors, the LSX 92 features a long, lithe hull and a simple black T-top. The teak decks, extended cat’s-eye window in the salon, and sunning area in the bow create a refined look. For an express yacht, the LSX 92 is elegant without glitzy pretense.

Lazzara Yachts has bested its competitors by creating a “waterside terrace” off the master stateroom. Similar patio designs are more commonly found on custom superyachts. “It has never been done on a yacht this size,” Lazzara says. “We pioneered the engineering and materials. It was not an easy feat to put an 8-foot-by-8-foot hole in the side of the hull and maintain the structural integrity.”

Engineers at Lazzara Yachts’ Tampa yard have become masters of using exotic materials often utilized in aeronautics. Because the LSX 92 is an express yacht, it must be lightweight and able to reach speeds above 30 knots. “We used the lightest materials everywhere on the boat, from a balsa-core material in the hull to a stone mounted to a quarter-inch aluminum substrate for the kitchen and bathroom counters,” Lazzara says. “The cost is significantly more, but the weight is a fraction of the solid stone.”

To keep the interior cool, engineers used thermally insulated glass that reduces heat load from the sun by 35 percent. They also designed unbroken space to give the boat a wide-open feel. “On most express yachts, the main deck is a series of dimly lit, cramped rooms,” Lazzara says. “We wanted to create an atriumlike space with lots of ambient light from large windows.”

The LSX 92’s most notable component is its propulsion system featuring four Volvo IPS II “pod” drives. These drives, which are more efficient and compact than traditional diesels, have been used on smaller boats—but rarely, if ever, on a yacht. The design was a gamble that other yacht manufacturers have been unwilling to take. “But we thought the risk was worth it,” Lazzara says. “They are 35 to 40 percent more efficient than traditional engine configurations, and there is absolutely no diesel smell. Best of all, they require 9 feet less space in the engine room, which frees up more prime real estate for the master stateroom.”

The Volvo IPS II system includes a joystick for virtually effortless piloting. “We use features like these to set ourselves apart,” Lazzara says. “It’s truly a global market now, and buyers who can afford an $8.1 million yacht like the 92 have the wherewithal to look in different markets. We’re developing a boat that appeals to the world.”