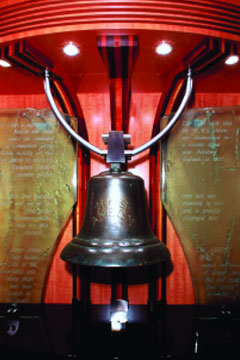 As with any megayacht, there is a story behind the name of Anson Bell, a 156-footer built by Palmer Johnson. More compelling, however, is the tale of the bell itself.

One day in 1999, during the construction stage of his then-nameless yacht, Stanley Hubbard was flipping through a Christie’s catalog when he spotted an 18-inch-tall bronze bell. Hubbard learned the item had been rescued from the HMS Anson, an English warship that was lost in 1807. “I thought, ‘Wouldn’t it be great to have that on board?’ Hubbard says, recalling his decision to enter the auction’s highest bid for the bell. “My wife and family thought it would be fun, too, so we decided to name the boat after it.”

Anson Bell, which was completed last summer, is for sale, bell and all, for $29.5 million through Chas. P. Irwin Yacht Brokerage. Its centerpiece sits in the yacht’s main entryway behind glass panels. Etched into the glass is the history of the bell, which sank with the HMS Anson, once the pride of His Majesty’s fleet, off the coast of Cornwall.

The 160-foot, 64-gun HMS Anson became a legend soon after its launch, when, in the Battle of the Saintes in 1782, it tangled with the American colonists’ French allies and cut down one enemy warship after another. The Anson’s reputation grew over the next decade as the warship dispatched Spanish frigates and captured privateers. In one 1806 battle off the coast of Cuba, the warship scattered 12 Spanish gunboats and destroyed a coastal fortress.

During this period, the Anson’s bell was the heartbeat of the ship, keeping its time and determining the activity of its crew. “It was essential to the smooth running of the ship,” says Michael Phillips, a British naval historian who has written extensively about warships of the Anson’s era. “The routine of the Anson was based on the watch changing every four hours throughout the day, and the bell would ring every half hour to mark the time. If the Anson was carrying its full complement, there could be up to 650 sailors on board. That would make for extremely crowded conditions, so any mass movements would have to be carefully coordinated.” According to Phillips, the ringing of the bell, which was located on the Anson’s forecastle, also informed the sailors when to stow their hammocks and bring up provisions.

However, the bell went silent several days after Christmas in 1807. The HMS Anson was sailing to France to participate in a blockade of the French fleet, until fearsome weather convinced Capt. Charles Lydiard to turn the boat back toward England. On December 28, the Anson ran aground only 100 yards from shore. Some 270 sailors made it to shore, using the Anson’s masts as bridges to the beach, but as local villagers watched in horror, more than 60 of the crew drowned, including Capt. Lydiard.

For one onlooker, Henry Trengrouse, the catastrophe served as the inspiration to invent several naval safety devices. He crafted a cork-filled life jacket, a bosun’s chair, and a musket-fired rocket device that could cast a safety line more than 100 yards. His rocket line became standard safety equipment for the British navy for over a century.

Appropriately, the Anson’s modern counterpart exceeds the certification standards of Lloyd’s Register and the Maritime & Coastguard Agency (MCA), making Anson Bell one of the safest megayachts ever built. The bell, which lost its clapper when the Anson sank, remains silent, but its legacy rings clearer than ever.