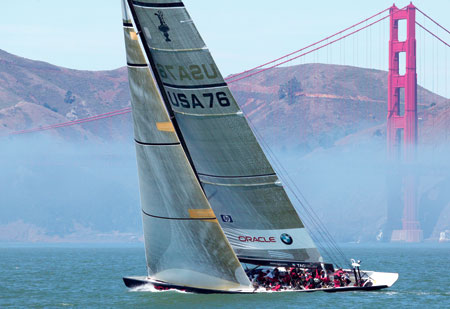 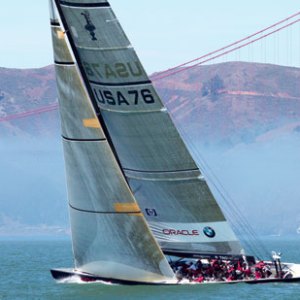 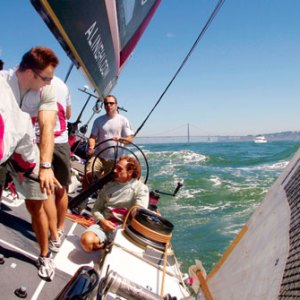 Michael Schumacher probably would not relinquish the keys to his Ferrari to a teenager with a learner’s permit, and it is safe to assume that Chuck Yeager never beckoned a bush pilot into the cockpit of his X-1 sonic boomer. Yet the in-water equivalent of these two ludicrous scenarios is unfolding here in San Francisco Bay, a day after Alinghi’s match race with Larry Ellison’s Oracle BMW team in the Moët Cup. Russell Coutts, skipper of America’s Cup winner SUI-64, has handed over the helm of the mighty vessel to an admitted yachting novice: me.

Six months earlier, SUI-64 had claimed the most coveted piece of yachting hardware, but in this September 2003 rematch, Ellison’s team enjoys the last laugh. Perhaps this is not the best time to introduce a rookie to Alinghi’s 15 crew members and their $8 million machine, but I am welcomed aboard nevertheless.

The syndicate’s decision to surrender the helm suggests the relative simplicity of steering an America’s Cup vessel, and why a newcomer to yacht racing—albeit one with deep pockets and a superior crew—can compete in the sport’s most prestigious race. “Don’t worry, she’s very forgiving,” says Jochen Schuemann, Coutts’ right-hand man. “Compared to a recreational yacht, she is easy to helm. She will go where you point, no questions asked.”

The crackling Kevlar sails, supported by 29,000 pounds of tension, shimmer in the morning sun and catch a puff of wind. My first pull on the carbon fiber wheel, one of a pair mounted above the keel, is a hard turn to port. The rudder bites the water, and SUI-64 lurches to the left; just a feathery touch to the wheel would have been sufficient. I coerce the bow back to starboard. “She is supersensitive, isn’t she?” asks Schuemann. “She is so sensitive that she can spin out like a car. Just treat her like any other yacht. Watch the sails and keep them full.”

The boat is now piercing 8-foot waters, as waves wash over the bow and rush beneath our feet. Suddenly, a fierce gust swats the yacht aside, sending SUI-64 on a 25-degree bank. While I feel the grip of panic, the unflappable Schuemann trims the keel-mounted wings to keep the yacht under control. “Go about!” shouts the wind strategist, snapping me back to attention. Rather than remain standing in the water, I swap to the starboard wheel and point the bow into the wind. The crew members pounce on the winches, resetting the sail for our return tack. The sail catches, and we are off again, the ocean walloping the hull of the boat. Even this ham-fisted skipper could not run SUI-64 underwater, despite our brush with the elements. “See?” says Schuemann with a laugh. “She does spin.”