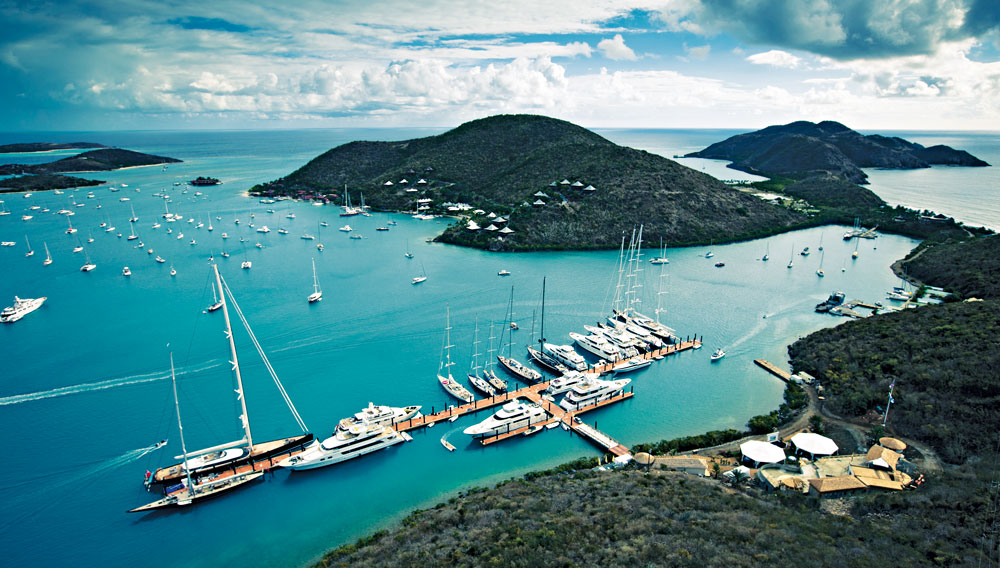 Since it opened on the north coast of Sardinia more than 40 years ago, the Yacht Club Costa Smeralda in Porto Cervo has been one of the Mediterranean’s top yachting destinations. The facility, which includes a 62,000-square-foot clubhouse and 24 guest suites for members, offers direct access to Porto Cervo’s massive megayacht marina but is perhaps best known for the many popular regattas it holds during the boating season. Naturally, then, the official launch in March of the YCCS’ long-awaited sister marina in the Caribbean kicked off with a race: the inaugural Caribbean Superyacht Regatta & Rendezvous at the new Yacht Club Costa Smeralda Virgin Gorda.

His Highness the Aga Khan—yachtsman, financier, hereditary spiritual leader of the Shia Imami Ismaili Muslims, and president and cofounder of the YCCS—had been looking for an appropriate location for a Caribbean outpost of the club for years. His search ended at the eastern edge of the British Virgin Islands, where, in partnership with the Michigan-based development company Victor International Corp., he started building the YCCS Virgin Gorda last October. Set on the island’s tranquil North Sound, the club’s 38-slip marina—the only berthing marina in the British Virgin Islands able to accommodate yachts as long as 328 feet (with drafts of 20 feet or less)—will be followed by a clubhouse with indoor and outdoor restaurants, a bar, and a swimming pool by the end of this year.

“The mission and vision was to build a marina specifically focused on the world’s superyachts and to build the ultimate environmentally sensitive facility,” said Victor International chairman David Johnson aboard his 130-foot motor yacht Resolute at the March regatta, which was open to both sailing and motor yachts. “I spent years talking to experts and interviewing superyacht captains and owners, and I had my own perspective as a yacht owner.”

The YCCS Virgin Gorda offers members yacht berths, priced at $14,000 per foot, as well as a concierge service that includes on-site customs and immigration, mechanical assistance and yacht provisioning, helicopter transfers, island excursions, and more. Members also have access to the beach club at nearby Oil Nut Bay, an exclusive new resort community developed by Johnson, and to the neighboring Biras Creek Resort, a Relais & Châteaux property.

Of course, like its sister facility in Sardinia, the YCCS Virgin Gorda is intended largely as a venue for international sailing events such as the Caribbean Superyacht Regatta, which the club plans to host again in the coming year. “You need planning and events,” Johnson said. “There has to be a reason to come and have fun, so it’s not just a place to tie up your boat.”