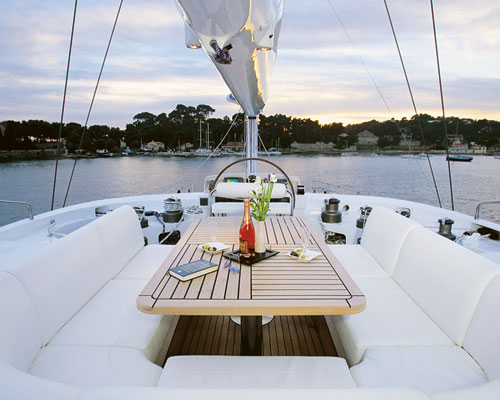 American boaters long have shown a preference for single-hull yachts over catamarans, whether for charter or ownership. Accordingly, many docks in the United States and the Caribbean are not equipped to accommodate the wide-beam vessels, and even at the Fort Lauderdale International Boat Show, catamarans on display are relegated to Las Olas Marina, a dock several minutes away from the primary gathering of megayachts. It is a different scenario in Europe, Australia, and New Zealand, where the catamarans’ performance and space advantages have won over boaters. Sunreef Yachts, a recently established Polish boatbuilder, hopes the debut of its 74-foot catamaran will initiate a similar interest in multihulls among this country’s sailors.

The company, which entered the yachtbuilding business in 2002, is offering the Sunreef 74 for charter in the Caribbean this season for $4,000 per day; the purchase price is approximately $4.5 million. Sunreef completed the vessel in 2003, although the boat was not a part of the company’s original plans.

Sunreef initially was launched in 2000 as a travel agency specializing in catamaran charters. But, according to Sunreef manager Nicolas Lapp, the company was not satisfied with the quality of the vessels in its fleet, so Lapp’s father, Francis, decided to build his own boats. He considered acquiring a shipyard in France or Italy but instead chose Poland, where he owns a utility company, as Sunreef Yachts’ home. “We have many workers in Poland who have experience with boats, and the cost of manufacturing in Poland is lower than in other countries,” explains Nicolas. “Therefore our owners can buy the boats cheaper.”

The company’s goal was to design and build a vessel with the characteristics that make catamarans popular elsewhere: speed, wide beam, and stability in rough waters. But the Lapps and their designers also wanted their boat to have a luxurious interior, a feature that they felt was absent in the catamarans built by companies such as Lagoon and Yapluka Yachts.

For sailors who prefer to steer alfresco, the Sunreef 74 features a helm on the flybridge, which is furnished with a table and wraparound couch.

The saloon and its amenities therefore distinguish the Sunreef from most other catamarans. The 35-foot-wide space, enclosed by a bank of windows offering a panoramic view of the surroundings, includes the captain’s console, a dining room table made of American cherry, couches, and a bar that houses a pop-up flat-screen television. The boat’s lighting, climate, electronics, and even the placement of the dining room table (which slides from the edge of the room toward the center) are controlled from a touchscreen display at the boat’s helm.

The forward master suite and guest staterooms belowdecks have LCD TVs and DVD players, and the lighting and blinds, as in the saloon, can be adjusted remotely.

A second sailing station, furnished with a table and a wraparound couch, is located on the flybridge for those who prefer an outside helm. The 74’s sails are attached to a 98-foot carbon-fiber mast, and the vessel also is equipped with a pair of 240 hp Yanmar diesel engines.

Sunreef is building a $1.3 million, 60-foot catamaran, and it plans to construct a 150-foot model next. “You have all the space you need,” Nicolas says of catamarans in general and his company’s boats in particular, “and when you are sailing, you can go in big waves and not have much motion from side to side. These are special boats.”