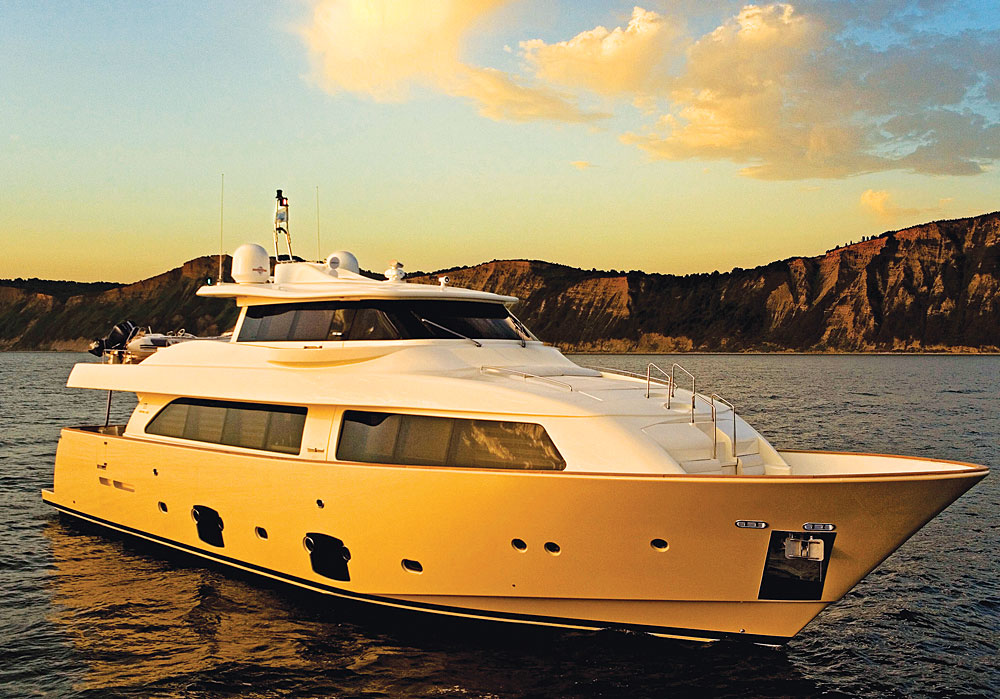 The grand old man of yachting appears to be feeling his years. In earlier days, Norberto Ferretti, founder and chairman of the Italian boatbuilding empire that bears his name, enjoyed offshore powerboat racing, a grueling, testosterone-drenched sport. The high point of his racing career came in 1994, when he won Europe’s Class 1 World Offshore Championship. But now, at age 61, Ferretti acknowledges that his taste in boats has changed. “What I want now,” he said recently, “is to relax and get a good night’s sleep.”

He made this observation during last September’s Monaco Yacht Show, at a dinner in the Hôtel de Paris. The occasion was the debut of two semicustom yachts from Custom Line, one of the nine boatbuilders that constitute the Ferretti Group. (London’s Candover equity house purchased a majority share of the group in late 2006, but Norberto Ferretti remains at the helm.) One of these craft, the Custom Line 97′, is a $9.5 million beauty with a planing hull, sleek lines, and a top speed of 32 mph. But Ferretti clearly favors the other entry, an $8 million vessel called the Navetta 26. Ferretti has adopted hull number one in this line of 85-foot, semidisplacement boats as his personal yacht. “It’s very comfortable and unbelievably quiet,” he said at the Monaco dinner. “I sleep like a baby. And in the morning, after the boat cruises all night, I get to wake up and see someplace entirely new.”

Comfort is a focus throughout the three-deck Navetta 26. This is most evident in the sky lounge, which is furnished with two big sun beds, a hydromassage bathtub, and a table that can seat as many as eight. The vessel’s interior, with its open spaces and long sight lines, represents a departure from many European yachts, which can be murky and cramped. The master cabin, positioned on the main deck, features an office nook, a wardrobe, and an en suite bathroom with shower, while the three cabins below have large windows that admit plenty of light. The VIP guest suite is especially large, extending the full length of the 23-foot beam. (In April, Custom Line will unveil larger versions of the 97′ and the Navetta 26: a 112-footer and the 107-foot Navetta 33, respectively.)

Several technologies aboard the Navetta 26 contribute to the silence that Ferretti cherishes. “We’ve insulated the line shaft from the engine with elastic dampers,” notes Andrea Frabetti, Ferretti Group’s vice president of engineering. “And we’ve installed two exhaust silencer systems, not one.” The company also insulated every piece of equipment in the engine room. “When we tested the master cabin, the loudest sound was the air-conditioning,” says Corrado Del Fanti, a Custom Line manager. “So we fixed that.”

The Navetta 26’s range is an impressive 1,600 miles, but its top speed is a modest 17 mph. However, speed was not Custom Line’s main goal in designing the yacht. “We could have achieved a fast time,” observes Del Fanti, “but we were more interested in delivering quality time.”