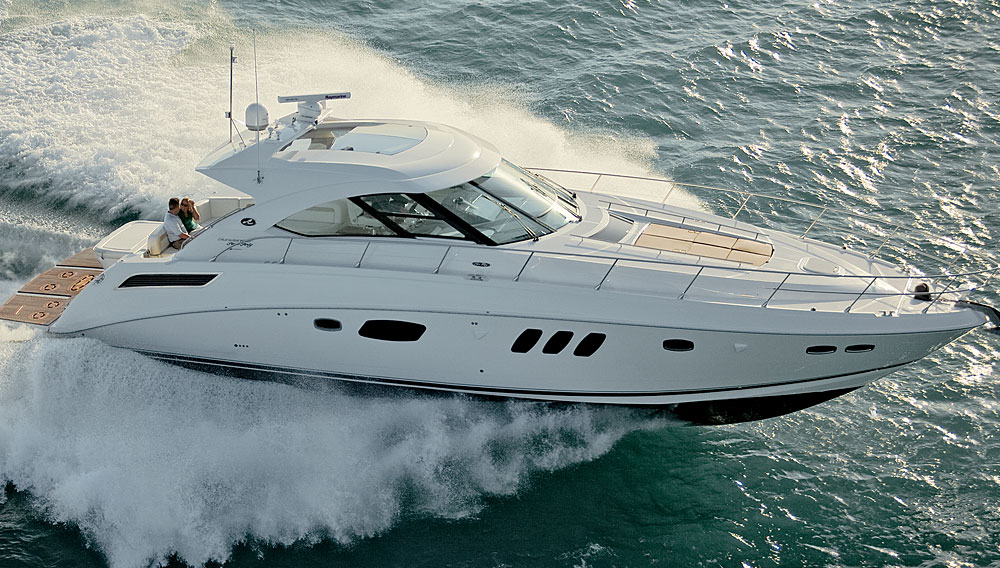 Less than a decade ago, many express cruisers designed by American companies had straight hull lines, reverse-facing radar arches, and interiors that resembled crawl spaces rather than spacious waterfront suites. Though these homegrown vessels performed well, they looked downright square when compared with sleeker and sexier imports from Italy and the United Kingdom.

Today, at least one American brand has seen the light. Sea Ray, a boat manufacturer based in Knoxville, Tenn., is embracing the elegant, sinuous lines of its European competitors and powering its new designs with the latest in propulsion technology. The 540DA, the company’s most recent launch, embodies this approach with a sleek, aggressive exterior; a large, well-appointed interior; and a Zeus pod drive system mated to bold Cummins MerCruiser Diesel motors.

This summer Robb Report checked out the $1.4 million 540DA at the MarineMax dealership near Barnegat Bay in Brick, New Jersey. The boat’s spacious cockpit has been designed for entertaining with helm and companion seats on a centerline pedestal. The cleverly designed rear lounge has a winged back that opens to create a massive sun pad.

The 540DA’s extra-roomy interior represents a significant improvement over those of previous Sea Ray models. The sleeping areas in the two-stateroom version (there is also a model with three slightly smaller staterooms) feel more like suites than cabins. The forward VIP cabin is opulent, with a queen-size bed, Bose sound system, and full head. Most notable is the 540DA’s master stateroom, which includes an innerspring bed, a Bose entertainment system, and a flat-screen TV.

More impressive than its interior design, however, is the 540DA’s turn-on-a-dime handling, made possible by the boat’s Zeus pod drive propulsion system. The Zeus pods are propellers that work independently of each other and rotate 360 degrees on their axes, enabling a captain to maneuver the boat in almost every direction, including sideways. Each of the pods connects directly to a 600 hp Cummins MerCruiser Diesel engine, so, unlike typical marine systems with long drive shafts, they are ultra-efficient. From the helm of the 540DA, the captain can manipulate these pods by using the boat’s most impressive technological feature: the joystick control. It takes a bit of practice to master this technology, but users will soon find that, with a flick of the wrist, they can turn the yacht laterally and gently slide it sideways—maneuvers that even the most seasoned skippers find difficult to accomplish with traditional propulsion systems. Zeus also offers the Skyhook option, a GPS-based system that automatically keeps the yacht stationary, even in currents or heavy winds.

Pod systems are the future of maritime propulsion technology, particularly in yachts less than 100 feet in length. Sea Ray, with the 540DA, is one of the first U.S. builders to have embraced this sea change successfully.