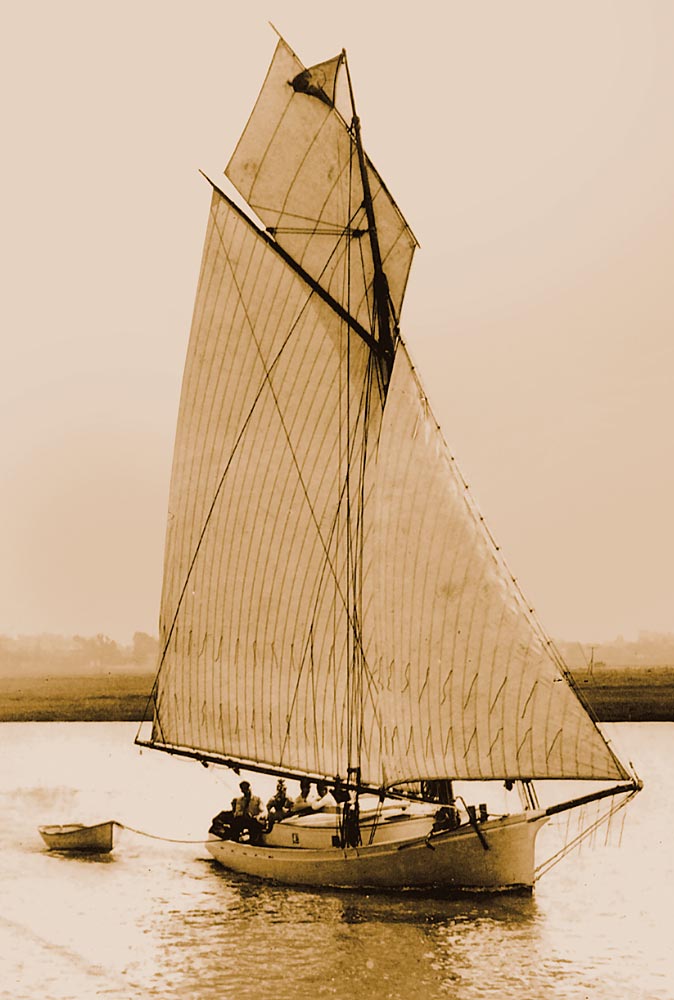 On the western edge of San Francisco Bay, on an increasingly developed stretch of Sausalito shoreline, is a small, unassuming boatyard called the Spaulding Wooden Boat Center. An old, three-legged derrick crane sits quietly near the water, while stacks of wood planks that will eventually be used in yacht refits haphazardly punctuate the property. Several sailboats in different stages of repair rest on blocks. Spaulding is one of the few remaining yards on the West Coast that restore wooden boats, a dying business model in an age of fiberglass and steel vessels.

The 32-foot gaff sloop Freda, with its hull’s curved, wooden frames jutting out like the bare ribs of a dinosaur, is the center’s showpiece. Built in nearby Belvedere in 1885, Freda is one of the most important maritime treasures in California. “She’s the oldest yacht on the West Coast in active use,” notes Bob Darr, founder and director of the Arques School of Traditional Boatbuilding, which instructs craftspeople in the art of constructing and restoring wooden boats. Arques is located on the same premises as the Spaulding yard, and is participating in Freda’s restoration. Though there were a number of yachts of that type built, Darr says, “we don’t even have any rotting hulks left. Historically, Freda’s quite unique, and very famous around San Francisco Bay.”

The same can be said about Spaulding, a quaint reminder of what boatyards were like before they became giant parking lots with production lines. Myron Spaulding—whose work included stints as a musician for silent movies, a concert violinist with the San Francisco Symphony, a yacht designer, and a fiercely competitive sailor—founded the yard in 1951. It became known in San Francisco’s yachting circles as the place to have one’s vessel restored. “It was really a quiet boatyard,” says Spaulding’s boatyard manager Michael Wiener, who describes the company’s founder as an idealist in a very practical world. “Myron was more into perfection than production. He focused intently on everything he did, so he didn’t take on a lot of projects.”

When Spaulding died in 2000 at the age of 94, his yard could have easily gone the way of other boatyards in the area that had been converted into waterfront condos or cafés. But Spaulding’s widow, Gladys, left it in a charitable trust with instructions that it be established as a nonprofit.

Today the company still functions as a boatyard, but with an educational center and a museum. Freda—the matriarch of San Francisco’s sailboat fleet—will become the center’s crown jewel. Darr says the yacht, which was built by a saloon keeper on the beach in Belvedere, has been restored several times, including in the late 1990s when he and his students replaced the deck and cabin. “The owners were unable to pay for materials needed for the hull,” he says, “so she just sank at the dock in 2006.”

The Arques students and volunteers are completely overhauling Freda, with the exception of an original iron keel. “We’re going to rebuild her in a very traditional manner,” Darr says. “Our students picked out black locust trees in the forest for the frames. We use some power tools, but most are traditional hand tools. That’s the way she was built, so we do it that way.” Because the project’s funding relies on donations, it might take another year or two to restore Freda to her former glory. However, says Darr, “she will be a very dramatic boat when she is finished.”

Demand for Private Submersibles Is Soaring. Here’s What It’s Like to Take One on an Underwater Dive.

Boat of the Week: Inside the 7-Year Quest to Build ‘Dream Symphony,’ the World’s Largest Sailboat