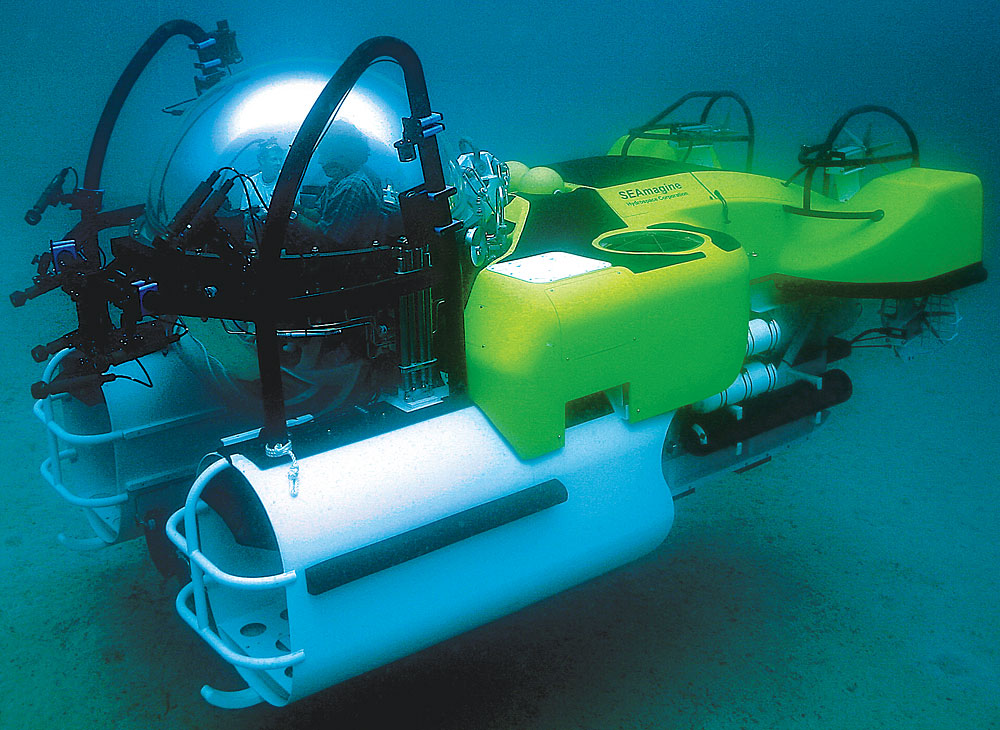 Like a Giant Oyster, the personal submersible’s transparent, spherical cabin closes, and William Kohnen—one of the craft’s inventors—and I slip slowly beneath the surface of the water. Two scuba divers follow us, taking pictures of the descent. As we approach the ocean floor, a sand dab skitters across it, the two eyes on the side of its head seeming to stare at the sub. With the divers dancing around us, the ocean opening up before us, and the barge above casting shadows over us, I feel a disorientation that is difficult to shake. As if reading my mind, Kohnen murmurs, “There are days when it’s like trying to take a sip of water from a fire hose. You can barely take it all in.”

Kohnen and his brother, Charles, began conceiving this personal submarine more than a decade ago. At that time, William worked as an electrical engineer for an aerospace firm, where he helped design motor systems for cameras and power panels for the International Space Station and the Hubble Space Telescope. Charles worked for an energy company, operating control and monitoring equipment for offshore oil exploration. In 1995 they decided to pool their experience, and within two years their company, Seamagine Hydrospace, was testing a prototype submarine off Southern California’s Catalina Island.

The sub that William is piloting today, in King Harbor off Redondo Beach, is that very vessel, hull number one of Seamagine’s Seamobile series (four have been built so far). The craft measures 15 feet long and 8.5 feet wide, and its cabin, which is 54 inches in diameter, holds two people. Operating a Seamobile requires three people: a pilot, an alternate pilot, and a topside controller who monitors and records each dive.

Air bladders housed in the Seamobile’s sides allow it to function as a surface vessel as well as a sub. Indeed, the craft floats when its propulsion systems are off, and if those systems fail while the vessel is submerged, it will rise slowly to the surface. Vertical thrusters are needed to push it underwater.

Seamagine subs have been used for tourism and for nautical archaeology, but they also make great water toys for superyachts—ones equipped with cranes or other types of lifts. The company will help you gain regulatory approvals for a sub, including safety certification from the International Maritime Organization.

An entry-level Seamobile costs $980,000 and can dive to 500 feet. The top-of-the-line version, which can dive to 3,000 feet, starts at $2.35 million. In 2005, the company created a three-passenger model called the Triumph, which dives either to 1,500 feet ($2.3 million) or to 3,000 feet ($2.9 million). The company offers a training program for pilots and controllers, usually conducted where the sub is delivered to the support vessel. The program costs about $50,000 and runs from four to six weeks. Seamagine requires 12 to 26 months to deliver a sub, depending on the model and specifications.

As we approach the bottom of King Harbor, I take control of the Seamobile and find it surprisingly easy to operate. You control the craft’s motions through a joystick, moving the device in whatever direction you want the sub to travel: forward or backward, left or right. When I press one of the two buttons next to the joystick, the Seamobile descends deeper. Alas, at some point, I will have to press the second button, which will take us to the surface.