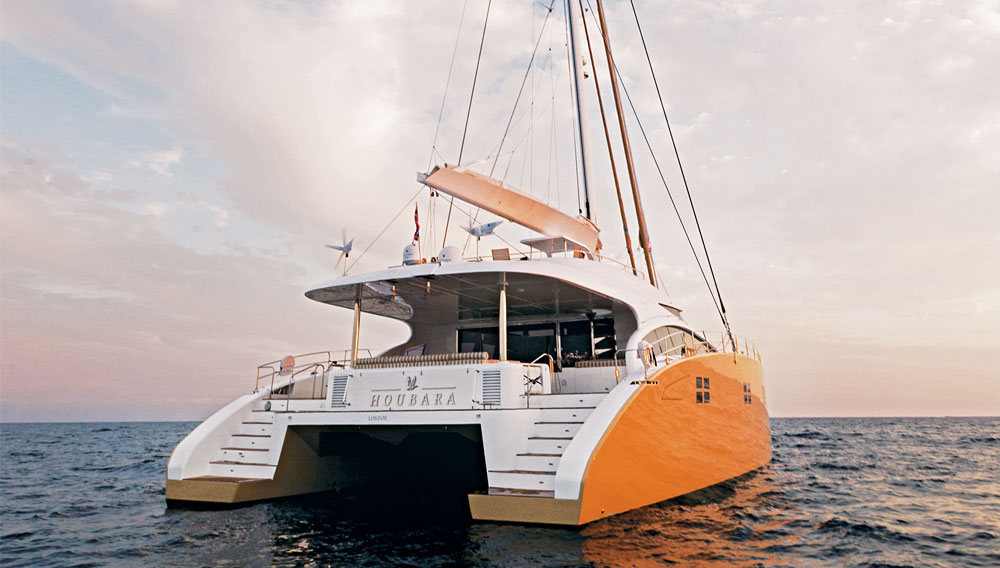 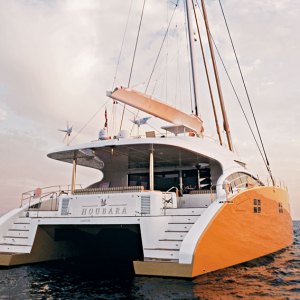 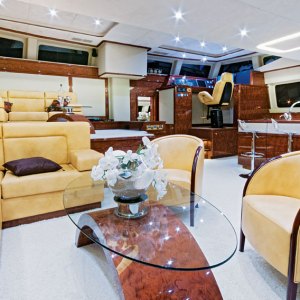 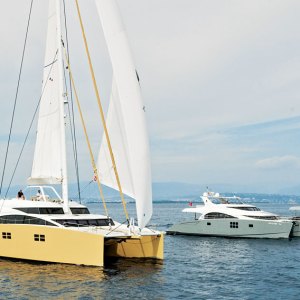 As recently as a decade ago, the European owner of the newly launched Houbara would have been hard-pressed to find a builder for his dream yacht. Among his many requirements for the boat were that it be small enough for him to sail with just two crew members but sufficiently spacious to provide ample interior room for as many as seven passengers. He also wanted the yacht to be fuel efficient when under power of the motors and to have a shallower draft than those of single-hulled models of the same length. With the launch of Houbara—an 82-foot, dual-hulled sailing yacht that was delivered last July—the Polish shipyard Sunreef Yachts has not only fulfilled the owner’s stipulations but also demonstrated just how far catamarans have come in the past 10 years.

Houbara is the first example of the Sunreef 82, the newest and largest semicustom sailing model from the decade-old builder, which is based in the city of Gda´nsk on the Baltic Sea in northern Poland. Sunreef’s initial launches in the early 2000s made a splash at major boat shows, primarily because they were the first catamarans designed and built to the standards of top megayachts. The yard’s sailboats combined tremendous stability and seaworthiness with first-rate fit, finish, and features—such as expansive flybridges—that were unprecedented on dual-hulled vessels. With the Sunreef 82, the builder has once again set the standard for high-performance, high-comfort catamarans.

The Sunreef 82 is the largest of the yard’s yachts to employ a composite hull and structure, which gives it a relatively light displacement of 58 tons. This helps improve fuel efficiency without sacrificing stability in choppy conditions, when the boat’s twin hulls and 37-foot beam ensure smooth sailing. The hull-and-beam design also allows for a draft of only 6.5 feet, which enables the catamaran to access shallow waters and ports.

The Sunreef 82’s composite construction also eliminates the need for much of the bracing and other structures that can detract from functional onboard spaces on catamarans. As a result, Houbara accommodates the owner’s family and guests with sleeping quarters for as many as seven passengers. Cabins include a VIP suite, a double stateroom with a Pullman bed, and a full-beam, 344-square-foot owner’s suite that includes an indoor hot tub surrounded by an orchid garden.

Houbara’s saloon measures about 700 square feet and seats as many as eight guests for meals. But the owner’s favorite spot on the boat is the nearly 400-square-foot flybridge, which is equipped with the vessel’s primary helm station. The flybridge also includes a barbecue grill, a wet bar with an icemaker, dining and coffee tables, and plenty of outdoor space for lounging—amenities that did not exist on catamarans before Sunreef Yachts set sail.