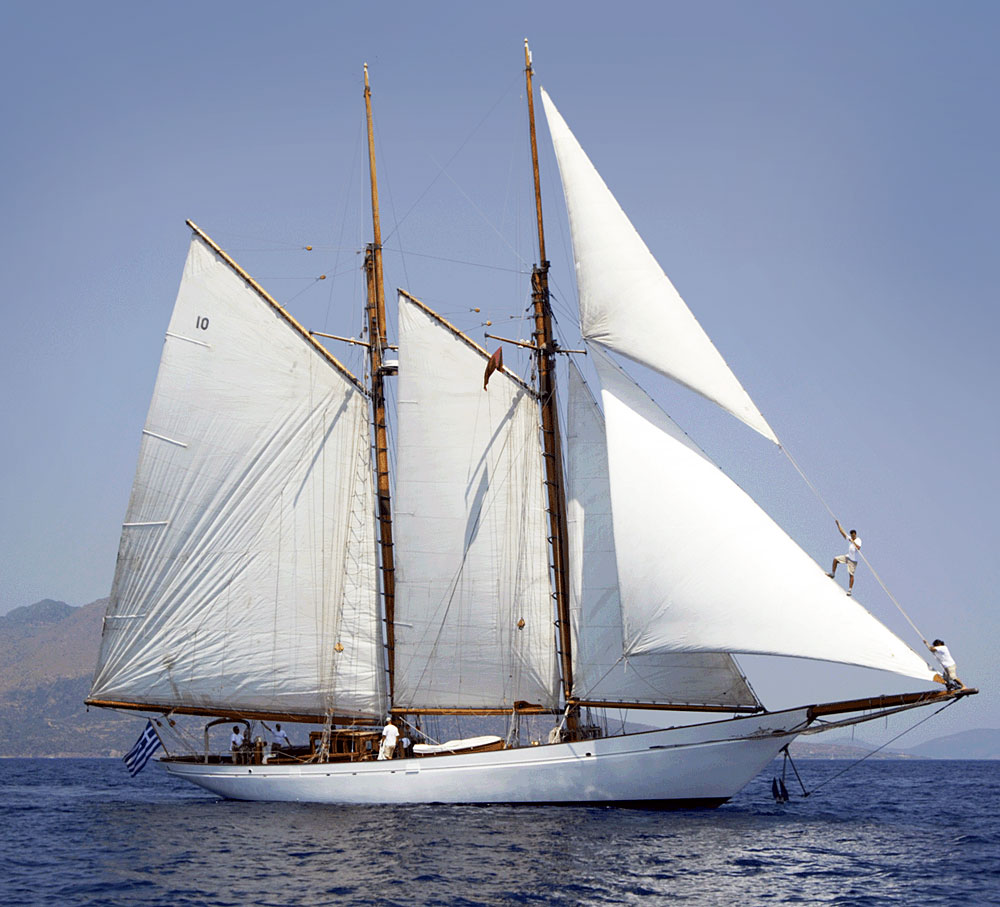 Amid the cluster of boats at the marina on the Greek island of Poros, Aello is a standout, though not in a way that makes her a magnet for charter. The circa-1921, 125-foot sailing yacht lacks king-size beds, big hot tubs, and zero-speed stabilizers. But she has character.

Corinne Demougin, charter manager in the Monaco office of Fraser Yachts Worldwide, smiles enthusiastically as I join her on the vessel’s teak deck, proud of this grande dame that Fraser is offering for charter. Yet Demougin, who also brought the 1920 British build Lulworth into Fraser’s fleet, is well aware of the realities of the business. “It’s a challenge,” she says as we step inside the cabin to meet the boat’s manager, Alexis Varouxakis. “You need to find people who appreciate this kind of yacht.”

Aello was built at a time when boaters took small cabins in stride, and her beds are more appropriately called berths. The main salon is beautifully finished but cramped by today’s standards, and as I search fruitlessly for a plasma TV, I conclude that I probably would grow claustrophobic during a rainy week aboard.

Even so, I would love to take Aello sailing. Built for Greek yachtsman and art collector Antonios Benakis, she is a replica of Meteor IV, which Kaiser Wilhelm II launched in 1909 as a follow-up to his famed racing yacht, Germania. Meteor IV, which disappeared during World War I, is remembered today as one of the most beautiful schooners ever made.

Aello, named after the winged maiden in Greek mythology, served as a pleasure craft in Greece until just before World War II, when a British naval officer bought her and set out to tour the world. According to the vessel’s logbook, he made it at least as far as Singapore. How Aello ended up sunk in a riverbank in England is a mystery, but she was discovered there in 1986, remarkably well preserved by the thick mud. A New Zealander named Cameron Thisolm restored her, and by the late 1990s she had become a favorite racing yacht of the Rockefellers, who docked her in Fort Lauderdale, Fla.

The boat remained in the Rockefellers’ possession until 2002, when her history came full circle. At that time, the son of a Greek shipping magnate—Alexis Varouxakis’ brother—was seeking to acquire a traditional Greek sailing craft. “He looked all over the world for a year and a half,” Varouxakis recalls as sunlight streams into Aello’s salon through her skylight, which has a pair of large windows that open like butterfly wings toward the sky. “Originally, the Rockefellers didn’t want to sell; they’d been winning classic regatta races with her.”

Eventually the owners relented, and in 2003 Aello returned to Greece. She served as a personal yacht until last summer, when Varouxakis began offering her for charter in the Mediterranean, in the waters around the Greek islands. This summer, Aello is expected to cruise the same area. She accommodates as many as 12 guests, although she probably would be more suitable for two or three couples, and is available for a base rate of about $52,000 per week.

“With her sails up, she is quite amazing,” Varouxakis says. “She’s like a living thing.”