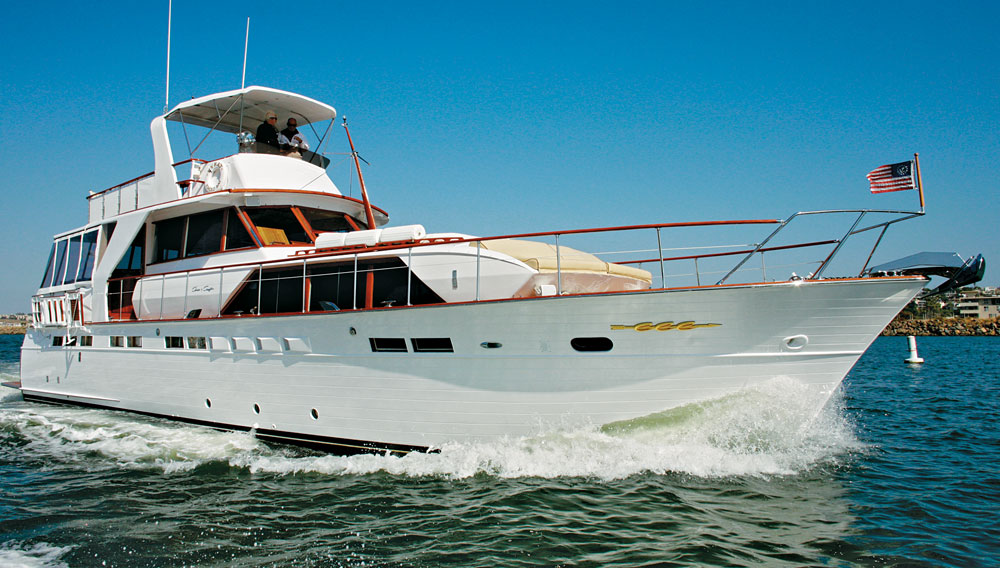 John Paul Dejoria likes to hit the road in his 1957 Chevy Bel Air and ride the tracks in his private 1927 American Car and Foundry Company railcar. So when the owner of Paul Mitchell Hair Systems and the Patrón Spirits Company (see “The Robb Reader,” page 144) decided it was time for a boat, he limited his search to another American classic. “He wanted a Chris-Craft Constellation,” says Chris Shaffer, co-owner of the Los Angeles boat-restoration company Shaffer Design Group. “That’s what the Kennedys had. It’s what Sinatra had. It’s what Elvis had.”

To acquire this slice of Americana, DeJoria turned to Shaffer and his brother, Bill, who have been restoring boats since they were boys. “My dad was a big-time sailor,” Chris says. “So he was always buying these funky old boats, and they would end up in our backyard. We would do all the scraping, painting, and varnishing. We probably stripped 100 engines together over the years. It was how we bonded with our dad.”

The Shaffers began restoring boats professionally in the 1970s, as Pacific Blue Water Marine. (They changed the name to Shaffer Design Group in 2009.) The brothers have known DeJoria since the 1980s, and, in addition to running their restoration business, they both now work for him: Bill heads Patrón’s Los Angeles–based public-relations efforts, and Chris is involved with much of the entrepreneur’s nonprofit work.

DeJoria first approached the Shaffers about the Chris-Craft in 2009. The brothers, who refit vessels ranging from 40-foot sportfishers to 300-foot yachts, soon found a 57-foot example of the boat, which was known as the Connie. Chris-Craft produced hundreds of Connies between 1955 and 1972, but this specific boat, from 1968, was unique. “As far as we know, this is the last big mahogany Chris-Craft ever built,” DeJoria says. “And it was actually built for the owner of Chris-Craft.”

The double-planked mahogany hull remained in good condition, but the rest of the boat required a complete refit. The Shaffers went to work alongside DeJoria; his now 15-year-old son, John Anthony; and a team of engineers, electricians, woodworkers, and other design and boating veterans that included interior designer Penny Shaffer of Walton Street Design.

Completed last April, the 18-month restoration entailed everything from modernizing safety equipment and entertainment systems to replacing the worn wood of the main deck, house deck, and flybridge with Burmese teak (which DeJoria and his son selected and helped sand and varnish). The Shaffers’ extensive use of mahogany and cocobolo woods, handstitched leathers, and stainless steel enhances the Constellation’s vintage appeal.

Christened Pyrat after Patrón Spirits’ premium rum brand, the restored Constellation reflects DeJoria’s taste for the classics. “This is a one-of-a-kind heirloom yacht,” Chris says. “It will be enjoyed for many years to come and passed down from generation to generation as a DeJoria family treasure.”