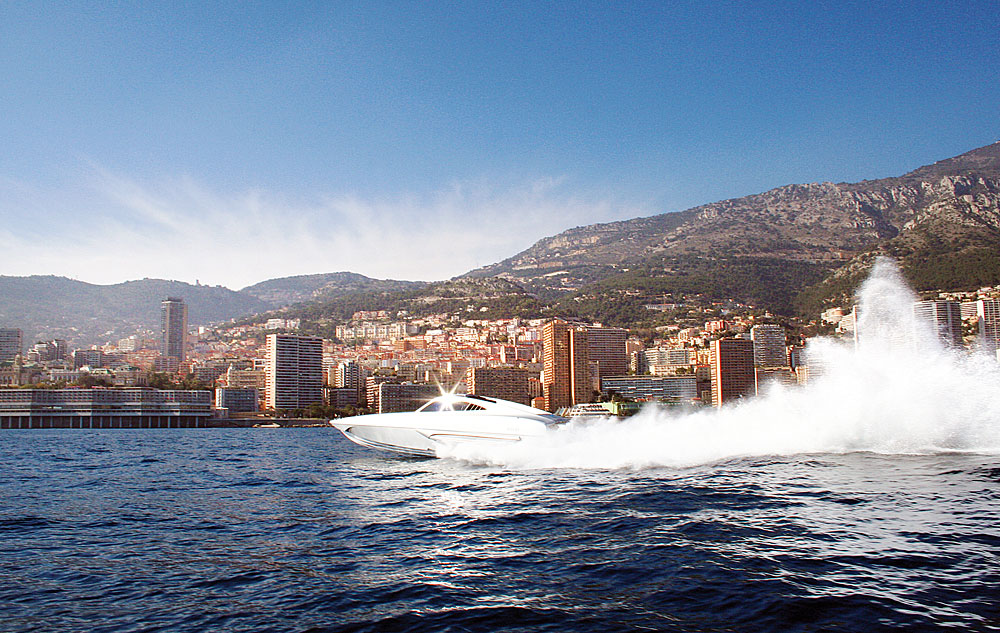 On the deck of a gigayacht, two bikini-clad young women point at themselves, then at the driver of the powerboat that is racing toward them across Monaco’s harbor: They want a ride. The driver, Simon Powell, offers a carefree wave and then, to their dismay, shoots past them at 45 mph. He is here for business, not pleasure.

Powell is an offshore racer who holds the record time for the Monte Carlo to London endurance run. For the past seven months he has been testing this 48-foot vessel, a prototype of the XSMG XSR48, one of the world’s fastest production powerboats.

It is a sunny morning during September’s Monaco Yacht Show, and Powell is putting the boat through its paces. XSMG chief executive Ian Sanderson and his business partner, Peter Dredge, brought the prototype to Monaco a couple of days earlier, along with their first production vessel. After 30 months and 65,000 hours of development work, XSMG recently began taking orders for the $2.5 million craft.

“Now,” says Powell, grinning, “I’m going to show you that the theory of relativity is true.” He points the slim vessel toward the open sea and presses the throttle. Within seconds, the boat has accelerated to 85 mph. Even at this speed the ride is quite smooth, thanks partly to the boat’s seats, which are equipped with hydraulic cylinders that absorb shocks. Powell turns the wheel, and the boat corners tightly and without buffeting. Then he returns abruptly to 45 mph.

Sanderson and Dredge, both offshore racers, based the hull on one created by acclaimed Italian raceboat designer Fabio Buzzi. After establishing XSMG Marine in 2004 in the United Kingdom, they worked with the British superyacht design firm Redman Whiteley Dixon to refine the concept. They equipped the carbon-and-Kevlar craft with twin 800 hp Isotta Fraschini diesel engines that have two turbochargers each, a configuration that provides tremendous acceleration.

The production boat can have as many as six seats in the cockpit and features a double berth and stand-up shower belowdecks. The company offers a closed-cockpit version and one with a cockpit that is open at the back—both of which provide enough protection, Sanderson says, to “keep the occupants conscious” in the event of a rollover at high speed. He and Dredge are acutely aware of the boat’s dangers and insist that buyers undergo at least two weeks of training by XSMG.

One potential buyer took a test-drive at the Monaco Yacht Show and found the experience quite pleasurable. “When we stopped, I felt like I’d just had sex,” she said afterward. “I had to go to my yacht, lie down, and smoke a cigarette.”