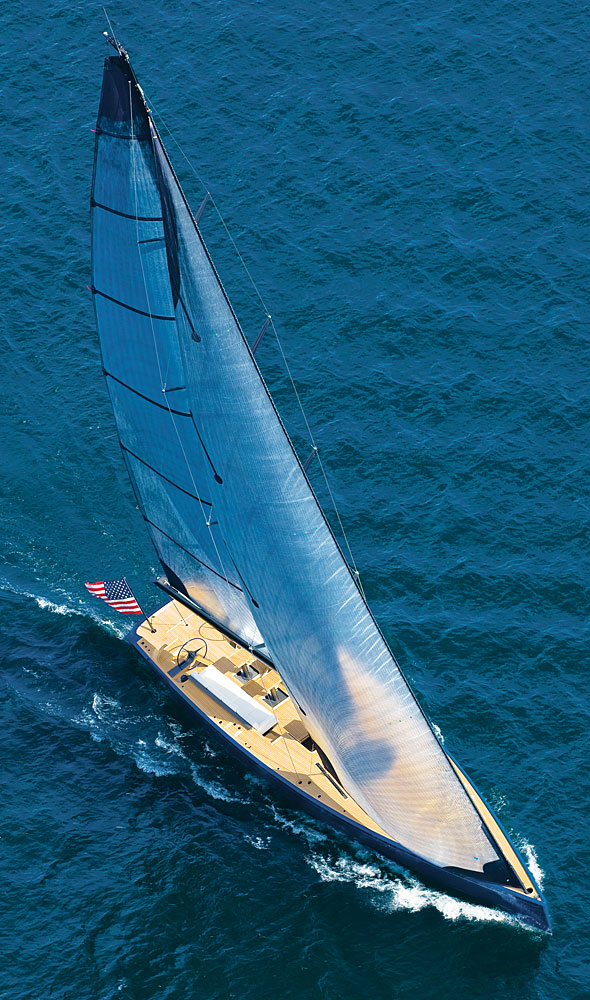 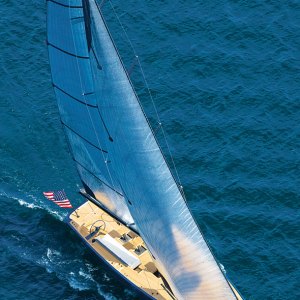 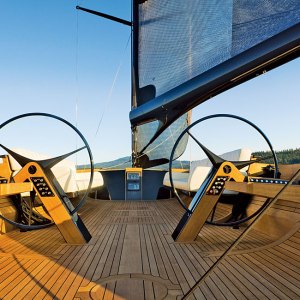 Every summer evening, just after the sun sets over Coeur d’Alene Lake in northern Idaho, the Wolf Lodge Express gathers steam in an eastern bay and hurtles west across the 50-square-mile body of water. The Express—a land breeze that forms when the hills around Wolf Lodge Valley cool faster than the lake’s surface—is as powerful as it is punctual, routinely blowing at 12 to 15 knots. On many evenings, the breeze catches the massive carbon-fiber sails of a yacht that was custom-built to ride the local phenomenon.

Sizzler, a 60-foot sailboat that—thanks to an elaborate hydraulic system—can be sailed by a single person, represents the vision of media mogul and developer Duane Hagadone. “I’ve always had a sailboat,” says Hagadone, who has spent each of his 76 summers in Coeur d’Alene, “and I had this dream of building a sleek boat that I could sail by myself on the lake.”

Hagadone’s dream did not involve overnight accommodations, as he intended to use his yacht primarily for cocktail cruises to lakefront restaurants, followed by nighttime sails on the Wolf Lodge Express. To fulfill his vision, he enlisted Southampton, England–based yacht architect and designer Tony Castro, who drew up plans for a monohull with a 90-foot carbon-fiber mast—huge by lake-boat standards.

Both Hagadone and Castro planned to have a major shipyard build the yacht, but as the design evolved, they realized the solution was closer to home: Hagadone’s very own boating company, located just down the lake from his Coeur d’Alene house. However, Hagadone Marine Group’s Resort Boat Shop, which specializes in restoring smaller wooden boats, had never taken on anything like Sizzler. “First we had to build a building that we could make it in,” recalls Hagadone. “It was a huge project, and to have it turn out as beautifully as it has is just an unbelievable credit to the team.”

Hagadone launched Sizzler (Castro suggested the name in response to the owner’s desire to add extra features, or “sizzle”) in July 2007 after a 13-month build. The craft has a traditional cedar-and-mahogany hull but is otherwise strikingly modern for a lake boat. “It’s so sleek,” says Hagadone, “that it looks like it’s going 10 knots when it’s tied to the dock.”

In addition to the mast, the boat’s carbon-fiber parts include everything from the helm to the head. The hydraulic system—set belowdecks in an area that would usually hold a master cabin—controls the yacht’s 2,852 square feet of sails, as well as its keel (which rises from 12 feet to 8 feet for entering shallow water). These and other functions, including underwater and onboard lights, can be operated by fingertip from twin helms, located at port and starboard near the stern side of the cockpit.

Because Sizzler is intended for entertaining, the boat’s cockpit is larger than those of most vessels its size. Couches line the nearly 30-foot-long space, and tables rise up from the teak deck for cocktail service. “The boat is made exactly to the owner’s preferences in every way,” says Sizzler’s captain, David Kilmer, who has skippered and raced several sailboats in the Caribbean. “Any other boats I’ve been on have had to make compromises, but there are no compromises on Sizzler.”

Kilmer is equally impressed with Sizzler’s performance. “We knew that it would look great, but you always hold your breath wondering how it’s going to sail,” he says. “Sizzler sails like an absolute dream. The steering is a pure linkage from your hand to the rudder. The thrill that you had taking a little Laser out on a lake for the first time—that’s what Sizzler feels like.”

This rush is most pronounced when the sun goes down and the Wolf Lodge Express picks up. “I remember the first time we took Sizzler out to a restaurant,” says Kilmer. “When we headed home, there was this pure thrill of being out in the dark. We’ve got the rail down, we’ve got the boat lit up from one end to the other, we’re charging along with the water rushing past, and Mr. Hagadone turns to me and says, ‘This is exactly what I dreamed about when I built this boat.’ “

The joys of sailing Sizzler—or at least a boat just like it—may not be limited to Hagadone and Kilmer. Now that the Resort Boat Shop has completed the yacht, the yard is equipped and eager to take on another commission. “The team would love to build another one,” says Hagadone. He declines to reveal how much Sizzler cost, but adds, “If a second one were built, it would be substantially cheaper than mine because of all the equipment and training that was required.”

Kilmer, for one, hopes the next commission comes from a sailor in Coeur d’Alene. “We need another just like it,” he explains, “so we can race her.”