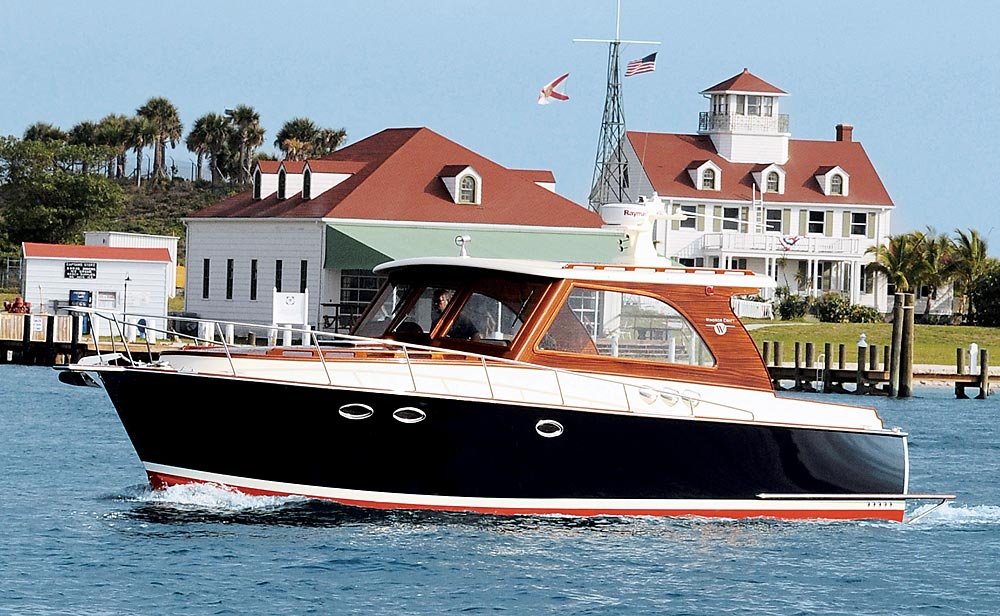 At the Crosby Yacht Yard on Cape Cod, Mass., berthed not far from John F. Kennedy’s wooden sloop, Victura, lies a Windsor Craft 36, an expertly crafted mahogany yacht with a classic Down East hull shape. The joinery throughout the boat is virtually flawless, with curves that arc through the cabin and gaps between the solid-mahogany doors that measure precisely one-eighth of an inch all around. The exact detailing and translucent glow of the mahogany simply cannot be replicated in fiberglass.

The Windsor Craft is available in three models: 30-, 36-, and 40-footers, with starting prices of $508,000, $630,000, and $1.2 million, respectively. The classic cruisers—mahogany alternatives to high-end picnic boats from fiberglass builders—are uncommon in the yachting world, not only for their wooden hulls but also for their modern electronics.

For Irwin Jacobs, chairman of Genmar Holdings, Windsor’s parent company, the creation of these boats was a labor of love that took almost two decades to bring to fruition. “When we launched Windsor Craft in 1990, the boats had fiberglass hulls, with mahogany cabins and teak decks,” Jacobs says. “I was building the boat, almost as a hobby, in my Glastron factory in Minnesota, and screwing up production of the other boats. They were relieved when we shut it down.”

But Jacobs, who oversees the world’s second-largest boatbuilding company, was determined not to let his dream die. His 12 other brands, which include Ranger fishing boats and Four Winns recreational boats, are the Fords and Chevys of the boating industry and account for tens of thousands of new hulls each year. To this portfolio of vessels Jacobs would add what he described as a limited-edition Bentley.

After searching the globe for expert craftsmen in the dying art of wooden boatbuilding, Jacobs came across Vicem Yachts, a high-end builder of mahogany sportfishing yachts based in Turkey. “It took us a year to get it right,” he says of the collaboration with Vicem. “We had engineers going back and forth all the time to get the level of detail this boat demands.”

That detail is amplified in the recently launched 40-footer (larger Windsor Crafts are on the drawing board), with its queen-size berth, separate head, and large salon in the cockpit. “Besides craftsmanship, there’s an art to building these,” Jacobs says. “Each piece of wood is picked out from the same tree, so the grains match, but not identically. We want each boat to look unique.”

Beauty and bulk coexist on the Windsor Craft 40. The hull is composed of three layers of mahogany planks infused with resin to create a watertight, oceangoing body. “Its running characteristics are very different than a fiberglass boat,” says David Pulsifer, sales manager of the Crosby Yacht Yard. “It’s noticeably quieter, and you really feel the substantial weight of the hull.”

Windsor Craft also has injected an element of modernity into the boat, with a bow thruster, an electric windlass, and cabin amenities including granite counters, custom stainless-steel hardware, a wine cooler, an electric sunroof, and Raymarine electronics.

“We don’t see a huge market for these boats,” Jacobs says. “But for those who love the look of mahogany, without much of the upkeep of older traditional wooden boats, it’ll put you in a very special fraternity.”