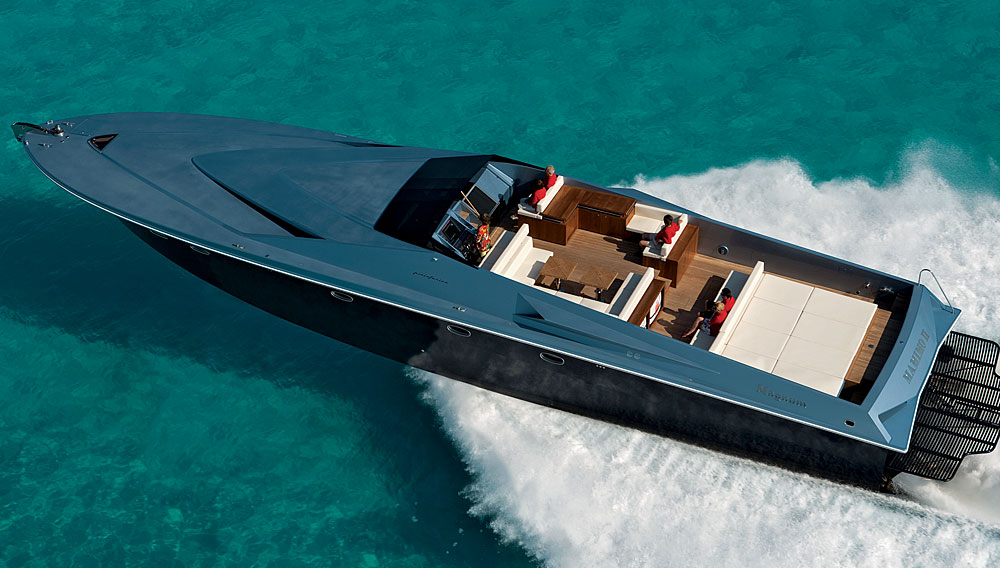 If there were a royal line in the American yachting industry, Magnum Marine would surely have a legitimate claim to the throne. Three decades ago the South Florida company created a line of sleek, powerful boats that typified the Miami Beach scene of the 1980s. Today, Magnum enjoys a high profile in the same luxury-performance category it pioneered. Competitors imitate its designs, and celebrities embrace its brand power.

With its most recent build, an 80-foot yacht that its owners have named Mamimo II, Magnum hopes to elevate its stature even higher. “This is the most beautiful Magnum we’ve ever built,” says the shipyard’s proprietor, Katrin Theodoli. “We’ve concentrated on creating a beautiful design, but we’ve also built it for performance. Our boats are for people who enjoy going out to sea.” Mamimo II, which Magnum delivered to its owners last spring in Monaco, features twin 2,400 hp diesel engines and a custom interior conceived by the Italian design firm Pininfarina. It is one of three 80-footers built recently at the company’s shipyard.

In crafting these boats, Magnum’s engineers have drawn upon the company’s formidable experience in manufacturing and design. Powerboat-racing champion Don Aronow founded the company in 1966 in an area of North Miami Beach that would eventually be called Thunderboat Row for the distinctive muscle craft built there. Filippo Theodoli––an Italian marquis known to friends and clients as Ted––purchased the company from Aronow in 1976. “Ted envisioned creating a large, open, high-performance yacht,” says Katrin Theodoli of her late husband, who died in 1990. His first design, a 53-footer, was, she says, a tremendous success. He went on to develop Magnum’s signature style, which is defined by long, sleek lines and plush interiors by Pininfarina. “After that,” Theodoli says, “the trend in high-performance yachting developed around the world.”

Today, as Magnum faces strong competition in the luxury-performance category, the quality of its custom interior designs continues to give the brand an edge. For example, the owners of Mamimo II wanted a lavish interior but did not want a lot of beds or accommodations for overnight guests. Working with its partners at Pininfarina, Magnum created an interior that features large, open spaces and two VIP cabins with custom teak accents. Magnum’s first 80-footer, by contrast, has three double staterooms, an oversize galley, and three heads. “That owner likes to live aboard the boat with his family, and his captain likes to cook,” she says. “So we created a fast yacht with full cruising amenities.”

For now, Magnum will continue to build highly personalized, jaw-dropping boats such as these. Theodoli says that her son, Giovanni––who was just 14 when his father died—hopes to follow in his parents’ footsteps. “We have been approached many times by companies wishing to acquire us, and this can be tempting,” Theodoli says. “But Magnum has always been a leader in this industry, and we want to maintain that status.”