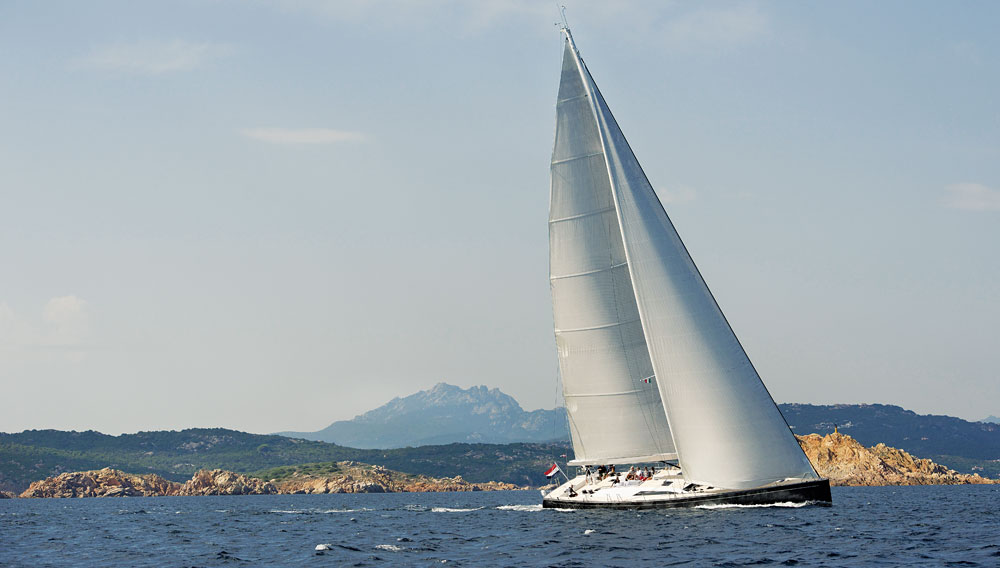 Two years ago, Finland’s Nautor’s Swan replaced its venerable fiberglass-hulled Swan 82 sailing yacht with the carbon-fiber-hulled Swan 80FD, a lighter 80-foot vessel with a flush deck—thus the FD designation. Now for sailors seeking a yacht with a greater emphasis on comfort, Nautor’s Swan has added the 80S to its Maxi collection of high-performance sailing yachts longer than 60 feet.

The 80S is similar in design and construction to the 80FD, but it has a semi-raised saloon. The alteration adds more interior headroom than the flush-deck design, and because of the saloon’s large windows, it also adds natural light belowdecks.

The first 80S, dubbed I Amsterdam, launched in May. The model has a starting price of approximately $6 million and requires 14 to 16 months to complete. Like that of the 80FD, the hull of the 80S is made of carbon fiber, as are the mast, boom, and winches (as an option), making the yacht not only lighter and faster than the 82, but also easier to sail.

The hull’s carbon-fiber construction enables the 80S, in ideal conditions, to travel 10 knots faster downwind and 2 knots faster upwind than the 82, according to Nautor’s Swan commercial director Luca Lucheschi. The rigidity of the carbon fiber allows the winches and blocks to be placed in positions on the deck that are closer to the cockpit. A larger mainsail trimmed by the mainsheet winch and a smaller, nonoverlapping jib make it easier to handle the sails and tack the yacht.

Compared with the 82’s hull, the 80S’s has a wider stern, is narrower at the bow, and has a more vertical stem. The wider aft section provides greater stability and helps the yacht reach a plane more quickly when sailing downwind; the reshaped bow helps it to cut through the water upwind with less resistance. “As a consequence of contemporary materials and design, we can do some things today that we could not do yesterday,” says Lucheschi.

It is possible to sail the 80S with just two people, as the owner of I Amsterdam does. However, the yacht can accommodate as many as four crew members in the forward cabins.

I Amsterdam’s owner, who each of the last six years has traded in his current Nautor’s Swan for a new model, enjoys sailing with his family, which is one of the reasons why the semi-raised saloon model, with its more comfortable space belowdecks, appealed to him. The 80S will accommodate as many as eight guests, depending on the number of crew members and the cabin configuration. The yacht’s interior is available trimmed in oak, teak, or cherry and with joinery and furniture made of a veneered material with spaces hollowed out like those of a honeycomb to keep weight down.

Lucheschi notes that improving the performance capabilities of the company’s yachts and creating high-quality, comfortable interiors for them have been primary goals of Nautor’s Swan since 1998, when it was acquired by a group of investors that included Leonardo Ferragamo, a sailing enthusiast and the son of fashion designer Salvatore Ferragamo. “Leonardo brought energies and a new sense of international style to the brand,” says Lucheschi, “as well as the eye of a man who grew up in fashion.”