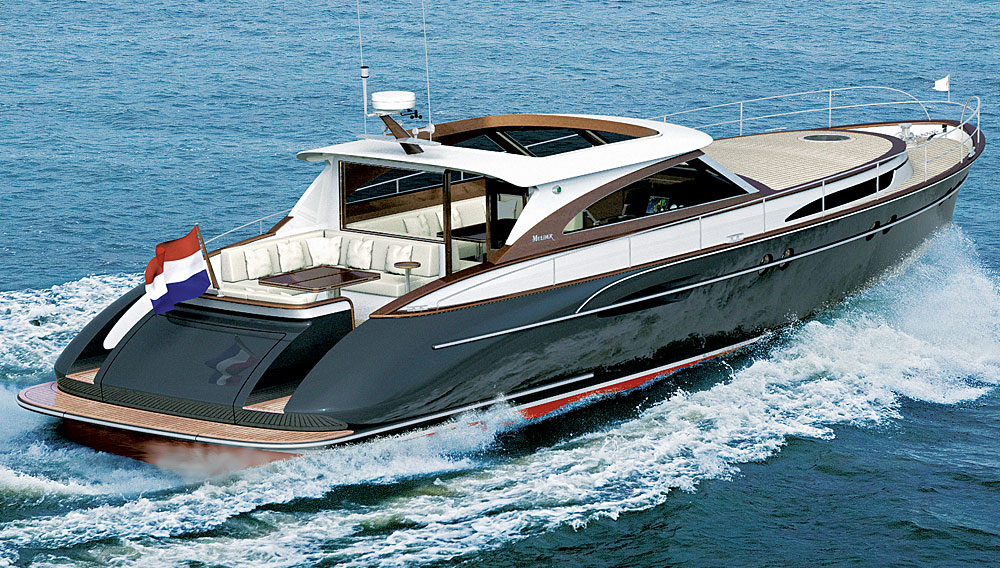 Introduced in the 1950s, the Favorite line of cruisers from Dutch builder Mulder Shipyard still enjoys a cult following. Enthusiasts around the world gather on a regular basis to take to the water in their vintage Favorites, which include the original Favorite Kruiser and the 1960s-era Super Favorite Kruiser. Now, on the heels of its 70th anniversary, Mulder is launching a line of Favorites for the 21st century. “To mark the occasion we decided to breathe new life into the Mulder Favorite,” says company president Dirk Mulder Jr., son of founder Dirk Mulder, who started the company in 1938.

Mulder Shipyard’s longevity owes much to the popularity of its Favorite line, especially the Super Favorite models and the 1980s-era Favorite Superior Kruisers. In the 1990s, Mulder began building a range of custom motor yachts, and today the company focuses on semicustom displacement and planing yachts, specializing in convertible, wheelhouse, and flybridge models in the 48- to 98-foot range. To retain an element of exclusivity for owners of its semicustom boats, Mulder builds a maximum of three of each design.

For its new Favorites, which will not be limited in production, Mulder collaborated with Dutch designer Guido de Groot and naval architecture firm Vripack. The line comprises three models—the 1400 (48 feet long), 1500 (51 feet), and 1600 (54 feet)—all of which share the open wheelhouse and smooth lines of the vintage Favorites. But instead of the steel frame and solid mahogany superstructure the originals had, the modern renditions will be built completely of aluminum.

Each Mulder Favorite is available with either a rounded-bilge or a hard-chine hull, and can be powered by two engines that range from a pair of 150 hp motors to twin 435 hp IPS Volvos. With the rounded-bilge shape, the boats will be able to cruise comfortably from about 10 to 25 knots. With high-powered Volvos and a hard-chine hull, the Favorite 1400 will fly as fast as 35 knots.

Prices for the Mulder Favorites begin at about $980,000 for the 1400, and the company says it can make deliveries in about a year from receiving an order. “The first new Favorites are under construction and expected to be launched at the end of the year,” says Mulder Jr. “There is a lot of response to the designs and pictures, and we are already talking with several new clients.”

First to come out of the shed will be a 1400 with a Volvo IPS600 engine package and a hard-chine hull with spray rails. Also under construction and scheduled for an end-of-year launch is a 1500 with a rounded-bilge hull and a conventional propeller shaft system. Two Volvo D6 engines providing 330 hp each will power the vessel, which will be delivered to one of the biggest Mulder enthusiasts of all: Dirk Mulder Jr. has claimed the boat as his own.