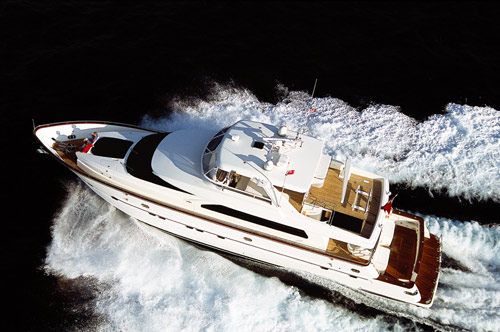 Don Gilman, president of Gilman Yachts, had an ample fleet of Browards, Vikings, and Hatterases on display last February at the Miami International Boat Show. However, there was one particular yacht that he was bursting to show visitors at his crowded slip: the $1.18 million Horizon 62. The new addition to his stable of yachts was unique among the American- and European-built vessels because the Horizon is made in Taiwan.

Horizons, marketed as Elegance yachts in Europe, have been cruising the Mediterranean since 1990, but they have been available Stateside only since 1998. Five years ago, the United States was home to only one Horizon owner. Since then, 35 more have been sold here, and more yachts destined for U.S. shores are under construction. The Horizon 62 is the latest example of how Asian manufacturers, long considered inferior to their competitors in the United States, United Kingdom, and Italy, are shedding their dubious reputations by building better machines. Horizon and China’s Cheoy Lee Shipyards, two of Asia’s largest yacht builders, say their sales and market shares have increased steadily over the last five years, thanks to products such as the 62 and the $1.945 million Cheoy Lee 68. “There’s a very real perception and reality of improved quality,” says Kevin Ralph, marketing and sales director of Cheoy Lee, which builds private as well as commercial vessels. “There’s more attention to detail.”

For example, Cheoy Lee and Horizon both employ resin-infusion molding, a process originally developed by the U.S. Navy, to control precise resin levels and eliminate any air pockets, which often form in hand-laid fiberglass. The method produces smoother and more durable hulls. Additionally, lower labor costs in Asia allow the shipyards to deliver their yachts at more competitive prices. While they save money on labor, the Asian builders do not skimp on equipment; they hire many of the same suppliers that work with American and European builders.

When leading a tour of the 62, Gilman, who is one of Horizon’s two U.S. distributors, points to the yacht’s stylish reverse-rake windshield and flawless wood joinery, and makes certain not to overlook the star feature of the yacht: its master stateroom. Unlike the masters in other Horizons, which are located in the V-shaped bows of the boats, the 62’s is situated mid-yacht, taking advantage of the vessel’s 17-foot-4-inch beam to give the area a roomier feel. An owner can customize the interior of his 62, which usually requires a year for delivery. Several clients have even stretched their yachts to 65 or 68 feet to gain extra space. “What they find attractive is bang for the buck,” Gilman says of his Horizon owners. “They see it as a bigger, higher-quality boat for the same money. They realize immediately that they’re not building a production boat.”