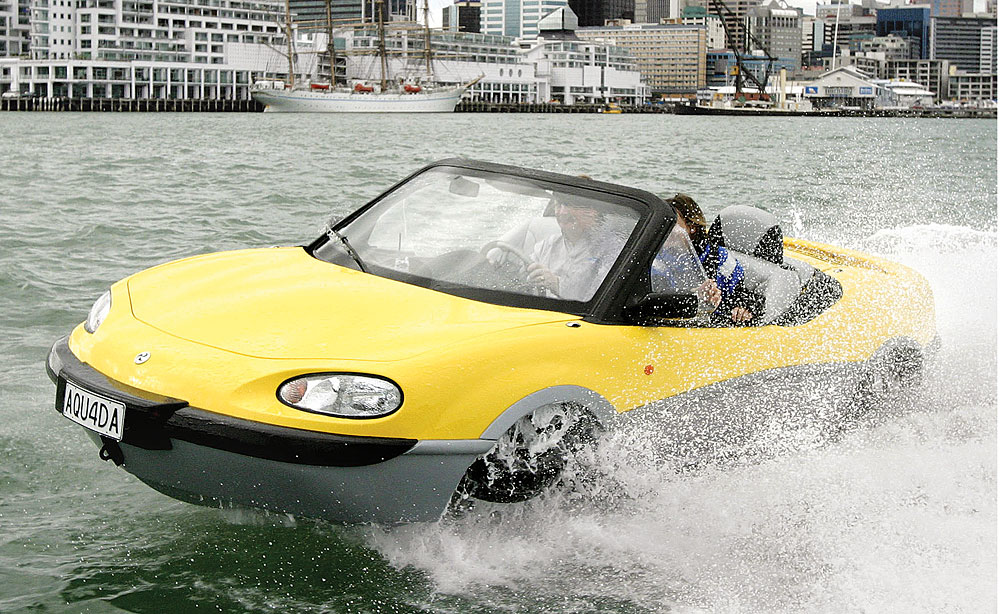 The sports car is heading straight for Michigan’s Orchard Lake. A fellow in his 20s, bending over his dinghy near the boat ramp, glances up and gapes when he sees the car coming his way. The vehicle passes him, barrels down the ramp, and plunges into the lake.

Inside the car, Neil Jenkins presses a blue button on the dashboard, causing a yellow light to blink for five seconds. The blinking stops; Jenkins steps on the gas pedal; and the car travels across the lake toward an island.

Jenkins, a 52-year-old Englishman, grins. “We are now officially a powerboat.”

On land, Jenkins had accelerated the car to faster than 70 mph (it can achieve 110 mph), and now, on deep water, it is planing at about 24 knots (it can reach 30 knots). He works the wheel, and the vehicle turns neatly, producing a sheet of spray. The sports car–cum-powerboat is called the Aquada, and after 12 years of development in the United Kingdom it appears headed for the United States.

Aquatic cars date back more than 100 years. The first recorded motorized amphibian was the Magrelen Amphibium, a three-wheeled vessel built in 1899 in Denmark. In the 1940s, Porsche and Volkswagen collaborated to produce the Schwimmwagen, which reached 50 mph on the road and 5 knots on water. About 20 years later, the Amphicar improved somewhat on the Schwimmwagen’s land speed, but as a boat it did not perform much better than its predecessor. Only recently have amphibious vehicles begun to achieve significant speeds on water. In addition to the Aquada, modern designs include the Hydra Spyder, a production vehicle built in South Carolina, and the Rinspeed Splash, a Swiss made concept car.

The idea for the Aquada originated with Alan Gibbs, a New Zealand diplomat and entrepreneur, whose company, Gibbs Technologies, began building an amphibious car in the 1990s. Jenkins, who had helped create Panavia Aircraft’s Tornado jet fighter, Jaguar’s XJ220 supercar, and other advanced vehicles, merged his British engineering firm Krafthaus with Gibbs Technologies in 1999. Since then, the pair has invested more than $100 million in aquatic vehicle technology, accumulating more than 70 patents along the way.

They initially manufactured the Aquada in the United Kingdom, building about 50 of the vehicles before their engine supplier went out of business in 2005. Taking the crisis as an opportunity, they revised their plans and now are looking to produce the aquatic cars in the United States. They hope to begin deliveries by early 2009, at a price of about $85,000 apiece.

The Aquada will not be their only source of revenue. Jenkins says that the U.S. Department of Defense has shown interest in the amphibian technology and that the company already has designed several military vehicles. It also has created the Quadski, an all-terrain vehicle that converts into a personal watercraft, and hopes to deliver it to customers by early 2010.

At Orchard Lake, about 40 miles west of Detroit, the Aquada draws quite a crowd on this June morning. After the vehicle has returned to land, a sheriff arrives, ostensibly to ensure that no laws are being broken. Soon, however, he expresses a different type of interest in the Aquada.

“That thing would make a hell of a patrol car,” he says. “It sure would be nice if you donated it to us.”