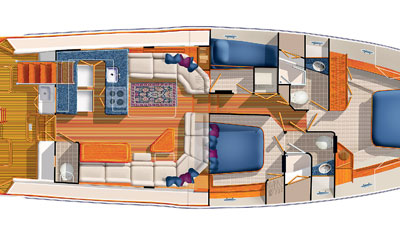 When yacht designer Tom Fexas reminisced about the halcyon days of Wheeler Yacht Co. for Sea magazine in the March 2004 article “Where Were You in ’52?” he provided pharmaceuticals executive Wesley Wheeler with the impetus to revive the business his family had shuttered four decades earlier. “I had thought about doing this for a very long time, expecting that one of the senior Wheelers would do it,” says the 48-year-old Wheeler, now chairman and president of his namesake boat company, which he reformed last fall in Newport Beach, Calif. (Wheeler remains in the pharmaceutical business as well, serving as president of Valeant Pharmaceuticals International.) “But having seen 40 years go by, hearing the stories of greatness all my life, and then reading the Fexas story, I had to make a move.”

One of Wheeler’s initial moves was to recruit Fexas—whose parents once owned Wheelers—to design a new boat. Fexas responded with the 55-foot Legacy Sedan (starting at $2.5 million), which is an updated version of the 48-foot sport fisherman that Wheeler Yacht Co. produced in 1952. The first Legacy Sedan will be delivered in the fall and will feature a lightweight hull constructed of solid fiberglass beneath the chine and cored with vacuum-bagged PVC foam in the topsides. The boat’s stateroom will be spacious enough to accommodate a king-size bed, and a queen-size bed will fit in the guest suite. (A third cabin will sleep one passenger.)

The standard twin Caterpillar C-18 engines will produce 1,015 hp apiece, while each of the C-32s in an optional package will power the Legacy with 1,652 hp. “It has been hull tested to run at 42 knots [36.5 mph] with the C-32 Cat engines, making this the fastest sport fish available today,” says Wheeler.

With either of these power plants, the Legacy Sedan is, of course, far faster than any vessel Wheeler’s great-grandfather, Howard Wheeler, offered when he founded the original company in 1910. By the 1930s, the Wheeler business was producing 15 models of sport fishermen, fast commuters, and express cruisers ranging in length from 22 feet to 47 feet. In 1934, Ernest Hemingway commissioned what would become the most famous Wheeler: a 38-foot sport fisherman he christened Pilar, which now resides in a Havana, Cuba, museum. In the postwar era, Wheeler evolved into a style-maker, producing such sleek designs as the Sunlounge picnic boat and the Promenade pleasure boat before financial strains led to the company’s demise in 1965.

Wheeler has reemerged 40 years later with the Legacy Sedan, the first of three new Wheeler models slated to use Fexas’ hull; modern versions of the Sunlounge and Promenade designs will soon join the lineup. All will be built by Bennett Brothers Yachts, a shipyard in Wilmington, N.C. Wheeler also plans to offer custom boats. “I have 15 years of catalogs from the ’40s and ’50s,” he says. “I would like to show them to customers and ask them which one they would like.”