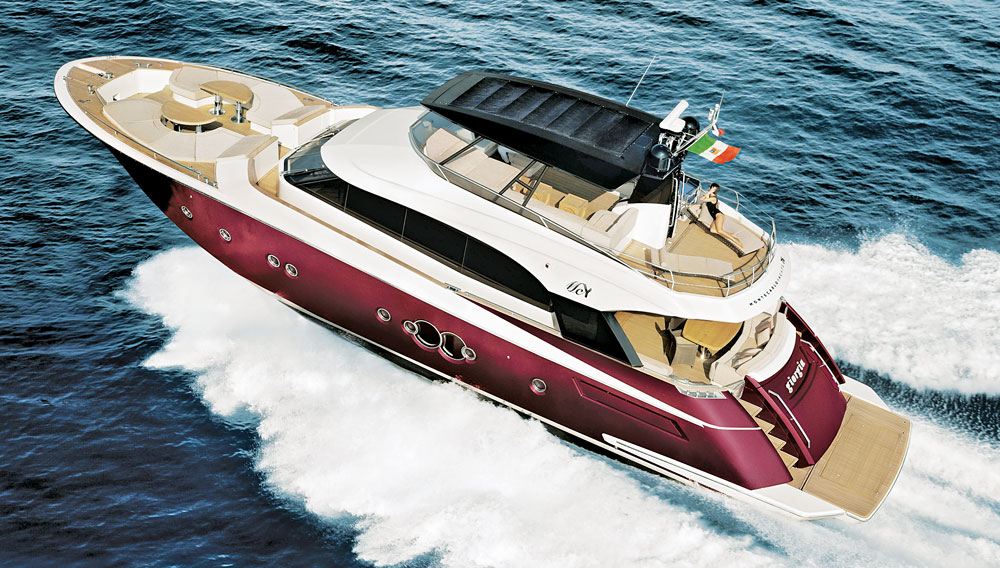 Over the years, the American kitchen has become a space for socializing as much as it is a place for cooking. Homes throughout the United States often feature large, open-plan kitchens with ample seating and plenty of room for congregating. So it seems only natural that an American yacht owner would want his or her onboard kitchen to serve a similar function. For Monte Carlo Yachts, which recently redesigned its MCY 76 for the American market, understanding such regional preferences is a key ingredient to success.

“When doing business in a global market, boatbuilders try to incorporate in the design of a new boat the widest possible range of experiences of the different markets,” says Carla Demaria, president of the 2-year-old Italian shipyard. “But the ‘world boat’—able to satisfy at the same time European, American, Chinese, and Brazilian clients—simply does not exist, as the different cultures lead to different habits.”

French parent company Beneteau Group, which specializes in sailboats and powerboats up to 60 feet, launched Monte Carlo Yachts in 2010 as a builder of 60-foot-plus flybridge and open luxury vessels. The MCY 76 is the inaugural model from the brand, which debuted a 65-footer at the Cannes International Boat & Yacht Show last September.

To help create a boat more conducive to social interaction, Monte Carlo placed the kitchen of the American MCY 76 on the main deck (instead of out of sight and mind on the lower deck, where it is found on the European version of the boat). The 76-foot boat, which made its U.S. debut in February, also features side-boarding doors for mooring alongside the dock (as opposed to stern-to docking) and upgraded air conditioning for tropical climates.

The MCY 76’s kitchen shares the main deck with a dining area, the main salon, and the cockpit. The light, open space—marked by multiple windows and a contemporary decor—can be entered from a fully opening aft-deck door.

The aft deck itself includes both covered and open dining and lounging spaces, as well as a large swim platform that offers easy access to the sea. Sunseekers will appreciate the tanning and cocktail-hour areas on the forward deck and the flybridge, where a retractable sunroof and secondary helm allow for piloting under shade or open sky.

Belowdecks, clients have the choice of a three- or four-cabin configuration, each with en suite bathrooms. In both layout options, the master stateroom sits amidships.

Priced from $3.8 million, the MCY 76—which features a sleek Nuvolari-Lenard design and a resin-infused, Kevlar-reinforced hull—can cruise as fast as 26 knots. All of the action in the cockpit is visible from the main salon and the kitchen, the latter of which is one of the largest examples in its class. For passengers of the MCY 76, either space serves as an ideal spot to gather and enjoy the ride.