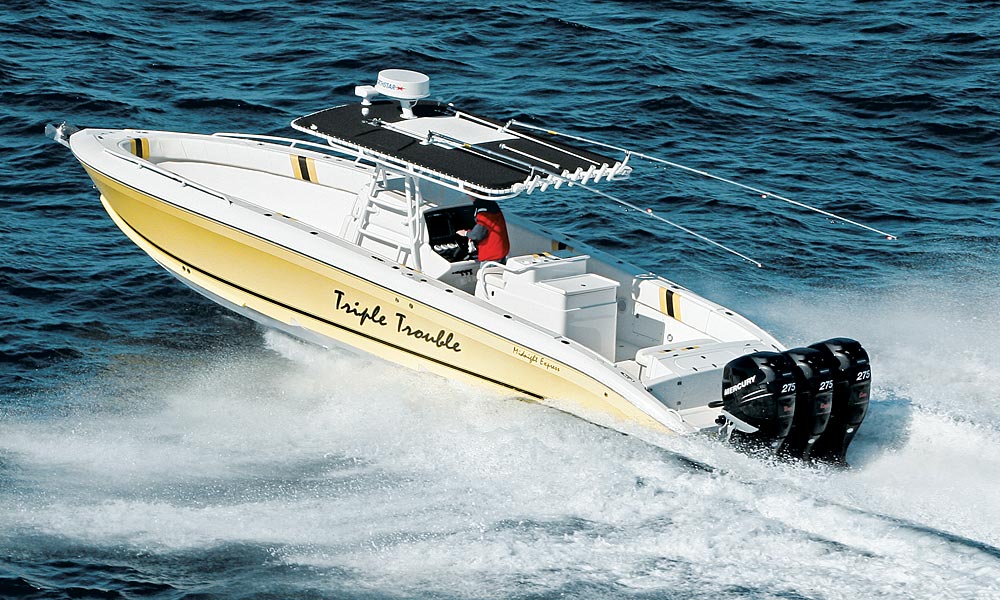 It was only a matter of weeks before Dale Maloney discovered that his Midnight Express 37 Open Fish lived up to its hard-charging pedigree. Maloney, by his own admission a sportfishing fanatic, had taken delivery of his 900 hp, outboard-powered Shutter Up last April.

Several weeks later, Maloney and five teammates faced tangled seas in a sportfishing tournament off the coast of South Florida. “We were in 8-foot waves, and it was bad out there—rough,” Maloney says. “We really put the boat to the test. The second day was as nasty as the first. But we let it rip in the big chop. My buddy commented, if the boat were going to get any stress cracks, now would be the time.” But the hand-laid fiberglass hull returned to the dock with hardly a blemish, and, more important for Maloney, its boxes were brimming with kingfish. “We didn’t win the tournament,” Maloney says, “but it was a great opportunity to test the boat in real-world conditions.”

The Midnight Express 37 Open Fish and its cuddy version, the 37 Cabin, represent the latest designs from Midnight Express. “Our hull shapes are unique and really define our boats,” says Bert Glaser, president of the Fort Lauderdale, Fla.–based company. “We’ve designed our 37-foot hulls to perform as well as a 50-foot battlewagon in rough water. You will get where you need to go, fast. It’s not like the big boats, where it feels like you’re driving a condominium.” The Midnight Express 37, with three outboard engines, starts at $290,000.

Maloney, who purchased his first Midnight Express in 1993, opted for the new 37 Open Fish because of the speed that is required in sportfishing tournaments, where competitors may run to a prime fishing spot as far as 70 miles offshore and then back again for weigh-in. “I load it down with 2,000 pounds of ice and water, and we still get 61 mph,” he says.

According to Glaser, the new boats will reach 65 mph with triple outboards (with quads, the speed rises to 75 mph), and they are built to withstand high velocity. “Our boats incorporate the highest-grade materials, including vinyl ester and isophthalic resins,” he says. “They are also built tough.”

Midnight Express considers each boat a semicustom project, and owners provide significant input into the final design of their vessels. Maloney opted to turn his 37 into the ultimate fishing machine. The fact that Maloney has been a Midnight Express owner for 15 years does not surprise Glaser: “We tend to get customers for life,” he says.

Shutter Up is now a recognized name on the sportfishing circuit, and Maloney has placed in a couple of tournaments this year. “When you’re fishing in a competition, you need to run the boat hard, but still trust it,” Maloney says. “That’s what I like about this boat—you can go balls to the wall and know you’ll get home safe.”