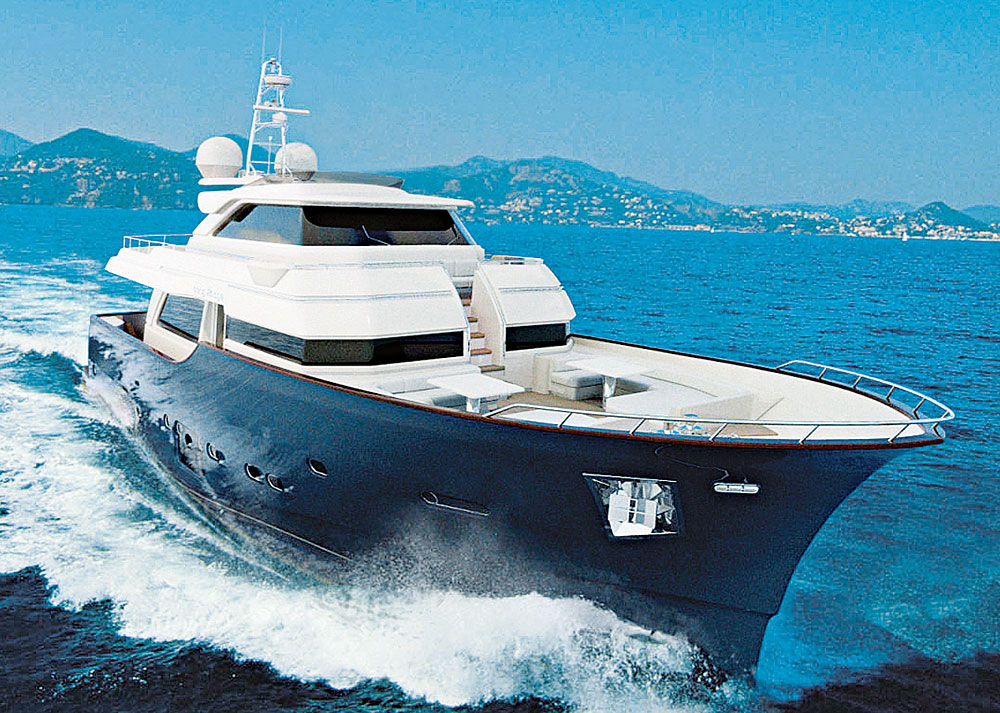 With the exception of a handful of superyachts that use experimental eco-friendly propulsion systems, vessels employing green technologies have been rarities in the industry. However, Mochi Craft, a division of Ferretti Group famous for its delightfully eclectic line of lobster boat–style yachts, hopes to change that. At the Genoa International Boat Show in October, the company debuted the Long Range 23, a 75-foot expedition craft that features a new hybrid propulsion system and an advanced hull design that combine to save fuel and reduce emissions.

According to Andrea Frabetti, vice president for Ferretti’s Advanced Yacht Technology department, the Zero Emissions Mode (ZEM) hybrid technology in the Long Range 23 has four emissions-saving propulsion options that are controlled by a touchscreen panel on the helm station. The Diesel Propulsion and Energy Storing mode utilizes the yacht’s twin MAN diesels while simultaneously charging a battery pack. In diesel-electric mode, diesel generators and the battery pack power electric motors that propel the boat for up to four hours at a speed of 6 knots. With ZEM propulsion, which means battery power only and no emissions, the boat can maintain a speed of 5 knots for three hours. In mode four, called ZEM function, a battery pack runs air-conditioning, the entertainment system, and other functions while the vessel is stationary.

The Registro Italiano Navale, Italy’s marine technical certification association, was so impressed with this emissions system that it awarded Green Star Clean Energy and Clean Propulsion certification to the Long Range 23, citing the craft’s minimal environmental impact; it was the first such certification given to a motor yacht.

Another technological advance employed in the 23 is a hull design known as Ferretti Wave Efficient Yacht, or FER.WEY. “At about 8 knots, this hull reduces resistance by up to 28 percent compared to traditional hulls of the same weight and size,” Frabetti says.

As the 23 gains speed, instead of plowing, like most hulls do, the stern remains level with the rest of the boat. Because there is less resistance, the ship requires less power and consequently uses less fuel. Frabetti notes that FER.WEY’s running surface provides maximum hull efficiency at 8 to 10 knots. A Mitsubishi Anti-Rolling Gyro system also reduces the 23’s roll by up to 50 percent.

Since acquiring Mochi Craft in 2001, Ferretti Group has reinvigorated the brand, which had become listless and conventional. With the introduction of the Long Range 23, the Italian shipbuilding giant is outlining the next chapter for Mochi Craft and simultaneously presenting a technological challenge to its competitors. “A few years ago, we reinterpreted the old-style lobster boats with the goal of turning them into stylish cult objects,” says Marco Segato, Mochi Craft’s vice president of sales. “Now we’re doing the same with expedition boats by using our zero-emissions propulsion and hull design.”