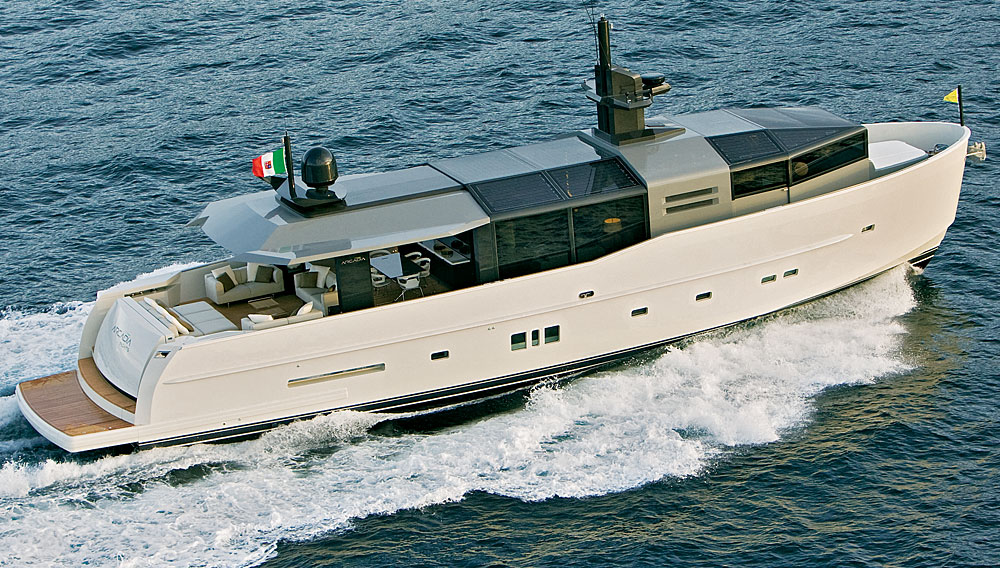 Arcadia Yachts arrived at the Düsseldorf International Boat Show in January hoping to draw attention to the new Arcadia 85′. It didn’t take long for the shipyard’s presence to pay off: The second hull from the nascent builder’s 85-foot line sold within 12 minutes of the show’s opening.

A subsidiary of the Italian industrial group Tre-Ti, Arcadia has indeed found quick success. The shipyard, which is based in Torre Annunziata, Italy, launched its inaugural boat—the first Arcadia 85’—last August. Arcadia’s goal is to build 75- to 135-foot-long yachts that are as eco-friendly as possible but still afford the high levels of style and comfort for which Italian boats are known.

The first of three planned models from Arcadia, the 85′ features a daring exterior design paired with a quintessentially Italian minimalist decor. Penned by Italy’s Guida Design + Engineering, the white-hulled yacht is lined with dark, double-glazed windows that house solar panels capable of generating 4 kilowatts of electricity from bright sunshine. The sun-derived power is enough to support the bulk of the boat’s onboard electrical requirements during the day.

The 85’’s windows also provide thermal insulation inside the boat while treating guests to panoramic views from almost anywhere on the main deck. Thanks to the bank of panes and ample headroom, the main deck has an open feel, offering a smooth transition from the shaded lounge area aft to the main salon (which features furnishings from Poltrona Frau). Steps from the main salon is the dining room, with seating for eight, followed by the galley and wheelhouse, both of which are situated farther forward than is common on yachts this size.

In contrast to the open and airy spaces on the main deck, the 85’’s four staterooms (the boat is offered with an optional fifth stateroom) are intimate and cozy, with contemporary furnishings and low lighting. (The boat also incorporates two double crew cabins in the bow.) Outdoor areas include the main deck’s forepeak and a small sunning space aft, just past the radar arch, beyond which is the yacht’s swim platform.

The 85′ runs on two MAN R6 730 hp diesel engines that power the fuel-efficient semi-planing hull to a top speed of 18 knots. An optional hybrid propulsion system allows for cruising at 8 knots without engine noise.

On the heels of its 85′ line, Arcadia will launch a 115-foot model next spring, followed eventually by a 135-footer. In the meantime, the third and fourth 85′ yachts are being delivered this summer and winter, respectively. The boat is priced at about $4.5 million and, like Arcadia’s early success, delivers quickly: A new 85′ can be completed as soon as four months after an order is placed.