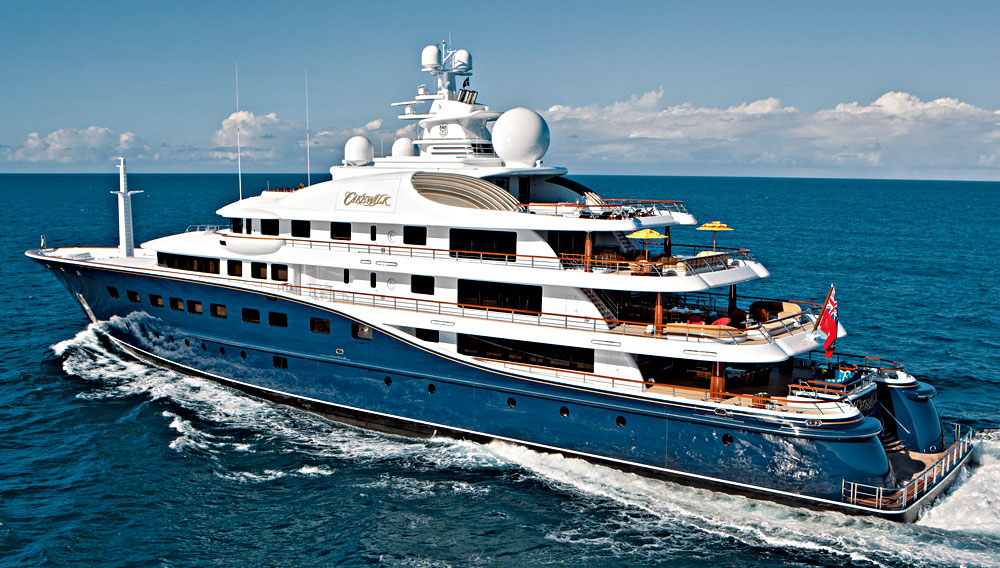 With its launch of Cakewalk last August, Derecktor Shipyards set the record for the largest U.S.-built yacht by volume. At 281 feet, the six-deck motor yacht—which displaces an astonishing 2,998 gross tons of water—is also the longest American-made yacht since J.P. Morgan Jr.’s 343-foot steamer Corsair IV in 1931. The substantial superyacht represents a significant step for the New York–based yard—and for American builders in general. “We’ve shown that a U.S. company can build a boat to international standards,” says CEO Paul Derecktor. “And, as my dad used to say, the product speaks for itself.”

Derecktor’s father, Robert, founded the company in 1947 in Mamaroneck, N.Y. In the decades since, the yard has built America’s Cup–winning sailboats, as well as numerous custom motor yachts and commercial vessels. But Cakewalk, which was constructed at the company’s facility in Bridgeport, Conn., sets a new standard not only for size but also for the intricacy of its design and personal touches.

Cakewalk’s mammoth exterior—marked by a sapphire-blue paint job and a curvy horizontal line that runs bow to stern—and interior layout are the work of English firm Tim Heywood Designs. Florida-based designer Elizabeth Dalton, who has worked with the yacht’s owners on several residential and maritime projects, conceived the interior design of the spaces, which Derecktor’s in-house craftsmen completed. Cakewalk’s highlights include custom octopus faucet handles in the sundeck day head, a Tibetan rug woven specifically for the main deck, and a stunning spiral staircase with wrought iron balustrades that reaches four decks (which are also linked by an elevator).

Cakewalk’s staterooms are also standouts. Where most superyachts house guests on a lower level, Cakewalk accommodates 12 of its passengers in six staterooms on the main deck. One level up, on the owner’s deck, a lavish master suite comprises seven distinct rooms that include the stateroom, his and her dressing rooms, his and her bathrooms (each with its own whirlpool), a lounge, and a gym.

On its lower levels and bridge, Cakewalk accommodates 24 crew in 16 berths. The yacht’s size also affords space for several entertainment, recreation, and lounging areas, including a cinema, a library with a marble fireplace, a day spa and exercise room, a huge top-deck hot tub, and—the owners’ impetus for the grandiose yacht—a huge tender garage.

The tender garage, which stores a limited-edition Aquariva Cento cruiser, a custom Intrepid 350 open sportfisher, and several other toys, opens via eye-catching gullwing doors on either side of the hull. Like Cakewalk’s record-breaking size, the doors seem intended to make a statement. “Now that the industry has seen Cakewalk,” says Derecktor, “I think clients will think twice about going to Europe.”