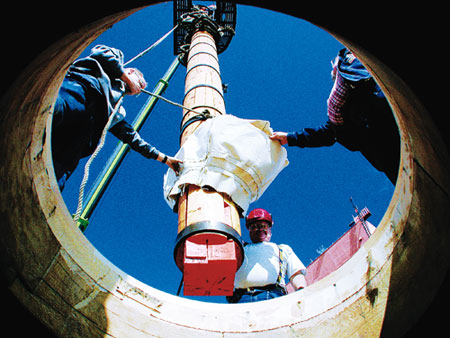 In 1984, divers from the Swedish Underwater Archaeology Society made a groundbreaking discovery. They found the wreck of Götheborg, an 18th-century Swedish trading ship. The 150-foot wooden merchant vessel, known as an East Indiaman for its trade route, was commissioned by the Swedish East India Co. for voyages to China. On September 12, 1745, upon returning to its home port of Göteborg, Götheborg and its cargo of tea, spices, porcelain, and silk sank to the bottom of the harbor.

During one of the excavation dives, Joakim Severinson, a diver on the salvage team, wondered how the vessel had survived a two-year journey, only to sink within sight of its destination. If all goes well next fall, the cause of the ship’s demise will remain a mystery. Under Severinson’s command as master shipwright, a new Götheborg, a $30 million re-creation of the original, was launched last June. The Swedish East India Co., which shuttered in 1813, was revived for the sole intention of designing and building the re-creation, which will retrace its namesake’s journey from Sweden to China in October 2004—this time, Severinson hopes, without sinking.

Building Götheborg, the world’s largest ocean-rated wooden sailing boat, began as Severinson’s pet project. It has since blossomed into a 10-year, 100-craftsman affair that has captured the attention of Swedish royals and become a source of national pride. While the ship’s objective is to complete its predecessor’s round-trip voyage to China, it will also serve as a research vessel and a platform for teaching 18th-century sailing technology to nautical students.

The Götheborg team remained as faithful to its ancestor’s design as possible. Although sketches of the original tall ship never existed, the crew built the square-rigger’s hull and decks to an approximation of the original design. They used historically accurate materials such as pine and oak for the hull and 2,000 square meters of hand-stitched linen for the sails. Including the bowsprit, Götheborg measures 193 feet, slightly larger than the original.

In the 1700s, the Swedish East India Co. assumed that one in five crew members would perish from sickness or accident on each voyage, so it hired a crew of 120 for Götheborg. Needless to say, today’s Götheborg expects each of its 80 crew members to survive the journey.

The first Götheborg’s ultimate nemesis was a well-charted rock just outside its home port. Today, some speculate that the sinking was not an accident but a case of insurance fraud. Others point to a tipsy skipper; the East Indiaman was carrying 8,000 liters of schnapps. “One theory says the captain sailed onto the rock thinking it was mud,” says Severinson. “The usual way to unload her cargo was to sail onto mud, then unload a bit, then sail onto some more mud. Luckily, things have moved on a bit since then.”