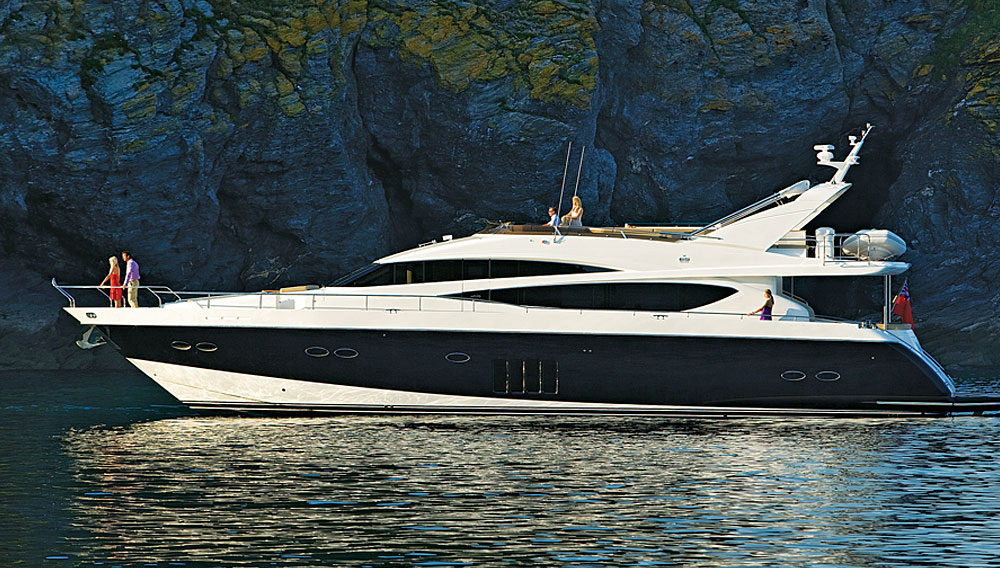 LVMH’s impressive stable of luxury brands includes, among others, fashion labels Louis Vuitton and Givenchy; Champagne houses Moët & Chandon and Veuve Clicquot; and the Royal Van Lent shipyard, which produces Fead­ship megayachts. In 2008, the Paris-based conglomerate expanded its maritime presence with the purchase of Princess Yachts, a reputable British builder that is now enjoying a swell of support.

Since its acquisition by LVMH, Princess has broached the large-yacht arena—the company debuted a 105-foot model earlier this year—but the 46-year-old yard’s expertise lies in its range of smaller, semicustom production boats. At last October’s Fort Lauderdale International Boat Show, Princess unveiled four such models—the 42, V52, V62, and 85 Motor Yacht (each named for their length in feet)—for the American market. Each of the new boats showcases the clean profiles, roomy interiors, deep-V hulls, and large, sweeping windows that have helped Princess rise to prominence in Europe.

Princess vessels have been available in North and Central America and the Caribbean for years, but they were branded as Viking Sport Cruisers. (The Viking Sport Cruisers company continues to manage sales, distribution, and service for Princess in the Americas.) These four new models are the first to bear Princess’ crowned insignia in Western waters, and they are at the forefront of the builder’s efforts—and ultimately those of LVMH—to popularize the brand on this side of the pond.

The biggest and best of the quartet is the 85 Motor Yacht, which Princess designed with entertainment in mind. The builder can arrange the 85’s capacious main salon, which features windows running the length of the space, in several configurations that are conducive to socializing. A highly functional flybridge affords ample space for sitting, dining, and sunning, and offers an optional hot tub aft.

Princess’ V62 forgoes a flybridge for a wave-cutting deep-V hull with a 21-degree dead rise at the transom. Still, the speedy, sport-style yacht has a spacious feel, thanks to a retractable sunroof above the pilothouse and Princess’ heirloom vertical portholes that bathe the areas belowdecks in light.

Like the V62, the V52 is a sporty yacht that appears much roomier than it is. The smallest of the new launches, and of the yard’s flybridge models, is the Princess 42, which also makes wise use of its interior space. The boat offers two elegant en-suite staterooms that can accommodate a total of four guests. The flybridge provides significant exterior space, making the yacht an ideal vessel for a family of four to command without a crew.

At press time, Princess was scheduled to debut additional new models at the Miami International Boat Show in February. Rumors suggest that the yard will also unveil the first hull in its 130-foot series by year’s end, adding yet another jewel to Princess’—and LVMH’s—crown.