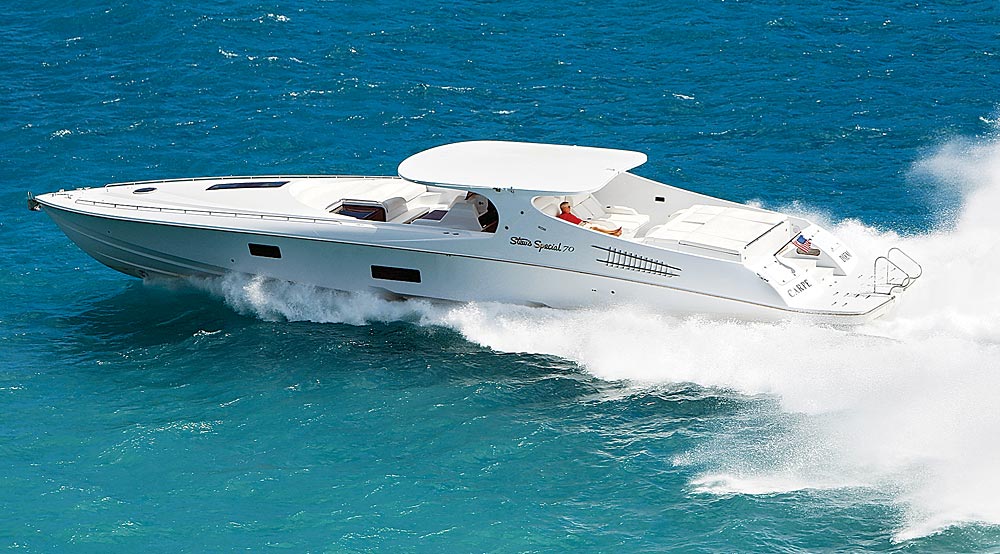 During family gatherings at his hilltop vacation home on the Caribbean island of Saint Martin, Stew Leonard, a 78-year-old Connecticut businessman, likes to take his guests boating. With four children and 13 grandchildren who, with assorted spouses, form a tribe of 23, Leonard needs a yacht to accommodate everyone. But large yachts have one drawback: They move slowly. When Leonard is on the water, he likes to drive fast. So in the late 1990s, he began looking for a 70-foot yacht that would reach speeds of 70 mph or more. Unfortunately, no such boat existed—at least not yet.

On a windy morning last February, Leonard stood at the helm of Carpe Diem, a slender, open-topped, fiberglass-?composite craft propelled by twin 1,825 hp Caterpillar diesel engines with Arneson Surface Drives. Once he reached open sea, Leonard pressed the throttle forward. Within 30 seconds, the boat rocketed to 70 mph, then 75, then 78—but it still moved smoothly through the 2-foot waves. Leonard laughed and pointed to the island of Anguilla, about seven miles away. “I can go there for lunch in 10 minutes,” he said.

Leonard, developer of the Stew Leonard’s dairy store chain in Connecticut and New York, has owned several boats since he came to Saint Martin in the 1980s. The last was a 50-foot Magnum. “When it was time to move up,” he says, “I listed the things I wanted: a spacious deck, bow and stern thrusters for maneuverability, and plenty of seats in the helm, because that’s where people want to be.” Along with a bunkroom for the grandkids, a galley, and a salon that also serves as a sleeping area, he wanted a master bath with a large shower where he could wash off the salt after a swim.

In 2005, Leonard met John Cosker, the founder of a company in DeLand, Fla., called Mystic Powerboats. Cosker, who made a name building offshore powerboats, was fascinated by Leonard’s idea for a personal craft. Now 40 years old, Cosker began his career working for the best powerboat designers in the business, including Fabio Buzzi, whose boats have won 56 world speed records. With Carpe Diem, Cosker has achieved the seemingly impossible: The boat rides cleanly at high speed. “It’s the hull,” he says. “It has two steps cut into it, which add lift, and an extremely deep V shape, which slices through waves. I’ve been working on the design for years.”

Cosker is using Carpe Diem as a model for two series of semicustom yachts: a $3 million, 60-foot version called the M6000 and a $4.62 million 70-footer called the SL700. It remains to be seen if he will incorporate some of the more memorable innovations that Leonard dreamed up for Carpe Diem: the carbon-fiber roof that doubles as a diving platform, the hydraulically operated boarding steps, or the large, electrically adjustable chaise longues behind the helm. “At one point, Stew also asked me to make ‘Thus Spake Zarathustra,’ the theme song in 2001: A Space Odyssey, play on his boat’s sound system whenever he raises or lowers the windshield,” Cosker reports. “Somehow I have a feeling that won’t make it into the production craft.”