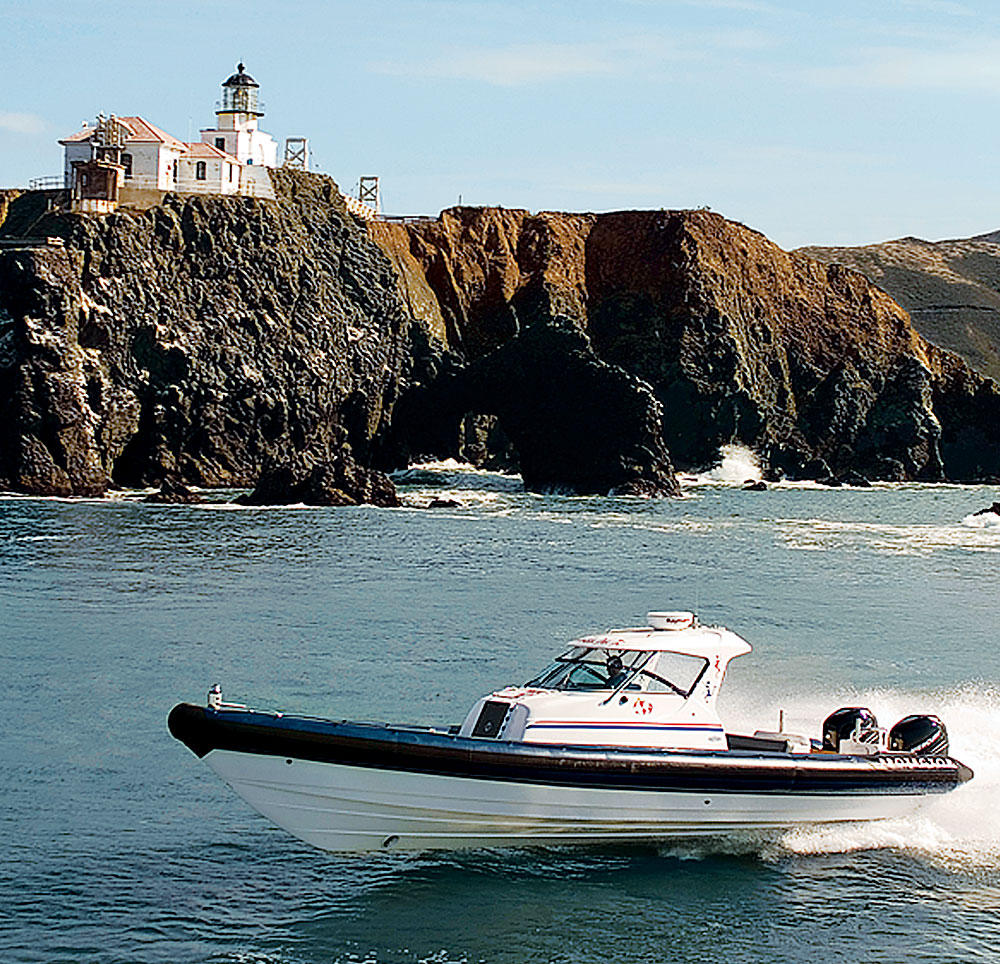 Boaters who ply the Northeast’s waters have a healthy respect for Buzzards Bay, a 28-by-8-mile inlet between the Massachusetts mainland and Martha’s Vineyard. The bay is notorious for its nasty waves, which often come from every direction and with no perceivable rhythm. On bad days, Buzzards Bay can wreak havoc on a watercraft.

On a mid-September afternoon this year, the waves regularly are reaching 10 feet. Most boats slow to about 5 mph in seas like this, if they venture out at all, but at the moment a craft is crossing the bay at about 20 mph. This vessel, called a Protector, is a variant of a rigid inflatable boat (RIB), with a sportfishing craft’s V-shaped fiberglass hull and a sturdy, air-filled tube called a collar ringing the deck. The collar absorbs the shocks from the waves, improves the boat’s stability, and protects its occupants from spray. And if the vessel ever does founder, the air in the collar will make it less likely to sink.

In 1999, commercial banker Howard Shiebler was watching a sailboat race on television when some vessels following the racers caught his eye. These were chase boats, carrying race officials and extra sails. Shiebler learned that the craft were called Protectors and that they were built by the New Zealand company Rayglass Boats, which sold them mainly to that country’s coast guard as search and rescue vessels.

Shiebler ordered a Protector and took it out on San Francisco Bay, which can be at least as rough as Buzzards Bay. “I was astonished,” he says. “This boat could handle anything you threw at it. And on flat water, it reached 60 mph. I wondered why boats like this weren’t well known in the United States.”

In 2000, Shiebler began ordering Protector hulls from Rayglass and finishing the boats in Alameda, Calif. His company, Protector USA, now offers a number of versions of the vessel, including a center-console craft in 22-, 25-, and 28-foot lengths. More popular is a version with an enclosed cockpit called the Targa. The cockpit keeps the boat’s occupants dry in any weather, and a space belowdecks bunks two. The company offers a 28-foot Targa and a 35-footer, the model that on this day is defeating the waves on Buzzards Bay.

“We have all kinds of customers,” Shiebler says. “We sell a lot of these boats to the sailboat racing community. Yachtsmen use them as tenders. They make nice day boats. Men like the boats’ ruggedness, while their wives like the safety.” He notes that in December, the company will announce plans to offer a 36-foot Targa, which will have a larger cabin and a stand-up head and shower, making the boat more suitable for overnight trips. The Targa 36 will have a beginning price of about $305,000, compared to about $275,000 for the 35 and $150,000 for the 28.

As for the Targa 35 on Buzzards Bay, it soon reaches its destination: Newport, R.I., where the Newport International Boat Show will open the following day. Not surprisingly, the 35 does not encounter many other boat-show vessels along the way. Most are being trucked in.