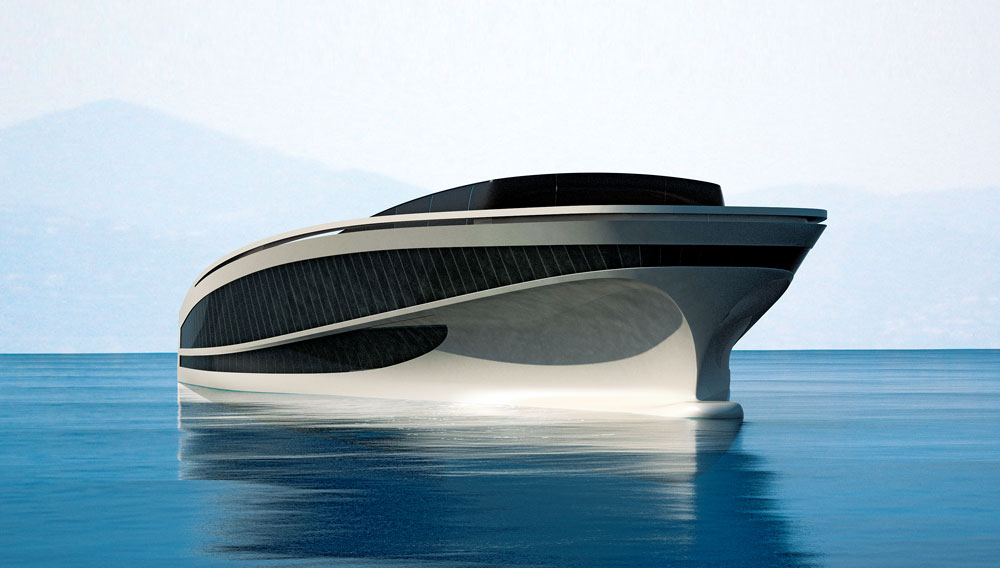 Luca Bassani, president, CEO, and founder of Wally Yachts, insists that his latest project is not a yacht at all. “It’s a floating island,” he says while unveiling a 190-foot-long, 125-foot-wide wooden mock-up of the vessel at Wally’s shipyard in Ancona, Italy.

Bassani’s description seems appropriate given the vessel’s considerable girth, which will prevent it from fitting into most marina berths. This would prove problematic for a typical yacht, but Bassani’s proposed craft—which he claims will be able to make four Atlantic crossings without needing maintenance that would require it to be moored to land—is anything but typical. “We’re creating a new way of living at sea,” he says of his Monaco-based company’s venture with Parisian fashion house Hermès to develop the approximately $150 million WHY 58×38.

The idea behind WHY 58×38—an acronym for Wally Hermès Yachts plus the vessel’s dimensions in meters—arose during a conversation between Bassani and Hermès creative director Pierre-Alexis Dumas at the 2007 Monaco Yacht Show. Bassani initially was seeking to have Hermès accessorize one of his boats, but after speaking with Dumas, he decided an equal collaboration would be more conducive to exploring new territories in yacht design.

Two years after their first meeting—and just hours after the unveiling of their mock-up in Italy—Dumas and Bassani returned to the Monaco Yacht Show last September and had the industry abuzz over their collaboration’s outlandish results. “My inspiration was the Greek caïque,” says Dumas, referring to the wooden skiffs used in ancient times as transport across the Bosporus Strait.

Dumas’ first priority in designing WHY 58×38 was to produce a highly stable, slow-moving boat with ample space to encourage life at sea. “However,” he says, “I was also adamant that we make this as fuel-efficient as possible and that we utilize all types of energy.”

With those goals in mind, Dumas and Bassani incorporated retractable photovoltaic panels atop the vessel’s third-deck roof. Spanning an area of nearly 10,000 square feet, the panels will be able to power virtually all of WHY 58×38’s auxiliary systems. The company is also testing a retractable mast with a computer-operated sail that, in addition to acting as an alternative method of propulsion to the diesel-electric engines, would harness wind energy to generate supplemental electricity. According to Dumas, such measures will help WHY 58×38 save approximately 160 tons of diesel fuel per year.

Of course, the most distinct feature of WHY 58×38 is its triangular-shaped hull, which Dumas based on those of seismological-research vessels. The shape not only aids in the reduction of energy consumption by absorbing wave turbulence at the bow, but also allows for an unusually spacious interior, with room for as many as 12 guests and 20 crew members across three levels.

The proposed design for WHY 58×38—which Wally Hermès Yachts says it could deliver in three years once the company receives its first order—includes such amenities as a lower-level hammam spa and an 82-foot-long top-deck lap pool that follows the contour of the bow. The top deck also incorporates a helipad, allowing for easy hops to and from the “island” during long stints at sea.