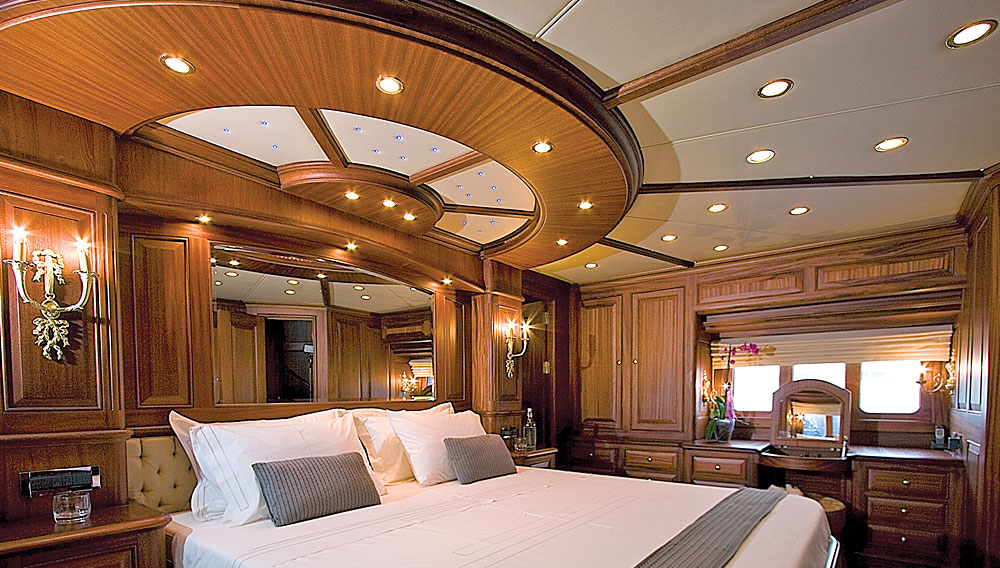 Noah’s Ark, arguably the world’s first expedition yacht, was built in Turkey. Yet despite this august heritage, the Turks have never been known as master shipbuilders. That could soon change: Vicem Yachts, a Turkish builder of modern mahogany cruisers and convertibles, recently debuted its new 92 Cruiser in the United States to broad acclaim.

With this boat, which Vicem unveiled at February’s Yacht and Brokerage Show in Miami Beach, Fla., the company hopes to crack the U.S. market for larger yachts. “We’re all about lifestyle and handcrafted elegance,” says Michael Landsberg, president of Vicem USA. “We want to attract someone who appreciates our craftsmanship and wants a distinctive boat. That might be an older couple, or it might be a younger person with a more mature soul. Either way, they don’t want to be lined up with one fiberglass boat after another.”

Unlike GarWood or Hacker-Craft—mahogany runabout brands that embrace a 1930s look—Vicem offers a more contemporary, New England style favored by fiberglass-boat manufacturers such as Grand Banks, Sabreline, and Hinckley. Indeed, with its lean, taut lines, the $4.9 million 92 looks like it could have been popped from a fiberglass mold—but it wasn’t. The company crafts its hulls by hand, devoting 67,500 man-hours to the building of each 92.

Vicem outfits its interiors with near-flawless mahogany that covers the floors, walls, and finishes to breathtaking effect, setting itself apart from its fiberglass-boat competitors. In fact, exquisite interiors are a trademark of the brand. “We intentionally overbuild everything,” Landsberg says, pointing to the solid-mahogany stateroom doors. Vicem craftsmen also incorporate nautical details in the wood, such as square notches carved into a customized chart holder, or a large compass set within the floor. The exterior decks, including those in the rear cockpit and flybridge areas, are teak.

The brand’s founder, Sebahattin Hafizoglu, began constructing motor sailers for the Turkish market in the late 1980s at a shipyard in Istanbul. Shortly thereafter, he started producing high-end mahogany yachts specifically for the U.S. and European markets, where, to date, his company has sold approximately 80 boats that are more than 50 feet long. Prior to the launch of the 92 Cruiser, Vicem yachts were on the smaller side, ranging in length from 44 feet to 85 feet. “We designed the V72 Classic as a coastal cruiser, one that you could spend a weekend on,” Landsberg says. “But it’s essentially a big, open day boat. The new 92 is a motor yacht—one that passengers can live aboard for weeks at a time.

“I’ve owned three Vicems and have more than 1,000 hours of cruising experience,” Landsberg continues. “We knew what features boaters wanted in a live-aboard cruiser. We’ve also designed the space for a crew of four, but kept those quarters separate for the owners’ privacy.”

Certain features remain constant in the 92, but customers do make many decisions about detail and design. “There’s no mold dictating everything, so we can make modifications easily,” Landsberg says. “We’ve sold many boats of the same model, but no two have ever been the same.”