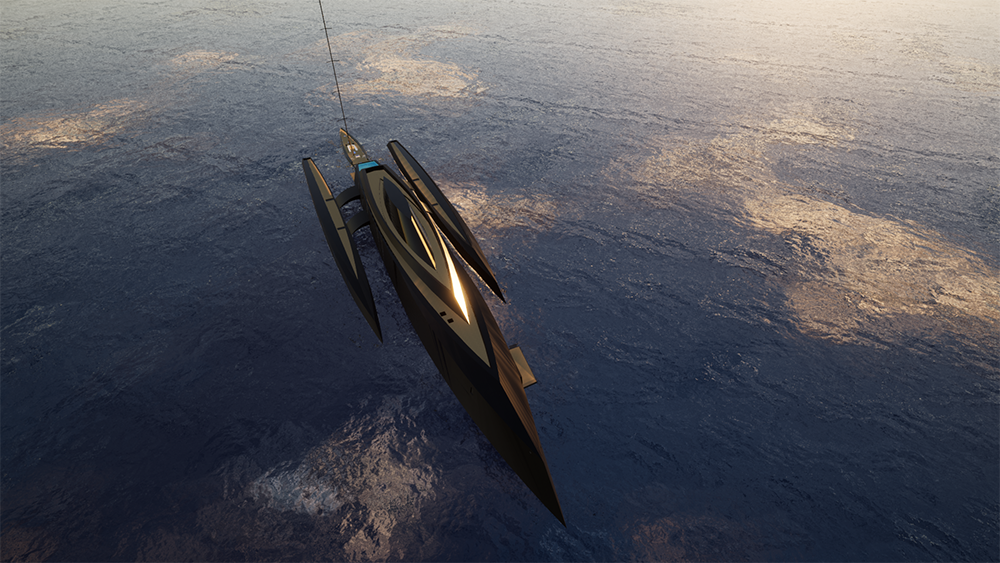 James Bond may have a potential new love interest on the high seas.

Spanning 252 feet from tip to tail, the striking multihull is characterized by powerful, angular lines similar to a spaceship’s. Of course, like all leading ladies, she delivers on more than just looks. The designers say Bond Girl is stealthy by design to ensure she’s harder to detect while carrying out secret missions. She’s also equipped with a hybrid propulsion system to reduce emissions while traveling the globe.

Bond Girl has a private dock and infinity pool to the aft.  Hannah Hombergen and George Lucian

Despite her unconventional exterior, Bond Girl is still very much a luxury yacht. Lucian told Robb Report she has all the features and amenities one would expect on a superyacht of this size. The upscale interior was inspired by Hollywood movies and appears to have a suitable amount of glitz and glamour as per the renders.

The main hull sports a sprawling master bedroom that runs across two levels and comes with a folding balcony. Elsewhere, there are five spacious cabins to accommodate 10 guests, along with a giant infinity pool to the aft. The two smaller outrigger hulls, meanwhile, house the crew quarters and requisite machinery. According to the team, this setup gives the yacht a high degree of stability while reducing the amount of vibration and noise.

Adding to the intrigue are side floats that create a private dock at the stern where a chase vessel can be stored. Think of it as a makeshift floating harbor for all of 007’s high-octane water toys.

The design team is certainly not afraid to push the envelope with concepts. Last year, Hombergen and Lucian penned a skyscraper proposal for New York City called the Vertical Yacht. The 1,500-foot luxury apartment complex wasn’t exactly primed for adventures like Bond Girl, though.

“Whether you are the good guy or the villain, this superyacht will be a perfect fit for your next mission,” the designers said in a statement.